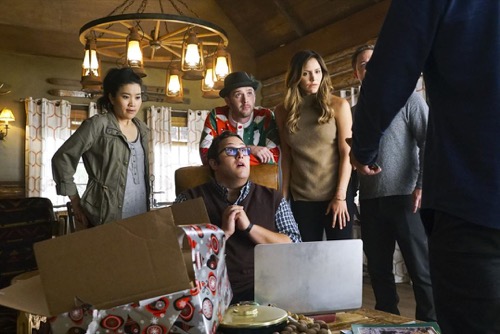 Tonight on CBS their hit drama/comedy Scorpion airs with an all-new Monday, December 12, 2016, episode and we have your Scorpion recap below!  On tonight’s Scorpion season 3 episode 11 Fall Finale as per the CBS synopsis, “The team’s electronics-free getaway in the mountains on Christmas Eve takes a dangerous turn when they encounter a group of gunrunners who kidnap Ralph. (Riley B. Smith) Meanwhile, Tim (Scott Porter) makes an important decision about his role with Team Scorpion.”

Paige and Ralph show up at the warehouse, ready to go with the gang to a cabin for the holidays. Ralph wants to park the car and Walter wants to help. Toby shows Paige the perfect gift for Happy, one she has always wanted. Paige checks her desk and finds a gift with a note from her mom. Walter comes in from the car. Paige asks him to leave his electronics behind – they promised her they would take part in an old-fashioned Christmas. Walter shows Tim his own office (the elevator) with a grade school desk!

Meanwhile, Happy is dressed like a little elf to help Sly’s campaign. It’s the only way to get help with the perfect gift for Toby. The gang arrives at the cabin. The pilot light is out. Walter gets to work. Cabe brings Ralph to go cut down a tree. Tim wants to go too. Walter signs up to go as well. Toby questions why he wants to go.

Cabe shows Ralph how to peel an apple with a blade. Walter is nervous but Tim cheers him on. Tim and Walter go look for a tree. While looking in the woods, the guys see a group of guys from a distance. They are arguing while one digs with a shovel as a gun is pointed at him. Neither Tim or Walter have a gun. They take a can of bug spray and position it over a flame. Just then, the man with the shovels hits the man next to him and then the gunmen. Tim and Walter run. The man runs towards them with a gunmen following. The can goes off like a bomb. The guys help lead the victim to safety as the gunmen lays stunned on the ground.

Cabe and Ralph hear the commotion from a distance. They find Tim and Walter with the victim who works for the ATF. Toby and Paige are baking cookies. Paige thinks they are making way too many. Toby says it is all about the smell. Toby points out to Paige that Tim is a leader and took the position at Scorpion. Happy and Sly show up. Toby likes Happy’s costume!

The guys make it to the cabin. Tim wants the fire out. They are bound to get noticed by the bad guys. But it is too late, they are outside the cabin.

The gang comes up with a plan. Paige answers the door. She invites the bad guy in, who says he is looking for his lost dog. He inches his way in and then steps back out. He tells her he is sure he heard his dog.

The gang uses Walter’s gift to Paige – a laptop – to build a communication device. Meanwhile, the team does their part to plant booby traps (like Home Alone) around the cabin to defend themselves. Tim confronts Walter about being in love with Paige. Walter doesn’t like Tim for disrupting his team. Tim isn’t going anywhere. Paige interrupts their fight.

Happy and Sly are ready to make the call with their device. Cabe calls it in. They get a response that help is on the way. The guys outside have also called for reinforcements, with 2 guys showing up.

As the guys enter, the team takes their places. They play music as they take out the 5. Cabe lines the 5 up while Sam, the ATF guy, takes Ralph, puts him in the car and runs. Paige and Walter chase him. Toby and Cabe follow. Ralph uses the knife to untie himself in the back of the car. He makes his way to the trunk area and pops it, peeking out while the car is going.

A tree in the road stops the chase. Ralph runs to safety! On to the Christmas party. Cabe gives Ralph the knife and Paige lets him keep it. Toby and Happy also exchange gifts and are both thrilled. Paige talks Tim into going and he finally agrees.