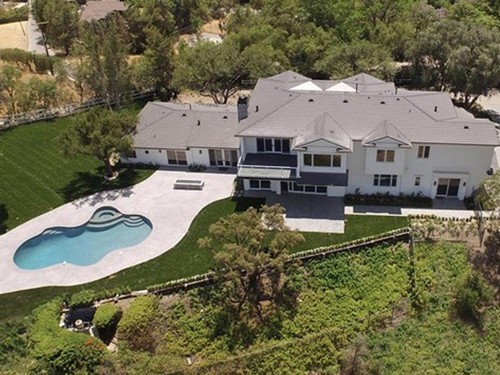 Scott Disick must really want to keep his spy eye on Kourtney Kardashian and Justin Bieber, so much so that he was willing to fork out nearly 6 million dollars on a new house next to the Kardashian Kompound just to stay nearby.

If what Bieber says is true, that he was just being used by Kourtney to make Scott jealous, then Disick has nothing to worry about. But if Kourtney gets a hankering for a piece of the Bieber pie, then you never know when the Biebs might just roll into the Kardashian neighborhood to feed her needs….

Is Disick that insecure? Is he incapable of being “on his own” now that his relationship with Kourtney Kardashian is history? Sure, they will always be the parents of their children, that will of course never change. But that is as far as it goes.

Once Kourtney’s heart finishes up the healing process, there isn’t a chance in hell that she will ever take back the ever so deranged Scott Disick. After all, she’s gotten a taste of Justin Bieber and well, next to Scott, I’d say that’s a much better flavor…. albeit a bit cradle robbing-ish.

Scott of course doesn’t want to come across like the scary stalker guy who can’t move on and get a new life….so he’s putting on the farce that this move is to better himself by having the Kardashian Klan nearby to keep him sober.

Um yeah. Having them in your life has done wonders for your sobriety dude. Keep it up big guy. Good thinking…..we’re totally buying your pathetic cover up.

So, besides the obvious reasons Scott bought this house, what else is there to this gorgeous piece of real estate?

It’s a gem that anyone would love to reside in. With over 8,000 square feet of luxury, this home boasts seven bedrooms and 7 bathrooms, a wine cellar (yeah….I see that as a great place for the likes of Scott Disick), beautiful grounds that include a fire pit, swimming pool, and basketball court.

It’s actually a very private home on a cul-de-sac that should keep the attention starved Disick out of the eye of the paparazzi….wait, what? Yeah…. I am sure he will leave the gate open….