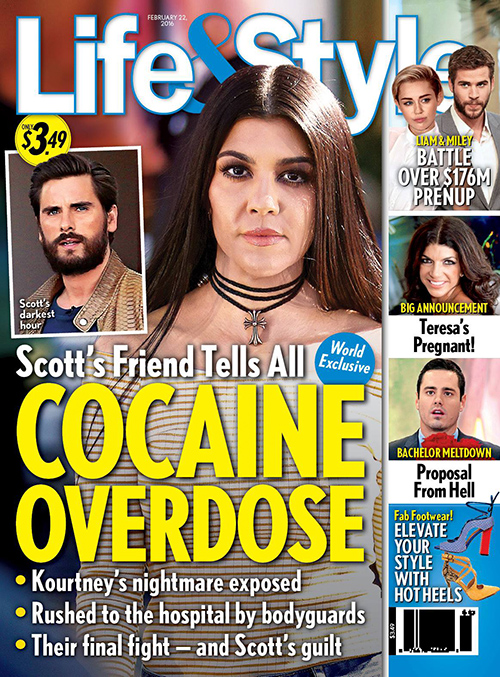 Scott Disick allegedly had a near death experience and was rushed to the hospital after a cocaine overdose. Has the reality television personality vowed to change his ways and begging Kourtney Kardashian for a reunion?

Kourtney’s baby daddy has been in and out of rehab on numerous occasions and everyone thought Disick was finally sober. However, insiders blew the lid off Kourtney Kardashian’s secret shame when they recently told Life & Style that Scott nearly died from a drug overdose on January 31.

After a night of chugging vodka, beer, snorting cocaine, and popping Viagra, Disick was “discovered unresponsive in bed at his Los Angeles home,” a source divulged. Bodyguards apparently rushed the father of three to the hospital where an adrenaline shot was administered in order to revive him.

Friends say this isn’t the first time Scott has overdosed recently. An insider says there have been “sleazy private parties” where Disick has taken Ecstasy, oxycodone, smoked marijuana, and guzzled sizzurp. After one such drug and alcohol-fueled night, partiers thought Disick was dead. These insiders claim it took 30 minutes for friends to shake Scott back to consciousness.

Allegedly, Disick was rushed to Los Robles Hospital on two separate occasions and treated under an assumed name. Bodyguards had performed CPR to revive Scott before he was taken to the emergency room. The source also revealed that Scott has been drunk dialing Kourtney and begging her to come back.

During one of these supposed drunkenly dialed calls, Scott purportedly proposed to Kourtney and asked the “Keeping Up with the Kardashian” star to have another baby with him. However, the insider says Scott never remembers the calls or what he has said the next day.

Recently, Scott Disick and Kourtney Kardashian were on a PDA-filled trip to Williams-Sonoma for a bit of shopping. Of course, the “KUWTK” cameras were filming the entire time. No one should get too excited about a Disick-Kardashian reunion. Scott’s bachelor pad apparently needs some home goods and it looks as if Kourtney was helping Mason, Penelope and Reign’s daddy pick out some stuff for the house.

Does anyone believe it’s possible Scott Disick could nearly overdose twice in a short period of time and live to tell the tale? It’s possible Scott is back to drinking and doing drugs, but a near death overdose? The Kardashians can’t keep anything secret – it seems that something this serious would be nearly impossible to keep quiet for very long.