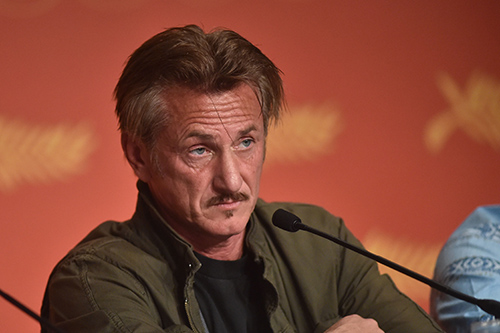 Is Sean Penn finally over Charlize Theron? The actor was photographed with Leila George, 24, enjoying a PDA-filled Hawaiian vacation. We wonder what Leila’s father Vincent D’Onofrio has to say about the Oscar-winning actor dating his beautiful blonde daughter.

Daily Mail published photos of Penn and Leila playfully splashing around in the water and frolicking on the beach Wednesday, October 5. As the sun set, Leila and the 56-year-old actor were photographed kissing. Is Hawaii where Penn woos all his potential fiancées? The beautiful island of Oahu was a special place for Penn and former fiancée Charlize Theron.

The next night, Thursday, October 6, Penn and Leila George walked the red carpet together at the Film Independent LACMA – An Evening with Sean Penn in Los Angeles. The newly-minted couple certainly isn’t keeping this May-December romance a secret.

It’s been nearly 18 months since Charlize Theron dumped Sean Penn and ended their engagement. There were reports that Charlize briefly dated Jake Gyllenhaal following the break-up with the Oscar-winning actor. But Penn hadn’t been romantically linked to anyone – until now.

Charlize kept mum on the reason for their break-up, though it was thought the actress was scared to have Penn around her children because he could fly into a fit of rage at any time for any reason.

Ex-wife Robin Wright has never publicly addressed whether or not Penn’s anger issues were the cause of their marriage ending. The only one who has ever come forward and spoken about Penn’s violent temper is ex-wife Madonna.

The public has seen Penn get physically and verbally abusive with the paparazzi – it’s no secret that Penn is a violent man. Wouldn’t you be more than a little worried if your 24-year-old daughter were dating a guy with a history of serious anger issues?

Vincent D’Onofrio is guy you probably don’t want to mess with. In recent roles, D’Onofrio has portrayed very mentally unbalanced characters – sadistic mobster Patrick ‘The Tooth Fairy,’ Woichik of ‘Feed the Beast,’ and Wilson Fisk of ‘Daredevil’ come to mind. Who knows if that spills over into D’Onofrio’s personal life?

What is Sean Penn thinking dating Leila George? The Australian actress is a year younger than the actor’s daughter Dylan Penn – and a year older than son Hopper Penn. Does this add to the to ick factor? Vincent D’Onofrio is a year older than Leila’s new beau. Leave your thoughts in the comments section below and keep checking CDL for all your celeb news and updates!

In the studio today recording the audiobook of Pappy Pariah’s men-noir “Bob Honey: Who Just Do Stuff” for @audible_com 🎤