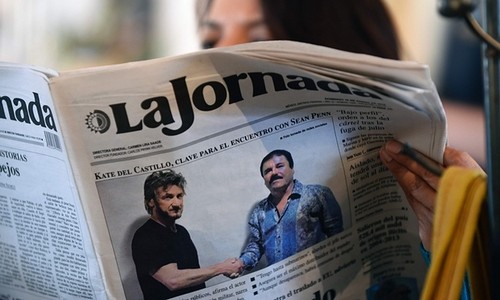 Sean Penn and his naughty sidekick, Mexican actress, Kate del Castillo are under investigation by the Mexican government for their highly secret interview with drug lord, El Chapo, Joaquin “El Chapo” Guzman Loera. Either Sean Penn is really bored and in need of a new movie to work on, legally. Or he’s losing his mind.

Why on earth would a highly successful Hollywood star like Sean Penn want to risk life and limb to get an exclusive interview with an extremely dangerous drug lord (who has murdered and tortured countless victims) by essentially breaking the law and bringing a lot of negative attention to yourself. Is this Sean Penn’s version of a mid life crisis? Of course this is the same Sean Penn who supported the brutal and corrupt dictator of Venezuela, Hugo Chavez.

Perhaps the fact that Penn had Rolling Stone Magazine in his corner, supporting the whole interview, he felt he had all the support he needed. That and the help of his partner in crime, Kate del Castillo. She clearly needs a little more fame on her resume so she chose to pair up with the seemingly off his rocker Sean Penn to gain that needed fame for herself.

The Mexican government is obviously outraged with Sean Penn and the entire situation, so they have naturally launched an investigation into the secret interview between Sean Penn and El Chapo. What sort of consequences could Penn be facing? Who knows. But in my humble opinion, he won’t face charges… not any that he won’t be able to buy himself out of anyhow.

This meeting he had with El Chapo was off the grid in a jungle, yes…it’s like Sean Penn was playing out a movie scene, only it wasn’t a movie, it was dangerously real.

“I take no pride in keeping secrets that may be perceived as protecting criminals, nor do I have any gloating arrogance at posing for selfies with unknowing security men. But I’m in my rhythm. Everything I say to everyone must be true. As true as it is compartmentalized. The trust that El Chapo had extended to us was not to be f****d with. This will be the first interview El Chapo had ever granted outside an interrogation room, leaving me no precedent by which to measure the hazards. I’d seen plenty of video and graphic photography of those beheaded, exploded, dismembered or bullet-riddled innocents, activists, courageous journalists and cartel enemies alike. I was highly aware of committed DEA and other law-enforcement officers and soldiers, both Mexican and American, who had lost their lives executing the policies of the War on Drugs. The families decimated, and institutions corrupted.”

It’s amazing to me that he knew that El Chapo was a really, really bad guy, a monster in fact. But he went in none the less. Sadly, he didn’t go in to try to make a difference, to help fight the war on drugs. No. This was a self serving mission for Sean Penn. El Chapo is sick and twisted. He wants Hollywood to make a movie on him. Why not, right?

We have a slew of movies made on the mastermind criminals of the past, present and future. El Chapo wants a piece of that sick pie. And disgustingly, Sean Penn wants to help make that criminal’s dream come true. This article clearly shows the true colors of Sean Penn and what he is really all about.

No word on what the U.S. government is doing about it or if they even plan to do anything. Maybe they are just leaving it to the Mexican government since the “crime” took place in Mexico.

What do you guys think of all of this? Do you support Sean Penn and his crazed mission? Or do you think he is wrong on all fronts and should pay the piper for what he did wrong?

Sound off in the comments below and tell me how this should all go down.