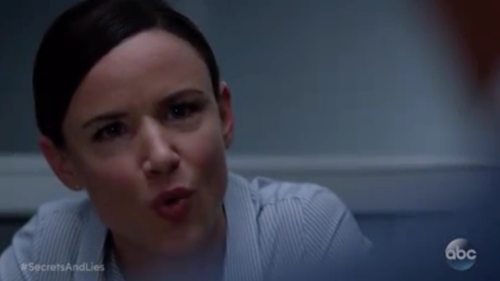 Tonight on ABC their explosive hit drama Secrets and Lies premieres with an all-new Sunday, October 16, 2016, season 2, episode 3 called, “The Liar” Cornell (Juliette Lewis) blindsides Eric (Michael Ealy) with revelations from an ex-girlfriend and a mysterious woman with possible ties to Liam (Graham Phillips) may have been involved in Kate’s death.

Did you watch last week’s Secrets and Lies premiere episode where Eric’s shocking past transgression led Detective Cornell to interrogate him, revealing the first of Kate’s many secrets? If you missed it we have a full and detailed Secrets and Lies recap of the last episode, right here!

On tonight’s Secrets and Lies episode as per the ABC synopsis, “Eric attempts to track down Kate’s missing assistant, Liam, only to find out that he is not at all who he said he was. But was Kate on to him or not? A secret rendezvous Kate had at a sleazy motel only poses more questions about who murdered her. Meanwhile, Cornell confronts Eric with explosive information obtained by questioning his ex-girlfriend Tina Sawyer.

Eric had gone looking for his late wife’s missing assistant and what he found was someone else that was looking for Liam as well on tonight’s episode of “Secrets & Lies”.

The guy that Eric had caught beating up his friend Neil had apparently been across the hall from Liam and unfortunately he had still been dangerous. That guy had ended up pointing a gun at Eric because he was desperate to find Liam and what was shocking was the fact that this mysterious man had also had a photo from the night that Kate died. The stranger had said that the woman in the photo was Carly and she appeared to be with both Liam and Neil enjoying drinks. Yet, Eic didn’t know her and so the strange was walking away when he had stopped because Eric had asked him a question.

Eric had wanted to know where this person he had never had gotten the photo and the stranger replied that Kate had sent it to him. So that was weird and even Eric had thought so. He had later gone to Cornell to report the encounter because he had been worried about Liam and that he thought this stranger might hurt him if he found him. But Cornell had been sort of blaze about everything Eric had told her. Cornell had said that there could be plenty of reasons why Liam might have taken off and that one of them could be the fact that all of the guests had to march out of the building pass Kate’s body on the night she died.

Cornell went on to say that people react differently when they’ve seen such violence yet she mentioned that Eric seemed to be doing just fine. Yet, Eric had said that he had no choice about the matter and he had admitted that he thought Cornell would have been able to help seeing as there was a chance that Liam was danger however Cornell might have known more about Liam than even Eric did. Eric had gone back to his office and his assistant had had some news for him. May had pulled up Liam’s resume like she was asked and it turns out that nothing on anything was true. Including Liam’s name.

But Eric believed he knew why and he had needed time to check out that theory before he could bring it to his father or tell his father that Kate had hired a fraud on purpose. So Eric had done all of that and the eventually, news he had for his father wasn’t good. Eric had looked into the baby that Kate had had when she was sixteen and he later told his father that Liam could have been Kate’s son. Eric explained that the ages added up and that Kate had also been from Boone so it would make sense if her son had grown up there as well. And that he would fabricate so much of his story in order to get to know her.

Eric’s father, on the other hand, didn’t want to be so forgiving. The older man didn’t care if Kate got sentimental or not. He said that Kate had willing allow some guy off the street to have access to their client’s private credit information and that she had been stupid to do that. So Eric had wanted to defend his wife, but he couldn’t because his father had openly voiced a question he had asked himself. Did any of them know Kate? They had all thought they did and now her death was changing everything. She had had a baby and that son could very well have taken advantage of her generosity.

Kate had opened an investigation into Liam or whatever his name because she had suspected that he had been up to something shady and it turns out she was right. Liam had been up to something. He had apparently opened lines of credit with several of their investors and that had been thanks in large part to his position at the company. So Eric had heard that and had gone to his father despite the fact that John was visiting Eric’s mother at the hospital. Usually, none of the kids ever go to see their mother and that’s because she had fallen down the stairs several years ago when she was drunk and it didn’t look like she had been responsive since.

Yet, John goes to see his wife every week and so Eric had to see her as well if he wanted to break the news to John. So Eric went to go see both of his parents and he talked to his father. Eric had told his dad what Liam did and that Kate had recently caught on however his father had been more concerned about the optics than anything else. John had said that they would lose all of their investors if anyone found out what Liam did so he had wanted to keep what happened under wraps. He didn’t want Eric talking to anyone about Liam and that order went especially for the police.

Eric, though, had thought that they should tell the police because he was worried that Liam might have killed Kate to what he did. However, John had said that Cornell was a good detective and that she could figure out everything on her own. So Eric had seen a very ugly side of his father and he had later gone out drinking in order to forget how upset he was. And fortunately, Eric had had his brother to be his designated driver because he had been in no position afterward while he had been in a great situation to talk.

Eric had talked to Patrick about their dad although he did leave the important bits out and Patrick had been there for him when Kate’s ex-showed up at his front door. Kate’s ex-boyfriend Shane had stopped by the apartment because he had seen Eric hanging outside of his shop and had just wanted to reassure Eric that he hadn’t been having an affair with Kate. He said that Kate had come to him to put a tracking device on an Ipad and that he hadn’t known what it was for. So Eric had actually looked into that on his own and had found out that Kate may have given that Ipad to his blackmailer.

So Eric had a chance to tell Detective Cornell all of that when she called him to come down to her office. The detectives had said that she looked into Tina who had been Eric’s ex-girlfriend and she said that Tina had filed many false abuse claims against boyfriends that dumped her. Though when Cornell had said that she was willing to talk to the judge to get his restraining order against Tine extended, Eric had ignored the opportunity to tell the detective about his wife’s secret Ipad and like a lot of things that information became part of his secret investigation.

Eric believed that he could find his wife’s killer on his own so kept things to himself and was intent on tracking down Liam on his own as well when he came across the mystery man as earlier, but that time the stranger had appeared intent on torturing Liam’s girlfriend for information.