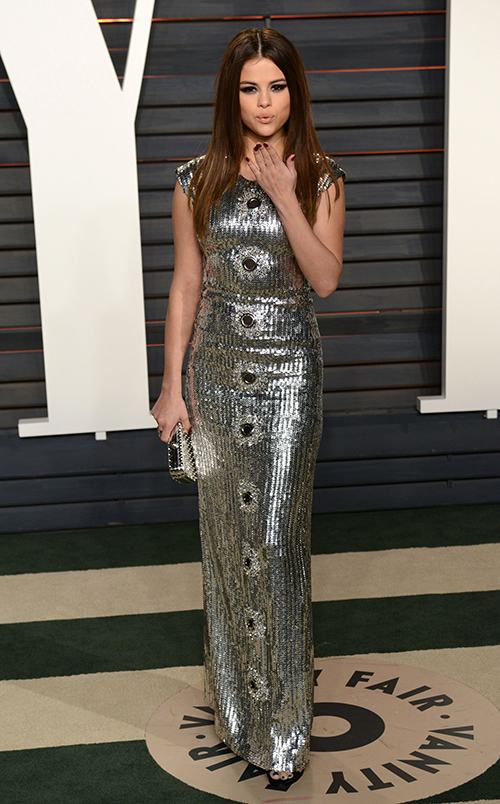 Is Selena Gomez actually brave enough to hook up with and date Taylor Swift‘s little brother, Austin? SelGo and Taylor are BFFs, so it’s hard to say whether or not T-Swift would be in total support of this pairing or in total disgust. Who knows? In the past, Taylor expressed MAJOR FEELINGS (mostly bad ones) regarding SelGo’s choice in men, particularly Justin Bieber, so maybe T-Swift would be totally cool with them hooking up. At least she’d know that her BFF is in good hands.

Honestly, I have a hard time believing that they’re dating, mostly because the evidence is slim at best. They were all spotted out at the Vanity Fair Oscars Party on Sunday night where, reportedly, Selena Gomez and Austin were inseparable. That’s all fine and good, but the source admits that Taylor was with them most of the time, except for a brief moment when they were spotted dancing together. GASP! Does this mean they’re going to get married?

The source says, “There wasn’t one time that I didn’t see them together. Granted, Taylor was also with them, but at one point it was just the two of them dancing. Selena and Austin weren’t holding hands or anything like that, but they do make a good-looking couple, and they looked like they were having a great time together.”

If I had to make a guess, I’d say that SelGo and Austin are just friends, and rightly so seeing as how the two girls are so close. It’s only natural that Selena would feel comfortable around T-Swift’s younger brother.

You be the judge, though. Is there something more going on here that we should watch out for?