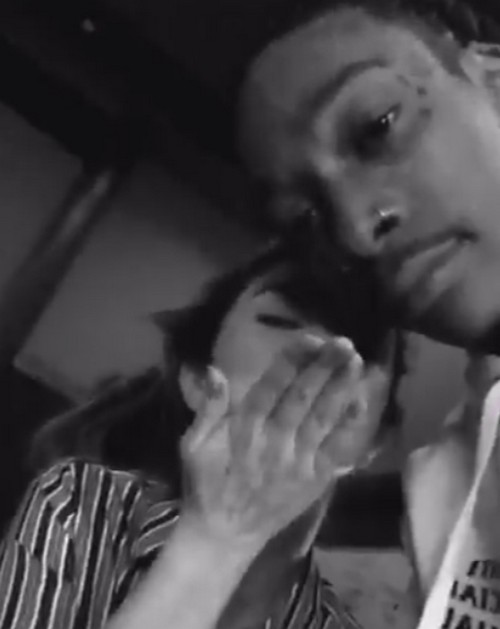 Selena Gomez has a new man in her life – rapper Wiz Khalifa! Selena Gomez and Wiz Khalifa are collaborating on a new song together, and have been spending tons of time together at the studio. Wiz has even shared videos of the unlikely duo goofing around during their jam sessions.

And, according to a new tabloid report – SelGo and Wiz are much more than just friends. Justin Bieber and Amber Rose must both be freaking out at this report.

The insider goes on to say, “Selena is playing with fire, not just with Amber [Wiz’s angry baby-mama] but also because Wiz is a terrible influence.”

Recently Selena Gomez has been partying hard…again, and considering her battle with Lupus is an ongoing issue, sitting in a studio filled with people smoking marijuana and pounding shots of tequila at Texas bars are really not things the singer should be partaking in.

OK! Magazine’s source added, “Selena’s health is still in no condition to deal with partying —she needs rest and as little exposure to booze and drugs as possible— there’s no chance of that if she’s hanging out with Wiz.”

Of course, Wiz Khlaifa’s baby-mama Amber Rose is not impressed with his new girlfriend, but SelGo doesn’t seem to be too fazed by her. Hey, maybe Amber Rose and Justin Bieber could hook up and bond over their mutual dislike for the new couple. Biebs has spent the better half of this month trying to win Selena Gomez back on social media.

Do you think that Wiz Khlaifa and Selena Gomez could be Hollywood’s next hot couple? Who do you think is more upset about them dating, Justin Bieber or Amber Rose? Share your thoughts in the comments below!