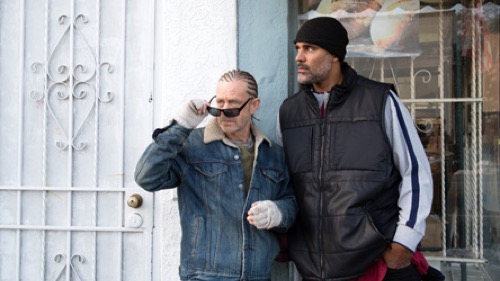 Tonight on Showtime the uniquely twisted and highly entertaining show Shameless returns with an all new Sunday March 6, season 6 episode 8 called “Be a Good Boy. Come for Grandma” and we have your weekly recap below. On tonight’s episode, Fiona, (Emmy Rossum) now living with Sean, tries to get his son, Will, to like her. He starts to come around, but when Will snags one of Carl’s (Ethan Cutkosky) guns at the Gallagher house.

On the last episode Carl struggled with Nick’s absence and remade the Gallagher home into his “crib.” He invited his friends over to party and make music. Frank and Queenie ruled the house, and Debbie returns when she was let go by Erica and Tyler. Did you watch last week’s episode? If you missed it, we have a full and detailed recap right here for you.

On tonight’s episode as per the Showtime synopsis, “Fiona, now living with Sean, tries to get his son, Will, to like her. He starts to come around, but when Will snags one of Carl’s guns at the Gallagher house, Sean catches him and becomes furious with Fiona because he fears he will lose custody.”

Tonight’s Shameless season 6 episode 8 is going to be great, and you won’t want to miss it. So be sure to tune in for our live coverage of Shameless — tonight at 9 PM EST! While you wait for our recap, hit the comments and let us know how excited you are about the new season of the Shameless?

Tonight’s episode of Shameless kicks off with breakfast at the Gallagher house – Queenie is in town, and she and Frank have prepared breakfast with love, Quinoa pancakes and Yucca fries, Queenie passes out everyone’s vitamins and forces them to all eat together and sing with her over breakfast.

There’s a knock at the door – it’s Lamar, and he is looking for Carl. He tells Carl that G-Dogg has a shipment coming in tomorrow, and he has to run it. Carl says he wants to sit this one out. Lamar punches him in the face and says that is not an option, he is “in the game for life.”

At Sean’s house, Fiona is cooking breakfast – she and Sean’s son Will are having growing pains, he is not happy that Fiona has moved in. Fiona offers to go stay at home during his visit, but Sean wants her to stay. She promises Sean that everything will be fine and tells him to go to work and she will spend the day trying to win over Will.

Back at the Gallagher house, Frank and Queenie are having bizarre and graphic sex. Nobody needs to see Frank Gallagher having sex. Carl interrupts – and announces that the bedroom smells horrible. Carl needs some fatherly advice, he tells Frank that he needs to get out of the game. He loves the “honies and money” – but he is upset that he lost his friend Nick. Frank tells Carl to take a break today, and offers to do his rounds for him. He gives him a pep-talk about how he is the breadwinner in the family and he can’t let them all down.

Ian is busy at his boyfriend’s house, he’s studying for the EMT test. Meanwhile, Lip wakes up to a sorority girl crawling in to bed with him. Over at Sean’s house, Fiona is trying to get Will to hang out with her. He agrees to go ride the segways with her – but warns her that she is not “going to be his new mommy.”

Carl heads to V’s house to get stitches form Lamar knocking him out. V wants to know what happened, he explains that Lamar was mad because he didn’t want to work for him anymore. V warns Carl to stop running around like a black scarface – and “get out of that shit” before it is too late.

Debbie runs in to a guy named Larry at the baby store. She helps him pick out a stroller for his sister. Apparently he doesn’t mind that she is a pregnant teen, and much younger than him, and he takes her out for lunch.

Frank got some corn rolls – and looks ridiculous – he hits the streets to do Carl’s runs for him. He stops by a shop and the storekeeper basically laughs in his face. He tells Frank that the only reason that he paid Carl was because he had a “big scary black man” with him.

V shows up at the bar – she tells Kevin that he needs to talk to Fiona about Carl. She promised Carl she wouldn’t tell his sister, but that doesn’t mean that Kevin can’t say anything. He whines that he doesn’t need to get in the middle of it, but V says Carl needs help with his “gang shit.”

Over eggplant parmesan, Debbie and Larry get to know each other – and he is laying it on thick. Something seems off with him, but Debbie is so thrilled by the attention, she is totally oblivious. It’s a little creepy when she tells him that she is 7 months pregnant and he doesn’t even bat an eye.

Frank marches in to the barber shop and announces that he needs a “big scary black guy.” He makes friends with a guy named Gareth and pays him to follow him down the street and stand outside as his muscle. Frank’s not happy when Gareth demands over half of the money that he makes.

Fiona gets called to the Alibi by Kevin – she brings Will along with her. Kevin explains that Carl got knocked out by gangbangers over “drugs and money.” Fiona is upset and she grabs Will and rushes out of the bar, he stops to admire puke in a passed out woman’s hair.

Frank heads home and is thrilled with all of the money that he made. He finds Carl in the front yard burying land mines – it’s his new defense system since he is “going straight.” Frank says that he wants to tag along with him on his drug run tomorrow, to make some more fast cash. Carl says he isn’t going. Frank shouts that he has “let him down” and stomps inside.

Fiona finds Carl upstairs making an escape route in case he needs to bail from the second floor. Carl says that Nick is gone, he tells Fiona that he murdered a kid. Carl wants to get out of the game because he can’t get the dead body out of his head and doesn’t want to see any more killing. Fiona hugs him and says that she is proud of him.

Larry drives Debbie home after their date – he tells her how beautiful she is and then creepily kisses her stomach for way too long. He wants to take Debbie on another date tomorrow – she is so thrilled about the idea of going to a restaurant that requires reservations that she ignores the fact that he is a total wierdo.

Lip is in bed with another sorority girl – and he still can’t get it up. She whines that it “feels like a marshmallow.” Lip takes his phone out and holds it behind her head so that he can get hard. And, it works like magic.

Frank tracks down G-Dogg to try and convince him to let him have Carl’s job. Lamar is skeptical, he warns Frank that this doesn’t mean that Carl is off the hook. He gives Frank the package and says that if he is not in Indiana by tonight, then he is going to “cut off his left nut.” Frank heads off to try and find a car to get to Indiana.

Sean takes Carl to meet up with G-Dogg and tell him that he is done. It costs Sean all of his clothes, and his car – G-Dogg agrees to let Carl out of the game. Carl and Sean walk home in their underwear, Sean offers Carl a job at the restaurant as a dishwasher. They finally get home – and are shivering – Fiona fawns over them and gets dinner ready. Sean heads upstairs and finds Will playing with one of Carl’s guns – and he is not a happy camper.

Frank is being a total screw-up, and apparently isn’t concerned about his left nut. He tracks down his new muscle Jareth and they sit down to sample the package. After Frank gets Jareth coked up – Jareth doesn’t want to give the package up. He takes half of the coke and replaces it with baby laxative.

Debbie heads to Lamaze class and runs in to Larry – who is there with his other pregnant girlfriend. Larry explains that he is a “maiseophile” and has a pregnant girl fetish. His girlfriend doesn’t mind sharing Larry, but Debbie isn’t having it, she screams that Larry is a freak and leaves.

Back at the Gallagher house, Queenie and Lip are bonding. She gives him a foot massage and works on the pressure point to his sex organ. Lip is skeptical – but after she gives him an erection, he is pretty sure that her holistic witchery is the real deal. “Queenie To The Rescue!” she shouts.

Meanwhile, Sean is screaming at Fiona – to the point that she is actually scared, and it doesn’t take much to scare her. She cries at him to stop yelling at her. Sean is furious, his ex-wife is going to take away his custody and never let him see Will again. Fiona heads back inside and she and Carl get all of his guns that he has hidden around the house – in the couch, in the fish tank, and in the refrigerator.

After an awkward dinner with his boyfriend’s ex – Ian and his boyfriend head back to his house to have sex. Ian gets a bit of a shock when he confesses that he is HIV positive. He reassures Ian that he is on meds and can’t pass it on.