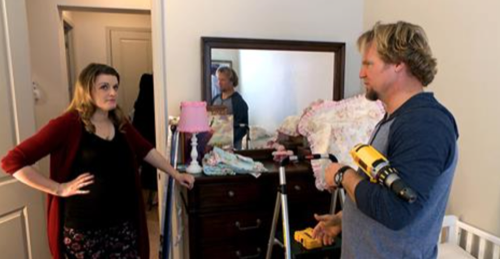 TLC’s reality show Sister Wives returns tonight with an all new Sunday May 22, season 6 episode 17 called “Thanksgiving: The Good, the Bad the Ugly” and we have your weekly recap below. On tonight’s episode, Meri and Janelle decorate for the family’s Thanksgiving dinner as part of their therapy to heal their relationship

On the last episode, Meri tried therapy with Janelle in an attempt to put the catfishing incident behind her, but Janelle worried that their session could open up old wounds; also Aspyn prepared to move back home, but not to her mother’s house.

On tonight’s episode as per TLC’s synopsis, “Meri and Janelle decorate for the family’s Thanksgiving dinner as part of their therapy to heal their relationship, but their first planning session gets off to a rocky start.”

Its Thanksgiving and the Brown family usually likes to go all out for the holidays, but on this season of “Sister Wives” they were hosting at least seventy people for dinner. Apparently schedules can be conflicted with all the kids so the only assurances that they have with the older set coming home and the family being all together is Thanksgiving. And therefore Kody if not the whole family decided to amplify things recently. Though carrying out all those plans wasn’t easy and it did seem as if the family had taken on more than they can chew.

Kody for instance had wanted to put up the grand light scheme that he had last used for the commitment ceremony back in 2013. So what ended up happening was that he spent most of his time unwinding cables and getting up with that. And then there was the frustration with how long it was taking and how hard it was putting up so many lights between the houses. But ultimately Kody’s biggest problem proved to be wind.

On the day he set out to get all the lights up, the wind had come out in full force and that had made thins hazardous. Kody couldn’t really climb up to the top of the ladder if there was a chance that the wind could knock him off. So what Kody tried to do was just climb partially to the top and see if he could still get the job done. And it turns out that the results weren’t as good so that’s when Kody stopped caring about personal safety but instead focused on just getting things done right.

He climbed up on top of the ladder when he knew that no one besides Christine and his son were looking. So he was able to get all the cables and wires together. Which he already knew was going o look good at dinner. Yet, he had frightened the living daylights out of Christine because she knew that none of the other sister wives would have ever have allowed Kody to go through with climbing on literally the top stop.

It’s dangerous for a reason!

However, the sister wives also struggled through the holidays although they thought that this season would be easier. Only it looks like Mari and Janelle still have a few things to work through. Meri and Janelle have been making some progress in therapy and they’ve been doing their best to understand the other’s position whenever they have a disagreement. So they are getting better at being friends, they just shouldn’t have tried to decorate together.

Janelle has admitted in the past that she’s bad at it. So at first it had seemed reasonable to go to Meri for help, but their personalities again clashed when it came time to decorate. Meri had gone out and picked up a lot of stuff that she liked so she had shown them to Janelle. And Janelle had liked them, but she felt like Meri had already gotten everything they needed so she began to disengage because she would have liked to have been on the decision process.

Only Janelle didn’t say that. Janelle say that was good and she later helped out in decorating the tables pieces though throughout the whole thing she remained disengaged and Meri eventually caught on. Meri is someone that does what she sets out to do so she couldn’t understand why Janelle was walking around when there were things to do. So Meri had seen firsthand the second Janelle disengaged. And she didn’t know what to do about it.

Before therapy, Meri would have made a comment or a joke. Or she could have possibly have tried to do everything herself. Though thankfully she didn’t have to worry about that with the decorations because she had already brought others in after she mentioned that there was a chance Janelle would take a step back which was what ended up happening. So maybe Janelle should have tried harder to stay present.

And yet Janelle realized what she was doing however she didn’t know how to stop it once it was happening. Janelle had kept on trying to help out and she had a few things. But there came a point when she wondered if checking out was merely part of her personality. So she had given up on trying not to give up.

Nevertheless, despite the upsets, Thanksgiving’s dinner was a success. Meri and Janelle couldn’t work together though Meri could work with Christine who had taken flak from Kody for her. And the dinner table was set in a way that they both approved of.

And Hunter, who has been away at doing prep courses for the military, got to celebrate Thanksgiving with his whole family.