BY Kristine Francis on July 18, 2016 | Comments: one comment
Related : Reality TV, Recap, So You Think You Can Dance, Television, TV 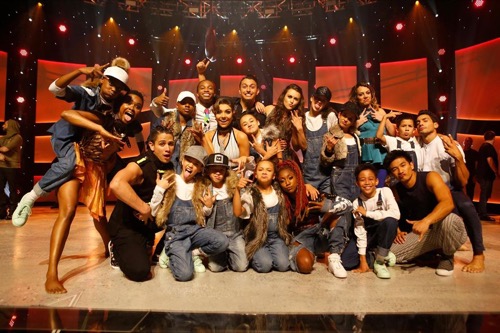 Tonight on FOX, SO YOU THINK YOU CAN DANCE continues with an all new Monday, July 18 season 13 episode 7 called “The Next Generation: Top 10 Perform + Elimination,” and we’ve got your So You Think You Can Dance recap down below. On tonight’s episode The Top 10 dancers perform again, but this time, one of them will be eliminated.

On the last episode, after national auditions and the grueling Academy, the Top 10 got their chance to shine for the first time live on the SYTYCD stage. Did you watch last week’s episode? If you missed it, we have a full and detailed So You Think You Can Dance recap right here for you.

On tonight’s show per the FOX synopsis “after the Top 10 danced their hearts out for the nation’s vote, one dancer must say goodbye. Who will stay in the running to become America’s Favorite Dancer? Find out who makes their way into the Top Nine.”

Tonight’s episode was off to another great start for the Top 10. Their opening Bollywood performance that was choreographed by the famed Nakul Dev Mahajan was considered to be just the way to start things off what with the music involved as well as the smiles it put on this year dancers’ faces. However, nothing can remain just fun and games forever so the Top 10 were given their biggest test yet. Tonight they had to face the dreaded eliminations.

Unfortunately, eliminations are a fact of life however, there have been a few that made sure to shine with something like that hanging over their heads and such was the case with the first official act of the night. First up was twelve-year-old Ruby and her dance partner fourteen-year-old Jordan and together they had to dance an African number. With the colorful costumes and face paint included. Yet, the two girls had rose to the occasion because they had managed to impress the judges despite one of them stepping out of her genre. Ruby as many of you can recall was Latin ballroom. So contemporary dance was technically new for her and the fact she managed to excel as it proved that she could diversify.

The second performance on the other hand, proved that they weren’t quite ready to try something that new. Emma and JT were both a mere ten-years-old, but last week they had each impressed their judges in their own right so the judges were kind of expecting to see that again and sadly they weren’t left feeling that way after tonight’s performance. JT and Emma’s take on a fast paced hip hop number had fallen short. As it happens JT couldn’t quite keep up with Emma who was taller than him and so that ended up hurting the performance altogether. Although Nigel did give JT some tips on improving.

After Nigel had basically called what he seen cringe worthy, he did say that JT should keep in mind his short torso. So JT now had something to seriously consider for the next time. But following JT and Emma was Jake and Tahani. Jake was a flirt and Tahani was only newly emerging from her shell yet together they just somehow worked.

Jake and Tahani had been given a contemporary piece by a new choreographer and again they were pushed outside of their limits. Jake was usually ballroom while Tahani was usually hip hop. So you would think that as well as their clashing personalities would come into play. Yet, the truth was anything but because it had looked as if Jake and Tahani have always danced contemporary and there was also the fact how well they danced together. Jake had been told last week that he packed quite a punch for being a little guy and when he had been paired with his mentor he had truly looked small in comparison. And yet next to Tahani who also taller, the judges barely noticed the difference.

Sure, Nigel had commented that it was good thing that Tahani was at least closer in height to him though what the judges were more focused on was the message in their dance. No one had mentioned the message in any of their earlier acts so Jake and Tahani had set themselves apart by committing to a message that no one would forget. Jake and Tahani had performed a dance based on the brutal applications of bullying and by the end of it they had received a standing ovation from judges and audience alike. Which was also the first of the night.

Though Daniela and Sheaden who were tonight’s fourth pairing didn’t fare as well. Daniela had slightly unraveled during rehearsal and so some of that stiffness from then came out on the stage. She had been stiff with her partner who was dancing outside of her genre while ballroom was her thing. So if anyone should have been nervous about the dance then it should have been Sheaden although to be fair he hadn’t impressed the judges either.

Paula had said that they forgot to have fun which was very important because it serves to loosen them up. But otherwise the judges that included tonight’s guest judge Snitch had given them good critique. They had enjoyed the dance after all and so that had given the judges some hope about what they were capable of however what was hurting some many performers was the chemistry. Either the dancers gelled well or they did not and that wasn’t something anyone could change.

Tate and Kida were the last pairing of the night and together they danced a hip hop number. So Tate who was a ballerina at heart had gotten some feedback where she was asked to be careful about this and that she try dipping lower. However, the judges ended up enjoying Tate and Kida together because they had good chemistry. Chemistry is a bit odd when speaking about children though so it’s safer to say that they danced as if they were having fun and that helped the audience connect because they ended up having fun too.

Yet, the second half of tonight’s episode did see some overall improvement. Emma and JT had performed a contemporary piece next and there JT had been able to shine just a little bit more. Only it hadn’t been enough for him or for the dance. There were judges like Snitch and Maddison that liked it and then there was Nigel. Who for some reason couldn’t fully enjoy a dance with Emma and JT in it. So their second performance was an improvement for JT and Emma although they did not regain some of the footing they lost after their amazing performances last week.

Meanwhile Ruby and Jordan were simply great together. They had initially impressed the judges with their African dance yet their later contemporary number had cemented something. It had showed how graceful Jordan could be under pressure as well as on a slippery surface because she could have fallen after she danced on a piece of cloth on the stage. Although it important to note that she didn’t and as for Ruby she had fully proved that a switch in genre couldn’t face her. She had kept up during the faster African dance and had been just as graceful as Jordan during the much slower contemporary piece.

So Paula for one had simply loved these two. But Snitch’s favorite was Tate and Kida. Tate and Kida had danced another hip-hop number for their second performance and again the judges enjoyed it though Snitch probably enjoyed it the most what with singing in tune with the beat from his judges’ chair. And so the only thing that Snitch could tell the guys that they needed to work on was Kida’s arms. He thought that Kida should pay a little more attention there because that’s what his eye kept noticing as Kida was popping and locking.

Nigel’s and Maddie’s favorite though was Tahani and Jake. Tahani and Jake had come back onstage to perform an upbeat jazzy number and Nigel happened to loved them together in spite of the many things he saw wrong. He thought that their footwork was slightly off and that their kicks could have been a pointer. Yet, he ultimately said that he couldn’t help loving their dance because of the energy that both Jake and Tahani brought to it.

And for tonight’s most improved which was Sheaden and Daniela, it ended up being heartbreaking news that it was them rather than anyone else that was up for elimination.

Daniela and Sheaden had made a comeback with their second performance of the night because they had kept it loose and they also appeared to be finally dancing together as a partner. However, it seems that was too little too late. So it was the both of them that were in the bottom two on tonight’s episode. And yet it was Daniela that was eliminated from the competition.