BY Heather Hughes on February 3, 2016 | Comments: 5 comments
Related : Days of Our Lives, General Hospital, Soap Opera, Spoiler, Television, The Young and the Restless 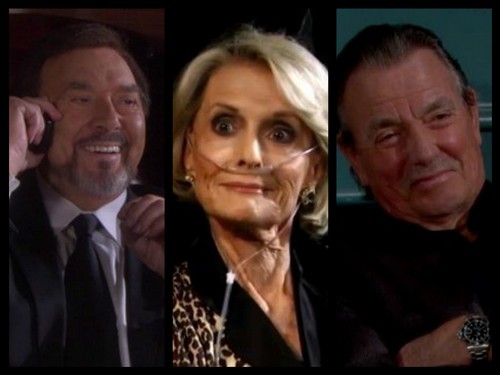 Villains are a huge part of what makes soaps so much fun. The characters we love to hate often move storylines forward and create jaw-dropping moments. Many baddies have come and gone from our beloved soaps, but there are three that rise above the rest of the pack. Let’s look at these major players and try to determine who would win in a villainous battle.

First, we have Stefano DiMera (Joseph Mascolo) on “Days of Our Lives.” Stefano was recently murdered by Hope Brady (Kristian Alfonso), but he was certainly a force to be reckoned with during his time on the NBC soap. If there was a devious scheme in play, there was always a good chance Stefano was behind it.

Stefano had eyes and ears all over Salem. It was nearly impossible to pull one over on “The Phoenix.” Stefano valued family loyalty above all else and he loved his children dearly. However, Stefano was willing to wreak havoc in their lives if they didn’t stay in line. It was all about carrying on the DiMera dynasty and Andre (Thaao Penghlis) hopes to keep his father’s legacy going for years to come.

Next, there’s Victor Newman (Eric Braeden) on “The Young and the Restless.” Victor has done so many dirty deeds that he spends much of his time fighting the revenge plots of his enemies. Of course, no one ever really gets the vengeance he or she craves. Victor typically manages to get off scot-free.

It doesn’t hurt that Victor has plenty of money to throw around. Victor can make problems disappear in an instant and he’s got a running tab going at “Doppelgangers R Us.” Victor treasures his family, but he has difficulty showing it. He often hurts the ones he loves. Victor isn’t afraid to play hardball in an effort to get what he wants.

Finally, we have Helena Cassadine (Constance Towers) on “General Hospital.” Although Helena is dead (at least for now), she had a good run when it comes to stirring up trouble. From brainwashing and kidnapping to blackmailing and poisoning, Helena would do anything to further her own agenda. She wasn’t afraid to play favorites and anyone who stood in her way was usually toast.

All three of these characters were downright deplorable, but which one would win in the ultimate faceoff? Honestly, there probably wouldn’t be anyone left standing. With all of this evil and power, it’s tough to believe that any of them would survive what the others had in store. They’d reach beyond the grave for retribution if they had to.

Still, you might have a favorite that you think would reign supreme. Would you bet on Stefano, Victor, or Helena? Sound off in the comments below and let us know which soap villain takes your top spot. Come back to CDL for all the best soap news and spoilers!