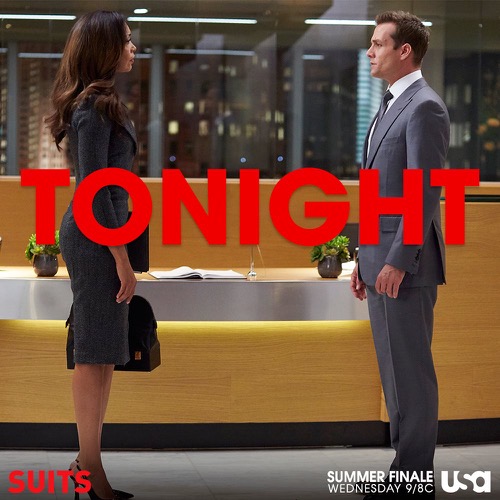 Tonight on the USA Network their critically acclaimed drama, Suits returns with an all-new Wednesday, September 7, 2016, episode and we have your Suits recap below. On tonight’s Suits episode called, “P.S.L., ” Jessica (Gina Torres) and Rachel (Meghan Markle) fight to save Leonard Bailey’s life.

Did you watch last week’s episode where Mike (Patrick J. Adams) cut a deal and he left prison crying?  If you want to get caught up before tonight’s episode we have a full and detailed Suits recap for you, right here.

On tonight’s Suits Season 6 Episode 9 episode as per the USA Network synopsis, “Harvey (Gabriel Macht) and Louis (Rick Hoffman) try to convince their oldest and most loyal client to stay in an attempt to keep other PSL clients from jumping ship.”

With just one episode left before the mid-season finale, tonight’s episode looks like it is going to be great.  So make sure to bookmark this spot and come back for our Suits recap from 9PM – 10PM ET!  While you wait for the recap make sure to check out our Suits recaps, spoilers, news & more, right here!

Tonight’s finale of Suits kicks off with Mike Ross and Harvey out for drinks – Harvey surprises Mike and offers him a job. Mike doesn’t want to accept after everything that he put them through – Harvey convinces him to think about it.

Jessica has a flashback at her office of her parents fighting – teenage Jessica is devastated when she hears that they are splitting. She snaps out of it and heads in to her office, Harvey is waiting for her. Jessica tells Harvey that since Mike is free, it is time to get their heads back in to the game and focus on the firm.

Rachel’s father Robert Zane stops by Jessica’s office – he warns her and Harvey that their biggest client, Jim Reynolds, is shopping for a new law firm behind their back. Jessica is on her way to trial – Harvey tells her she needs to cancel and go see Reynolds, but she refuses to bail on Leonard Bailey. Jessica tells Harvey that if he cares so much – he should go meet with Reynolds.

Harvey heads to Reynold’s office, he learns that the reason they are shopping around for a new law firm is because they heard that Harvey intentionally tanked Sutter’s case and they can’t have someone defending them who is not loyal to their clients. Harvey heads back to the office in a huff – he learns from Louis that another client is threatening to drop them because of the Sutter case too.

Rachel heads home after her and Jessica’s first stressful day in court. Mike gives her a pep-talk, he seems to have some helpful insight now that he has been through court and prison.

Louis’s girlfriend Tara shows up at the office and she drops a bomb on him – she is pregnant. Louis is thrilled, and then she reveals that it’s not his, it’s his ex-boyfriend Adam’s baby. Louis has an epiphany, he doesn’t care, he promises to raise Tara’s baby as if it were his own.

Harvey tracks down Jessica, he tells her that she needs to go to Reynold’s next board meeting. He explains that Sutter is telling everyone he tanked the case. Jessica is going to take care of Reynolds, but she tells Harvey that he needs to shut Sutter up.

Harvey shows up at Sutter’s front door. He tells Sutter that he needs to repair his reputation and get the other clients to stop dropping him. If he doesn’t, then Harvey is going to make sure that his house is repossessed before he gets out of prison.

In court the next day, Mike convinces Jessica to let Leonard Bailey take the stand and tell his story for the jury. Rachel is surprised when Jessica has her question Leonard, she does an impressive job – and Leonard’s testimony is moving, they may have a chance of getting his case thrown out after all.

Later that night, at home, Mike congratulates Rachel on her job in court. Rachel is going through her case files and she has an epiphany – she realizes that the victim’s father, Forrester, who testified in court, is hiding something.

Late at night, Stu [the stockholder] pays Louis a visit. Apparently his firm is bailing on them too and is going to back out of the lease and leave the office.

Rachel and Mike head to Forrester’s house at night – they accuse him of sending Maria [the witness] away so that she couldn’t testify against Leonard years ago. Of course, Forrester denies their allegations. After, they head to Jessica’s office and tell her what they did, and what they suspect, she of course freaks out – Mike and Rachel could have just blown the entire case.

And, there’s more bad news. Donna tracks down Harvey and tells him that Reynolds called the office – they have moved the board meeting that Jessica is supposed to go to, to tomorrow. If she doesn’t show up, they will lose their client for good.

The next day Harvey and Louis track down Jessica at court – they were calling her all night. Harvey and Louis explain to Jessica that she needs to go to the board meeting to save their client Reynolds. Jessica scoffs that she can’t leave Leonard, and she won’t hang him out to dry to go participate in a corporate power struggle.

Jessica calls Forrester up to the stand, she manages to get him to admit to sending Maria away and paying for her to go to an out of town rehab so that she couldn’t testify on Leonard’s behalf. If Maria hadn’t skipped town, Leonard wouldn’t have been convicted. With forrester’s confession, the judge has no choice but to exonerate Leonard – he’s a free man and Jessica and Rachel are victorious.

After court, Robert is waiting for Jessica in the hallway, he congratulates her on her win. Then he makes a shocking offer, he wants Jessica to merge with his firm to save her company. Robert admires that Harvey tanked his Sutter case to save Mike, and they have done so much for his daughter Rachel. Jessica appreciates his offer, but turns him down.

Jessica doesn’t show up at the meeting, but Harvey, Louis, and Stu but their legal and financial powers together to find a way to handle their Reynolds issue and force him to stay with their firm.

Rachel and Mike head home, he congratulates her on her case and gives her a gift to celebrate. Then Mike reveals that Harvey offered him a job as a consultant at the firm – he still hasn’t decided if he will take it.

Louis and Harvey head back to the office and tell Jessica the good news – they saved the company. They want to celebrate. Jessica says that it is not her firm any more, she has decided to step down. Jessica reveals that at some point she lost her way, she became a lawyer to help people. Louis is livid, he shouts at Jessica that she can’t leave them, not after all the work they put in to saving the firm. Jessica’s mind is made up, she has to do this. They share an emotional toast and final drink together.

Louis heads to Tara’s office afterwards, she is working late, he gets down on one knee and proposes to her. Through her happy tears, Tara accepts. Louis is getting married!

Jessica shows up on Jeff’s doorstep – she wanted to talk to him before he left for Chicago. She tells him that she quit the firm and she wants to move with him. She doesn’t want to be a corporate lawyer anymore.