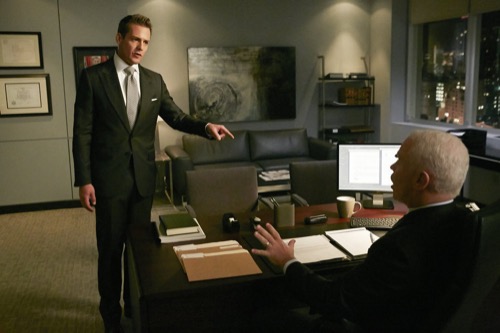 Tonight on the USA Network their critically acclaimed drama, Suits returns with an all-new Wednesday, September 7, 2016, episode and we have your Suits recap below.  On tonight’s Suits episode called, “The Hand That Feeds You,” Louis (Rick Hoffman) faces his anxiety about Tara.

Did you watch last week’s episode where Mike (Patrick J. Adams) cut a deal and he left prison crying?  If you want to get caught up before tonight’s episode we have a full and detailed Suits recap for you, right here.

On tonight’s Suits Season 6 Episode 9 episode as per the USA Network synopsis, “To protect Mike (Patrick J. Adams), Harvey (Gabriel Macht) considers putting Gallo back on the streets. Jessica (Gina Torres) and Rachel (Meghan Markle) get Bailey’s case re-opened, but winning it is no slam dunk. And Louis (Rick Hoffman) deals with his anxiety over Tara.”

With just one episode left before the Summer finale, tonight’s episode looks like it is going to be great.  So make sure to bookmark this spot and come back for our Suits recap from 9PM – 10PM ET!  While you wait for the recap make sure to check out our Suits recaps, spoilers, news & more, right here!

Tonight’s episode of Suits kicks off with Louis and Donna at a spa, they’re taking mud baths. Louis pours his heart out about his relationship woes with Tara, her boyfriend Joshua just returned to town and Louis wants Tara to dump him.

In prison, Harvey visits Mike. Mike is surprised to see Harvey, he’s supposed to get out later that afternoon. Harvey tells Mike that he needs to sit tight and keep his wits about him, he is going to be in prison for a few more days. Apparently, Cahill called and there was a problem with his release.

At the office, Rachel and Jessica are working on Leonard Bailey’s case. Rachel thinks that she may have found a precedent that could help them getting Leonard released. Jessica is impressed with her research.
Mike heads back to his cell, Kevin is freaking out – Cahill apparently seized all of his wife’s assets, even money that she made not through her father’s inside trading. Now his family is stuck without any money. He tells Mike that he needs to fix it ASAP, he is the one that convinced them to take the deal in the first place.

As Harvey is leaving the prison, he runs in to Gallo. Harvey tells him that he filed his paperwork. But, Gallo better keep up his end of the bargain and keep offering Mike protection.

Mike calls Cahill and demands to know what he is doing. Cahill says that Kevin’s wife Jill made that money by stealing from hardworking people. He has a personal grudge because Sutter’s company took his mother for everything she was worth.

Jessica pays the DA a visit. According to the precedent that they found, the DA Georgina can testify Mariz Gomez’s testimony since she is dead now. Georgina argues that Maria Gomez was not a credible witness, but Jessica won’t hear it. Jessica and Rachel head to meet with the judge and with their new evidence, he agrees to reopen the case.

Harvey heads back to the office, he tells Donna to start the paperwork for Gallo’s parole hearing. Donna argues that Gallo isn’t a good guy and since Mike is getting out, they don’t need to help him any more. Harvey reveals that Mike is going to be in there a few days, and they need to stay on Gallo’s good side. Harvey meets with Jack and warns him that Gallo is up for parole. Jack is furious, he’s disgusted that Harvey is helping a psychopath get free, he says that he is going to the Parole meeting and he is going to play the recording they have that proves that Gallo is murderer.

Mike is furious with Cahill, he decides that since Cahill is taking Kevin and his wife’s money and not keeping up his end of the deal – then he is going to find a way to get Kevin out of prison too. He talks to Kevin and realizes that Cahill screwed up, he went out of his jurisdiction when Kevin was arrested, he had no business even touching his case. Mike meets with Cahill and threatens to go public with what he just figured out, it could cost Cahill the entire case. Cahill shouts at Mike that he is taking his deal back and Mike can sit in prison and rot too. Meanwhile, Harvey heads to

Meanwhile, Harvey heads to Gallo’s hearing and his former co-worker Cameron Dennis shows up as promised to sabotage the hearing. He tells the parole board that Gallo has not changed and the only reason Harvey is helping him is because Gallo is blackmailing Harvey. Harvey argues that it’s not true and still tries to get Gallo cut loose. The Parole Board wants Harvey to swear under oath that Gallo is a changed man, tomorrow.

Afterwards, Harvey heads to the prison. He learns that Mike is going after Cahill for “Abuse Of Power.” Harvey tells him that he is insane, and he just needs to take his deal, and keep his mouth shut until he is out. Mike says that he isn’t going to drop it until Cahill does the right thing and gets Kevin out of jail too. Harvey leads the prison and meets up with Cameron, he tells him about Mike and Gallo, and begs him to drop his allegations in front of the Parole board so that Gallo will get out and Mike will be safe. Cameron won’t hear it, he tells Harvey to do the right thing, and the right thing is NOT putting Gallo out on the streets.

The DA Larry pays Jessica a visit at her office. She wants to cut a deal, Larry offers Leonard Bailey 7 years. Jessica points out that the case is going to make the DA’s office a mockery. And, she’s going to re-open it unless Larry agrees to cut Bailey loose now. Larry points out that if they lose – Bailey will be put to death in 60 days.

The next day, Harvey heads back to the Parole meeting, he is surprised to see Cameron call Mike up on the stand. Mike tells the Parole Board that Gallo has been blackmailing him and HARvey and Gallo even tried to kill him. It doesn’t look like Gallo will be getting parolled, and he is furious. He tells Mike that he will regret it – but Mike scoffs that he is getting out of prison that day an there is nothing that Gallo can do to him.

After court, Harvey confronts Cameron and demands to know wy he put Mike in danger by making him testify. Cameron reveals that Mike called him, he told him all about his deal and Cahill’s abuse of power. And, Cameron pulled some strings and got them both released.

Mike and kevin are thrilled – they head to their cell to pack. A guard arrives and says that it is time for Kevin to be released, but Mike is staying. Harvey freaks out and goes straight to Cahill’s office and demands to know what happened. Cahill says that Mike wanted to stay in prison – and apparently he has some sort of plan.

Like clockwork, as soon as lights are out, Gallo sneaks in to Mike’s cell to kill him. He pulls a knife on Mike, then realizes that Mike set up a hidden camera and was recording everything. The guards rush in and take down Gallo – he won’t be getting out of jail for a very, very long time.
Louis is working late, and Tara shows up. She says that her boyfriend Josh proposed to her, but she said “no,” she couldn’t marry another man when she has feelings lie this for Louis. Harvey arrives at the prison – he offers Gallo a deal, he tells him that they won’t use the video tape to get him sentenced to prison longer if he promises not to come after Mike. The next morning Mike is officially released from prison – Harvey is waiting for him on the other side. Harvey tells Mike that his plan with Gallo worked, and everything is going to be okay.

Harvey arrives at the prison – he offers Gallo a deal, he tells him that they won’t use the video tape to get him sentenced to prison longer if he promises not to come after Mike. The next morning Mike is officially released from prison – Harvey is waiting for him on the other side. Harvey tells Mike that his plan with Gallo worked, and everything is going to be okay.

Then, Rachel climbs out of the car – she and Mike share an emotional reunion.