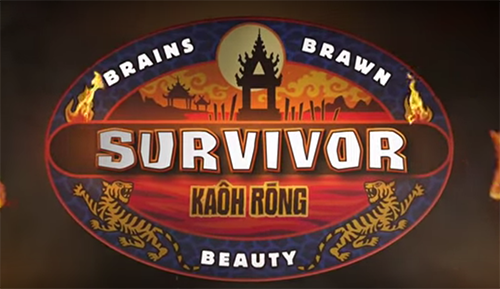 “Survivor: Kaoh Rong – Brains vs. Brawn vs Beauty” will premiere on Wednesday, February 17. The cast for the new season includes former “Big Brother 16” contestant Caleb “Beast Mode” Reynolds, who will be part of the Gondol Tribe – aka Beauty.

This season’s “Survivor” contestants come from every walk of life and span several generations. Glancing over the tribes, it appears that there could be some overlapping on the “Brawn” and “Beauty” tribes. But the “Brains” tribe doesn’t appear to be a bunch of weaklings – they may just give the To Tang (Brawn) and Gondol (Beauty) tribes a serious run for the million dollar prize.

Some of the castaways to highlight include Debbie (Brains) – the chemist – who has also been a bartender, and electronics expert – and between jobs – a waitress at Red Lobster. Oh, and Debbie is a caretaker to none. Then there’s Liz (Brains) who has a degree from MIT and Liz got a perfect score on her SATs! Apparently, Liz is, in her own words, unusually intelligent.

The guy who may have the biggest target on his back, if anyone recognizes him and you know someone will, is Scot Pollard (Brawn). His friends called him “Caveman” – it was Scot’s job for 11 years to push people around in the NBA.

If anyone can take on “Caveman Scot” it’s Cydney the Bodybuilder (Brawn)! According to Cydney, people are intimidated by her muscles. Cydney is a woman who takes care of her body – you won’t find her eating double cheeseburgers all day. Cydney may be begging for one of those double cheeseburgers she abhors after a few days eating rice and…bugs.

Tai (Beauty) is a gardener who loves all living creatures. Tai is definitely unique and he is out to prove to viewers that a 51-year-old gay Asian guy can win “Survivor”!

And then there is Caleb (Beauty) “Beast Mode” from Big Brother 16 who readily admits that he “may not have all the brains.” Caleb says he’s a man’s man – but we think the women may want to steer clear of Caleb Reynolds. Ladies, Beast Mode can be a bit obsessive if he finds you attractive. But this former “BB16” contestant won’t hesitate to vote you out if he thinks you’ve backstabbed him.

Are you ready for the new season of “Survivor”? Do you already have a favorite castaway? Set your DVRs so you can watch the two-hour premiere over again!

Let us know what you think in the comments section below and come back to CDL for “Survivor: Kaoh Rong – Brains vs. Brawn vs. Beauty” spoilers and news.

The 18 castaways appear to be one of the most diverse “Survivor” casts to date. Here is the list of the 18 contestants – and a short bio – who will compete for $1 million in the jungles of Kaoh Rong.