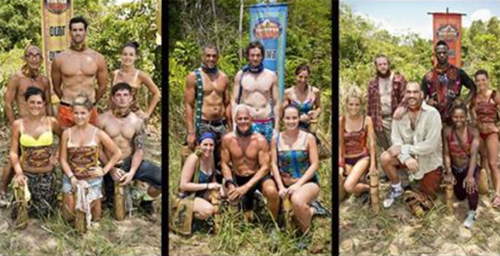 Tonight on CBS their Emmy Award-winning series Survivor Kaoh Rong airs with all new back to back Wednesday February 17, season 32 premiere called, “I’m a Mental Giant,” and we have your weekly recap below!  Tonight, eighteen castaways arrive on the island of Kaôh Rong in Cambodia and are divided into three tribes according to brains, brawn and beauty. Later, one player deals with excruciating pain when a bug gets stuck in their ear.

On the last episode, six castaways competed for a spot in the top three; Spencer Bledsoe, Jeremy Collins, Latasha “Tasha” Fox, Kimmi Kappenberg, Keith Nale and Kelley Wentworth,  Additionally, a ‘Survivor” first occurred during a shocking tribal council; the three finalists battle it out for the prize of $1 million. Did you watch the last episode? If you missed it we have a full and detailed recap, right here for you.

On tonight’s episode as per the CBS synopsis, “castaways embark on the most grueling 39 days in Survivor history and test whether brute strength, looks or smarts will be the attribute that helps capture the title of Sole Survivor. Also, one castaway deals with excruciating pain when a bug gets stuck in their ear, on SURVIVOR, when the Emmy Award-winning series returns for its 32nd season with a special 90-minute premiere.”

Tonight’s season 32 premiere looks like they are going to be great and you won’t want to miss them, so be sure to tune in for our live coverage of CBS’s Survivor Cambodia episodes at 8:00 PM EST! While you wait for our recap hit the comments and let us know how excited you are about season 32.

The contestants have already been divided into three tribes based on the qualities they most rely on in their daily life. The “Brain” tribe, the “Brawn” tribe and the “Beauty” tribe, they are ready to battle 39 days for a million dollars. They arrive on a boat and are given two minutes to salvage anything they can take. They don’t know each other’s names, don’t know if they like them, but they have to rely on each other now. Jeff tells everyone their time is up, they have to jump in the water.

Cydney feels like home on the Brawn tribe. Jason thinks he doesn’t have to prove that he is a bad ass. Everyone reveals their professions and agree they have to begin building a shelter.

Over on the Brains tribe, everyone is getting to know each other. Liz is happy on her tribe and thinks her tribe has an immediate advantage because they can outthink the other tries. Debbie reveals that she does just about everything and can make fire without flint; she says she brings a lot of worldly experience to the tribe. Sadly, she is already getting on some of the tribe mates’ nerves.

Caleb is now wondering why Tai is on their tribe. Tai sees Caleb cutting down a tree and gets a little upset, he loves every living thing, even trees. Tai says he was in the war and came from Vietnam; he thinks it is an advantage because he is already a survivor.

On the Braun tribe, Alecia is staring to get on some of the tribe mate’s nervous because she doesn’t do anything; they have nicknamed her Blondie and the guys say if someone has to go home, it will be her first. Darnell is aligning with Cydney.

On Beauty, the chickens got free and everyone is running around trying to catch them. Tai is watching everyone run around, they get two of them back. Julia aligns with Michelle and Anna, they want to bring Tai in their alliance. Julie remembers Caleb from Big Brother and remembers that he was really loyal, so she is thinking that they should bring him into their alliance as well because he will be loyal to them. Caleb and Tai make their first fire. Caleb says that he is mentally stronger than anyone in this game.

On the Brains tribe, Joe is 71 years old, he says he has street sense and knows how things happen before they do. Joe and Debbie are work horses and are making the camp as comfortable as possible. Neal is already planning on getting rid of Joe and Debbie, he calls them the geriatrics and tries to get Dr. Peter on his side.

It’s Day 2, on the Beauty tribe Tai has started looking for an idol. The rest of the tribe mates see Tai, they know he is looking for an idol, he has to hurry. Anna sees Tai, she knows what he is doing. Tai is ticked off that he was found it and thinks he screwed everything up. Michelle says that Tai is number one for her to vote out if they have to because he is too anxious.

On the Brains tribe, Aubry is not feeling well; Debbie thinks she is just overwhelmed with where she is. Liz thinks it is an anxiety attack and just needs to cool off and calm down.

It’s night time, on the Brawn tribe, Jennifer has a bug in her ear and it is getting deeper and deeper, and very painful. Its morning, Jennifer barely slept all night and there is blood coming out of her ear; she can hear him digging. The rest of the tribe mates are starting to worry about Jennifer but also worry that they may be one less person in the challenge. Amazingly, the bug crawled out of Jennifer’s ear.

It is time for the first challenge. They have to swim out to a boat and once everyone is on board, one person will dive down to retrieve a paddle, once you have all four paddles, you will then race to shore where you will convert your boat into a cart. You will then push it to the top, then you have a decision to make. You can either do a puzzle or test your dexterity by stacking balls while standing on a wobbly beam.

The winners win immunity and a fire making kit. Runner up wins flint and the losers go to tribal council where one person will be going home.

Beauty and Brawn are doing well, Brains are behind from the start. Beauty has all four paddles thanks to Tai and get an early lead. All of a sudden, the Brains tribe is a close second. Brawn tribe is still in the water and are in third place.

Brains tribe is now moved into first place, they are doing the puzzle. Unfortunately Beauty has given up a big lead. All three tribes are doing the puzzle. Brains still in the lead, Aubry doing a good job. That is it, Brain tribe wins immunity and reward, first challenge done. We need one more for second place, it is now a race between the two tribes. The winner for second place is Beauty. Brawn tribe is going to tribal council and one person will be voted out of this game.

At tribal council, Jason says that Blondie and Darnell are the weaker two in the tribe. Darnell says that he admits that they lost the challenge because of him, he can’t make excuses, he is owning it. Blondie says that she is a mental giant and should be kept in the game. Cydney disagrees with Blondie. Blondie says that she is honest, she tried to do the puzzle and is no good at them, so she just won’t do puzzles again. Darnell is just beside himself that he let his team down, the guy is just about in tears. Jason says that it is a difficult decision and wonders if he is going to make the right choice tonight. Time to vote.

It’s a tie, 3 votes Darnell and 3 votes Alecia aka Blondie. Jeff says they are going to re-vote, Darnell and Alecia don’t vote and the rest have to vote for Darnell or Alecia.

Revote – 3 votes for Darnell, he is the first person to be voted out.