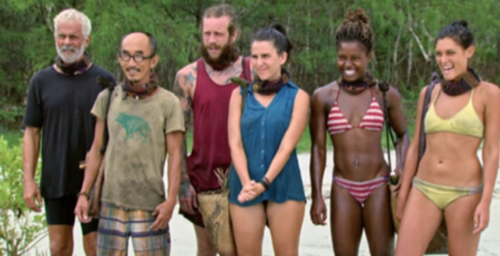 Tonight on CBS their Emmy Award-winning series Survivor Kaoh Rong airs with an all new Wednesday May 4, season 32 episode 12 called, “Now’s the Time to Start Scheming,” and we have your weekly recap below!  Tonight, a combination of balance and teamwork earn some castaways a much-needed reward.

On the last episode, one castaway held the key to individual immunity and guaranteed themselves a shot at the final six. Did you watch the last episode? If you missed it we have a full and detailed recap, right here for you.

On tonight’s episode as per the CBS synopsis, “a combination of balance and teamwork earn some castaways a much-needed reward; and one player comes under fire after bossing other people around.”

Tonight’s season 32 episode 12 looks like they are going to be great and you won’t want to miss them, so be sure to tune in for our live coverage of CBS’s Survivor: Kaoh Rong episodes at 8:00 PM EST! While you wait for our recap hit the comments and let us know how excited you are about season 32.

#Survivor starts with the tribe coming back to camp on night 29. Tai tells Jason he almost played his idol and says he asked Auby. Jason says he can preach when he needs to. Jason talks to Michele and Cydney about how Tai and Aubry will be hard to beat at the end.

Michele doesn’t want to put doubt in her alliance yet and that’s why she voted out her ally Julia. Tai, Joe and Aubry talk about sticking together and tells them about his extra vote that he can use at the next vote and then says he’ll use the idol at the council after that.

Aubry is stunned. Tai says no one can do anything if they stay tight and says Jason and Michele are on the outside. On day 30, Tai shows them a big grub he found and says they might have to eat one in a challenge but says he wouldn’t eat it. He gives it to the chicken who grabs it up.

#MarkTheChicken is happy to have the grub. Jason says everyone loves the chicken and he’s given up hope of eating it. Jason is upset that no one will play with him and he can’t find a way in. Joe comes over to talk to him and tells Joe no one is playing the game anymore.

Joe thinks Jason has no respect for anything that doesn’t go his way. Joe says Jason just likes to bulldozer people. Joe decides to be lazy and eat without helping since he knows they’re targeting him. He hopes that will get them to keep him around because they think he can’t get votes.

It’s time for a water-based #RewardChallenge. They play in teams of three and race through obstacles to a floating maze and they have to move three balls through the maze. The reward is a trip to the Wildlife Alliance rescue sanctuary. They’ll get a picnic and animal encounter.

Aubry hops in the water. They have to walk around the edges of the floating platform to tilt it and move the ball around. The other team has their first ball now too. The blue team gets one ball in and runs to get the second one. Joe, Aubry and Cydney are stuck.

The blue team sinks a second and they go for their third. The yellow time finally sinks one and Aubry runs for the second ball. Jason, Tai and Michele are on their third ball as Joe, Cydney and Aubry scramble to check up. Blue sinks their third and they beat them soundly.

Tai, Michele and Jason win it and they swim in, grab their stuff and head out. Joe, Aubry and Cydney head back to camp with nothing. Tai is excited and says he loves animals but is worried about what might happen at camp while he’s gone.

The others are back at camp and they get a fire going. He’s upset at how bad he performed at the challenge. Cydney is annoyed that Joe keeps making her get up when she just wanted to eat some coconut. Aubry says it’s been a long day.

Aubry thinks Joe wants to burn the damned place down with this super fire they don’t need. Aubry hopes Cydney doesn’t blow up their game. The others are at a hut eating and an elephant walks out. Michele goes to meet it and touches his trunk.

Next they go into a monkey enclosure and one pounces on Jason’s shoulder. Tai says he’s glad Jason is there so his daughter can see this. A monkey hugs him and one climbs up onto Tai then one on Michele. Tai is thinking about voting out Michele who wants Jason out.

Now it’s time for the #ImmunityChallenge and Jeff takes the necklace back from Michele. Hey have to hold a rope that keeps a wobbly table upright. They have to gather blocks that spell out immunity and stack them to show the word without losing control of the table.

Jason and Aubry are close behind and Joe moves for his fourth. Joe is halfway done and still in the lead. Tai almost drops his and recovers. Jason is moving along slowly. Joe loses all of his and has to starts completely over and Michele takes the lead but drops.

Cydney has two blocks to go and now Jason. Cydney now puts up her seventh and has one to go. Jason places his seventh. Jason gets his last block and starts to come back. Cydney is coming back too. They are going slowly. Jason places his and heads back.

Cydney heads back. Whichever gets back wins it. Jason’s stack falls. Cydney is a few feet from it. She gets both feet on the mat and wins immunity. She’s thrilled. Jason is not happy at all. It’s day 32 and they talk about the challenge.

Tai wants to take out Michele instead of Jason. He talks to Aubry, Joe and Cydney about Michele.Joe wants to get Jason out and then Michele comes to the water so they can’t talk anymore.

Michele is certain they’re targeting Jason. Tai plans to use his extra vote against Michele. Tai tells Aubry that Michele is a bigger threat and she agrees. Tai then tells Jason to vote Michele. He says he can’t trust him and wants to vote Joe so isn’t sure what he’ll do.

Cydney talks to Joe and they both want Jason gone and agree Tai has his own agenda. Joe says he’ll do whatever they want. Cydney says Tai can’t intimidate people and she doesn’t like it. Cydney goes and tells Michele that Tai is gunning for her and Aubry is with him.

Michele is surprised and Cydney says she’s trying to get them off her back and go for Jason. Michele knows she’s on a tight time limit and decides to try and do damage control at Tribal. Cydney tells Aubry she doesn’t like Tai dictating to them.

She says she’s been through that before. Aubry thinks that Michele needs to go but Tai didn’t present it democratically. Aubry isn’t sure what she’ll do. Aubry tells Cydney that she thinks Michele is a bigger threat. Cydney asks who she’ll side with. Aubry says she’ll decide at Tribal.

It’s time for #TribalCouncil. The jury comes in – Neal, Nick, Debbie, Scot, and Julia. Jeff says there were so many lead challenges at the immunity challenge. Jason says this has been unpredictable. Jeff asks if she had any sway with the immunity.

Cydney says some people were dictating decisions. Michele says it was Tai who has told them he has the idol and an advantage. Tai says the alliance talked and everyone has a voice and an opinion. Cydney says it seemed like Tai’s way or the highway.

He says he wanted to talk to Cydney alone but he didn’t get to talk to her. Aubry says she thought things got talked through and thought they were all worked out as a group. Michele says they all said who it would be for the alliance.

Tai says there’s a big group then a smaller group. Michele says she’s being excluded and he thinks he’s sitting pretty with two idols. Jason laughs. Tai says they had a different idea and Michele keeps pecking at him. Jeff says this is more than a difference of opinion.

Tai says he would not like it if he was in Michele’s position. She says Tai has turned on every alliance he’s ever had and she’s been loyal. She says if you want to go crazy, go with Tai and he’ll screw you over. Tai says he doesn’t know how Michele got into the alliance.

They bicker and Jason keeps laughing. Tai calls her an extra person. Aubry says she can’t control what Tai says and she has a different style of play. Jason says it excites him with Michele and Tai fighting and says it’s fractures in the concrete.

He says he may go home tonight but knows who will follow him next time. Jeff calls for the vote. Tai votes for Michele. No other votes are shown. Jeff goes to tally the votes but Tai says wait then says he wants to use his advantage.

Jeff asks him to explain and Tai says he gets to add another vote. Jeff agrees that’s what it is and says go cast your second vote. Tai votes for Michele again and says she’s got to go home. Jeff goes to count the votes. He comes back and calls for idols.

Tai doesn’t play his idol. The votes are – Jason, Michele, Michele, Jason, Joe, Jason, Jason. He’s out and Jeff says there’s five left and not enough room in the raft for all of them. Jason says he’s eben watching Survivor 15 years and still loves it and is proud of the way he played.