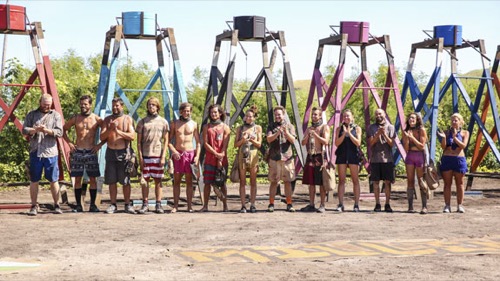 On tonight’s Survivor season 33 episode 8 episode as per the CBS synopsis, “Tonight the 3 teams merge and the Survivor merge brings individual immunity, an advantage, and a thief.  The game intensifies as the castaways fight for protection and food.”

#Survivor starts at Ikabula after Tribal Council when they sent Michaela home on a blindside. Jay says he thought she was going to punch him in the face. He’s proud of himself. Bret and Sunday are happy they were not sent home. Hannah tells them she would have voted with them.

Hannah camera talks later about how they excluded her from a vote and she can’t trust him. She thinks Jay thinks she can’t see past his pretty face. Hannah wants to get back at them for cutting her out of the game play that sent Michaela home.

A boat pulls up to the beach and hands them a message. Jay reads it and it says gather your supplies in five minutes and get on the boat. They shriek and hug. Bret is happy since he was terrified that he was going home.

Over at Takali, they get the same message about packing to leave. Adam is thrilled he made it to the merge but knows alliances are tested when this happens. The two boats near each other and then head for the camp at Vanua.

Zeke happy to make the merge

The boats pull up and Zeke wonders what alliances exist from all these people. Ken hugs David and he’s happy to see him. Michelle is happy to be back with Jay and Taylor. They also unload a big feast for them to share to celebrate the merge.

Jay is happy since he’s got lots of allies plus an idol. He says he’s the kingpin and no one knows. Bret and Chris walk and talk later about alliances. Chris is worried and says he, Zeke and David are a good core group and he wants Bret and Sunday back with hum,

Zeke, Adam and Hannah talk. They swap intel from the three tribes. Hannah tells them how they flipped on her and Michaela at the last tribal and it was Jay that turned on them. Zeke is now worried about Jay being charming and is a major threat.

Zeke says Jay controls Will, Michelle and is working on the other bros. Zeke is worried about a bro-lliance. Adam is off looking for idols. He says there’s usually a merge idol and he knows this camp since he found an idol there before.

Adam finds a note tucked up at the tree mail drop off. It’s an advantage that allows him to steal a reward after it has been won by someone else. Adam says this is a Survivor first since it’s a new power that no one has ever had. It’s a #SurvivorFirst.

Adam read that he has to alert Jeff that he wants the reward after he hands them out. Taylor wakes up and crams a Mason jar full of stuff. Bret sees him grabbing good that belongs to all 13 of them. He doesn’t say anything about it but he noticed.

Adam woke up and saw Taylor sneaking food off. He follows him to try and talk game. Adam tells him he won’t tell anyone and says he knows that he’s upset that Figgy is gone. He tells him that Jay is building an army and Will is his right hand man.

They talk about voting off Will. Adam says if they take out Will, Jay will come back to him. Later, Taylor thinks he’s being stupid and doesn’t want to work with him. Taylor lies and acts like he’s cool. Adam tells him about the advantage he found today.

Target on Taylor the food thief

Taylor camera talks later about blindsiding Adam as fast as possible. The new tribe is Vinaka. It’s dawn the next day. Ken tells Bret he noticed some food was one and Bret tells the other Gen Xers that it was Taylor Chris sees the Millennials are a tight group and they need to send one of them home.

They talk about taking Taylor out. Ken talks to David about how tight the Millennials are. Jess and Zeke talk too and they all set Taylor as a target. Jay and Taylor talk and Taylor asks about Will. Jay wants to target Gen Xers.

Taylor tells him he has a secret and says Adam wants Will out. Jay asks why and he says Adam thinks Will is his right-hand man. Taylor thinks they should target Adam. Zeke is nearby and overheard what they were saying.

Zeke camera talks and says if Adam goes home, it messes up his plans. Taylor tells Will about Adam targeting him and the paranoia spreads like wildfire. Jeff welcomes the merged tribe as they head into the arena to fight for individual immunity.

Jeff takes back the wooden idols and shows off the immunity necklace. They have to balance on a narrow perch and their hands are tethered to a bar and when their arms lower, they are out. Jeff says this event has been updated to two arms to make it harder.

Sunday is out first just a few minutes into it. Chris is out next followed by Bret. After 10 minutes, Hannah’s hands and legs are shaking. Jay goes out next. Zeke goes next. That leaves eight Survivors still in it. Ken dumps his next. Hannah follows shortly after.

Taylor, Adam, David, Jessica, Michelle and Will are left in it. 20 minutes in. Michelle is out. Taylor goes out followed by David. Adam is out and that leaves Jessica and Will. It’s one Gen X and one Millennial. They hit the one hour mark.

It’s now one hour and 30 minutes. Jessica starts to struggle with her legs and Will’s arms are bothering him. Will almost loses it but recovers and Jessica loses her grip. The Survivor high schooler is the first to win individual immunity in Season 33.

Adam tells Will he did a great job and Will gets congratulations all around. Adam has to find a new target now that Will is safe. Will also know he was a target and now wants to send Adam out. Jay and Will tell Michelle and Hannah they should take out Adam.

The girls aren’t sure but Will is insistent. Michelle thinks this is a personal move, not strategic. Zeke tells Adam that Taylor told Jay that he wanted Will out. Jessica is there and hears. Adam says that’s why Will played so hard at immunity.

Zeke proposes they take out Taylor instead. Adam is good with it. Adam goes to Chris and Ken and says he’ll vote who they want. David says there may be an idol. Zeke says Jay has an idol but David wonders if Jay might give it to Taylor.

Chris talks about targeting Michelle since she has no idol but Ken wants Taylor out. Adam talks to Taylor who talks nice to him but thinks that it is too late. Taylor says to the camera that it’s 100% about revenge tonight. David and Hannah watch the groups talking.

David is the king of paranoia. Hannah tells Adam that he needs to stop freaking out and talking to people that he shouldn’t, he will go home. Hannah tells Zeke that Adam is not trustworthy and he wants to sit at the cool kids table.

Jay and Taylor are focused on Adam. Adam wonders if he should play his immunity idol. It’s time for #TribalCouncil. David says the Millennials eat a lot more and says the feast food is way gone. Bret says Taylor took the food. Taylor laughs.

Taylor says he wasn’t stealing it. Jeff tells Taylor that everyone is hungry. Chris says when you do that, it’s selfishness and not game play. Taylor tries to defend it and says his stomach was messed up. Zeke mocks it and says they all have stomach issues there.

Zeke says that could cost you a million dollars. Jeff says Taylor doesn’t seem the least bit concerned. Adam says there are some loyalties from the first 12 days but then they worked with the Gen Xers for a long time too.

Will says there is a clear objective in everyone’s mind and Chris says there will be some lines drawn in the sand tonight. Michelle says she sees that too and trust will be broken with some and strengthened with others.

Taylor says worry doesn’t do any good and you can’t change your fate. Adam says Taylor looked right at him when he said that. Adam says he’s very nervous and heard his name and it’s terrifying. Jeff calls for the vote.

We see Taylor vote for Adam and says “this one’s for Figs.” No other votes are shown. Jeff goes to tally the votes then comes back and calls for an immunity idol. Adam looks around and then decides not to play it.

Michelle says they didn’t trust the group of them and she thought she could trust what people said she went overboard with her relaxing.