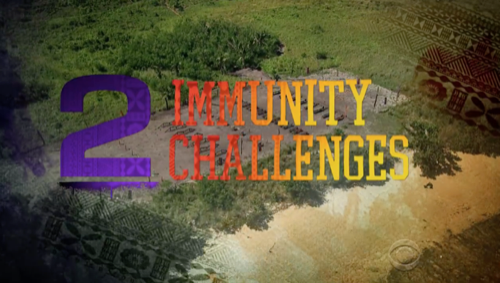 On tonight’s Survivor season 33 episode 13 episode as per the CBS synopsis, “Two tribal councils are held and two castaways are sent to the jury. Immunity is on the line in a classic game of “Survivor” pinball.”

#Survivor starts on night 33 after Tribal Council. Others tell Will he made a great move. Will says he feels like he left Tribal as the man. He says everyone needs him and he can flip flop back and forth all the way to the end.

Bret talks to Sunday about the big move and asks why Zeke instead of David. Bret says this kid is thinking like a high schooler. Bret tells Sunday they’re all insane. Next day, Bret tells Adam that Jay, David and Will need to go out next.

Adam is ready to work with them so he, Hanna and Ken can go with them forward, it works. Adam shakes with them on it. Later that day, it’s time for an immunity challenge. The eight survivors head into the giant course looking worried.

Jeff takes the immunity necklace from Adam and explains today is a race to disk and you stack them on a pole and then take them through a maze then roll them through a target. They take their places and start. They have to go across an up and down balance beam while balancing.

David and Bret make it past and run back for more. Ken and Jay make it through and so does Adam. The girls are going slow and Will has to restart. David is in the lead. Now there’s phase two and you have to use a staff and work them through a wire maze.

Will is stuck in phase one. Bret makes it through with four. Jay brings six and David delivers six. Sunday and Hannah fall back and Will is hopeless. David and Jay are both back and now it’s target shooting. Jay has four and David has two. Jay wins it by a huge margin.

Jeff gives Jay his immunity necklace and says someone goes home and becomes the sixth jury member. Jay is happy and says he doesn’t have to talk to these fools plus he also still has a hidden immunity idol. Back at camp, Jay gets congratulations all around.

Ken says Jay has won three of the last four challenges. He’s not sure who they will target. Jay and Will talk and Jay says David can’t win any challenges and Ken can. They talk about taking David out before Ken. Will agrees to this plan.

Will then goes to Hannah and Sunday to vote for David. Will thinks if David goes to end, he’ll beat them all. Bret agrees too. Will thinks he’s calling the shots. David notices the conversations and says he feels so insecure. He talks to Ken.

Ken is worried also. David thinks Will will try another big move tonight and is coming for him. Jay and Will talk to Adam who also agrees to vote for David. Adam later says Will thinks he has power and is more dangerous and is a bigger threat.

Adam talks to Bret and says he’s voting against Will. Sunday and Bret decide to vote with Adam against Will. Adam then goes back to Hannah and she asks if this is the right move since he just saved their butts. Hannah is torn since she owes David.

Adam says they may have to target David next. Adam thinks he and Hannah have the power to decide who goes home next. Adam thinks Bret and Sunday will do what he wants. They head off to Tribal Council with the target on David and Will.

The survivors come in and then the jury – Michele, Taylor, Chris, Jessica, and Zeke. Jeff talks about Will’s big move to take out Zeke. He says it caused stir since Adam played an idol he didn’t have to. Jay says he was proud as a fan but it sucked for him.

David says he has concerns that they’re voting him tonight. Jay says if they trust in Will, he should stick with his last alliance. Hannah says almost everyone up here has worked with and against each other and they need to take out threats left in the game.

Adam says you have to think about how you get to the end and who you want to stick next to. Jeff says a big move means you’re a bigger target. Jeff says you need a resume. David says it’s complicated and you don’t want to be a goat and not win at the end.

Jeff calls for the vote

Rain starts falling and Jeff asks Jay who’s going home. Jay says he has no idea and says it could be an easy vote or another big move. Jeff calls for the vote. Taylor whispers that’s as dry as they’re going to be tonight when it starts pouring.

The jury is going back to Ponderosa where it’s nice and warm. The voting goes off. Jeff goes to count then comes back and calls for any immunity idols. The votes are: David, David, Will, Will, Will, Will, Will. Jay fist bumps Will when they realize it’s done and he’s gone. Will says good luck and goes.

Jeff says the game is being played at a high level and you may want to hide but this season you must be seen. They grab torches and head back to camp. Will says he’s the youngest to ever play and this was the most amazing experience in his life.

After Tribal, Jay says he’s the black plague and anytime someone makes a plan with him, he goes home. He says he’s all alone and has no alliance. He says every Tribal has been chaotic. He says he plans to play hard.

Jay goes to talk to Adam and he says it’s crazy and says they have a sick relationship. He says it’s #yinyang and they love and hate each other. Jay tells Adam he can’t beat David at the end and Adam says he’s not planning on taking him.

Adam tells him that his next target is David. Adam says he knows Jay has an immunity idol. He says if he doesn’t have immunity, they need to take a shot at him.

They have to solve a block puzzle while a ball bounces through a pinball timer. You can catch it and restart your timer. If you don’t catch it, you have to wait while it rolls down the pinball side before you can start working again on the puzzle.

The seven draw for spots and start. Jay’s ball drops and he’s stuck in a time penalty and David gets one too. Bret and Sunday get penalties and then Hannah does too. Adam misses too and so does Ken. None have mastered the timing.

Adam says this is so hard. David is making progress. Jay drops again. Ken is making progress too. Ken is wrong – he misspelled Millennials. David’s ball drops. Adam coaches Ken on when to catch his ball – he’s helping him. Ken wins immunity.

Ken gets the immunity necklace and he says you can’t spell when you haven’t eaten in 35 days. That puts Ken into the final six and tonight it’s another Tribal Council and someone else heading to the jury. Ken wants to target Jay.

Back at camp, Ken gets congrats and fist bumps. Adam was worried David or Jay would win so he’s happy it’s Ken if not him. Jay says Adam helped Ken and Adam says he didn’t want David to win it. Jay asks the others to please vote David out before him.

David tells Ken they should send Bret home. Hannah comes up and says Adam should vote with them and they should split votes between Bret and Jay to flush Jay’s idol. Hannah suggests targeting Sunday since she’s a good goat to take to the end. Ken and David agree.

Hannah is worried someone who didn’t work hard like Sunday will get a spot at the end. Adam talks to Ken and Hannah about wanting Jay to go home. Hannah says he will play his idol. Adam says they need rid of his idol.

Adam talks to Bret who wants David to go home. Adam wants to try and send Jay out without playing his idol. Adam tells Jay that he has to play his idol. Jay tells him he hates him. Jay thinks Adam is lying and he might not play it.

Adam tells him about his mom’s cancer. Jay covers his face because he’s crying too. Adam tells him he’s really scared. Jay says his mom has brain aneurysms and they’re both out their playing for their moms. Jay has totally changes his mind about Adam.

Hannah tells Adam she wants to vote for Sunday. She says they can saved David and have a more loyal four. Adam says either David or Jay need to go home tonight. She’s concerned that she’s lose her ally David if they send him home.

Hannah isn’t sure what she wants to do. It’s time for Tribal and the jury comes in – Michele, Taylor, Chris, Jessica, Zeke and Will. Jeff asks David about friendship vs everyone for themselves. David says you need friends.

Jay says you do need bonds and alliances but none of his allies are there anymore. He says he’s not a threat since he’s alone. Bret says Jay wishes he had the necklace. David says he’s not sure if he’ll survive the night and has relied a lot on friendships.

Adam says David has impressed people with his transformation and the jury would root to him. Hannah says there has been a lot of talk about who’s a threat to win at the end. Sunday says she’s not a physical threat and they might take her to the end.

She says she thinks she can get votes but others think she can’t so she’s underestimated. Adam says everyone has been playing their own game but the jury perception matters. Jeff calls for the vote. They go vote and then Jeff counts and does the idol call.

Jay caves in and plays his idol with a groan and says he’d rather be safe than sorry. He says they get to play with him some more and hands it over. Jeff says votes for Jay don’t count. The votes are: Jay, David, David, Sunday, Sunday, Sunday, Sunday.

Jay regrets playing the idol now. It’s another #blindside. She tells them good luck and have fun and takes off. She says “dang it” as she goes. Jeff says there are three Millennials and three Gen X left as they begin the battle to the finish.

Sunday says she hates to leave this close to the end she could see the finish line. She says her family will be proud of her and leaves feeling so proud of herself and has zero regrets about it.