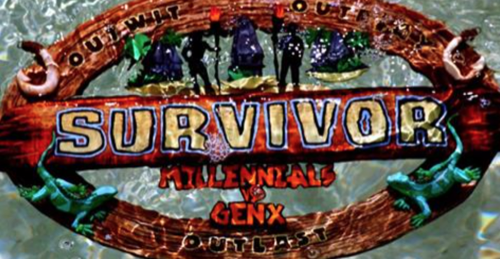 On tonight’s Survivor season 33 premiere episode as per the CBS synopsis, “One castaway dons his “love goggles” when he’s struck by another’s beauty. Also, heat exhaustion takes the air out of one castaway.”

Tonight’s episode of Survivor kicks off at Gen-X Camp. It’s Day 5 and they still do not have fire. Paul is feeling optimistic though because he has started a 6 person alliance, Paul scoffs that Cece and David don’t stand a chance.

David knows that his time on Survivor is limited – he knows that he has to win over the members of his tribe, so he decides to help them build a fire. Ironically, David manages to get a flame going. David knows that he still isn’t safe though, so he heads in to the woods and searches for the Immunity Iold – he miraculously finds it.

Meanwhile at the Millennial Camp, their fire is going strong and romance is in the air. Michaela catches Taylor and Figgy making out in the middle of the night. Zeke and other members of the tribe think it is a horrible idea – and now they have a target on the back. Power couples never make it on Survivor. Jay takes Taylor aside and tries to warn him that Survivor is not the place to be coupling up.

Back at Gen-X, Ken is having a tough time socializing with the other members of the tribe. Ken is earning his keep though, he heads out to sea and spears an octopus for dinner. David takes Ken aside, they decide that they need to work together to break up Paul’s alliance. David decides that he can trust Ken – so he shows him the Immunity Idol that he found.
Figgy is making enemies at the Millennial Camp, she and Michaela have a little cat fight and Michaela mocks her hooking up with Taylor.

It’s Day 6 at Gen-X Camp and Paul is starting to make enemies. IT turns out that everyone is starting to grow tired of Paul barking out orders and running things. Ken takes Cece aside and tells her about his and David’s plan to take Paul out.

It looks like they might not have to take Paul out of the game though – someone finds him lying down at camp and his hands are shaking and he is having trouble breathing. The producers and medics rush in, Paul is complaining of cramps in his chest. Everyone stands around Paul and waits to hear what the medics have to say, they announce that he did not have a heart attack – just extreme heat exhaustion and dehydration. They say that Paul can stay in the game and he doesn’t have to leave the island.

It’s time for the Immunity Challenge. Gen-X and the Millennials meet on docks in the middle of the ocean. Each member of each tribe must go through an obstacle course which involves a lot of swimming, and some underwater driving. The tricky part is they have to dive off a cargo net and grab a key that is hanging in the air. The race is on – and so far both tribes are neck and neck, Paul is flying through the course, which is odd considering he thought he was having a heart attack yesterday.

David is struggling through the course and basically costs Gen-X the race. The obstacle course isn’t over though – they must each toss rings onto floating poles, which proves very difficult for the Millennials. Gen-X is crowned the winners, the Millennials are going to Tribal Council.

The Millennials head back to camp, everyone begins whispering about their votes – it looks like they all want to vote out Figgy. When Jay and Michelle gets word of it, they start scrambling to try and keep their alliance member in the game. Jay tries to turn the attention on to Zeke, Michelle tries to get Will’s vote, but he doesn’t seem to interested in keeping Figgy.

Later that night, the Millennials head to Tribal Council and it is time to vote. Afterr chatting with Jeff, the tribe members submit their votes one at a time anonymously. When everyone is done, Jeff tallies the votes. Mari receives 6 votes, which is quite a bit compared to Figgy’s 3 votes. Mari is officially eliminated from Survivor.