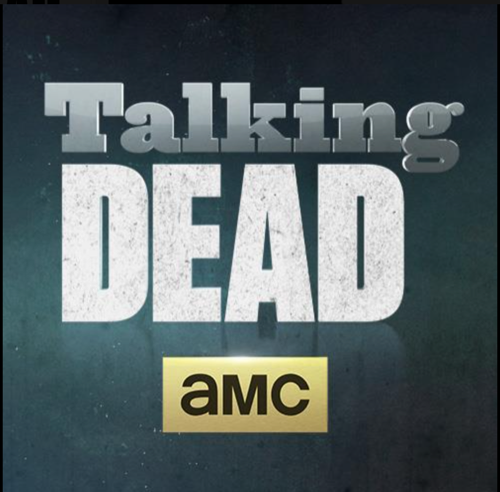 Did you watch last week’s episode of The Walking dead where Chris Hardwick was joined by actor Lou Diamond Phillips, Comedian Ron Funches and TWD executive producer Dave Alpert?  If you missed the episode we have a full and detailed Talking Dead recap, right here for you!

On tonight’s Talking Dead as per the AMC synopsis, “Chris Hardwick will be joined by Tom Payne who plays Jesus on TWD, Xander Berkeley who portrays Gregory the leader of the Hilltop Community and actor, comedian, public speaker, comic book writer, author, and podcaster Kevin Smith.

#TalkingDead tonight has the actors that play Jesus (Tom Payne) and Gregory (Xander Berkeley) plus superfan Kevin Smith. Tom has his hair in a man bun. Kevin says they should call him sweet Jesus. Fans talk about it being a sin to feel that way about a guy named Jesus.

Tom talks about Sasha and Maggie showing up with the bodies and says Jesus thought they had taken care of the Saviors and then it’s a shock to find out it didn’t work. Chris asks Tom about Jesus and Gregory. Tom says Jesus is a loner and doesn’t like to stick around.

Xander says Gregory probably ran a car dealership. He says he thinks Gregory is so into himself he doesn’t bother to learn people’s names. Kevin says you want to relate to a heroic character and we all want to be like Jesus and he sees himself as more of a Gregory kneeling quickly.

Kevin says he would fellate himself out of the zombie apocalypse. Chris laughs about fellating zombies. Kevin says they would call it the Walking Head and Chris jokes about his show being the Talking Head. Now the In Memoriam.

The walker where Carl Drives Like His Mom. Then jam walkers, then the ones Sasha and Jesus killed including the King Fu kills, the tractor kill walkers, the loud Gremlin playing music. The summary says Maggie is taking over and crushing it.

Sonequa Martin-Green does an interview about Gregory trying to sell out Sasha and Maggie. She says Maggie was right saying cowards are more dangerous and he’s a bomb waiting to go off. She says you can’t leave it unattended so he’s a problem.

Tom says Sonequa was really sick when they shot the walker scene. He says she was vomiting every 30 minutes and was trying to keep it down. He says there was a bucket and she’d run vomit. Tom says that’s what they should have been shooting – how hard she worked.

The crowd gives a big hang to her. Xander says she hugged me. Kevin says how would you know that on the set since you’d be vomiting from all the stuff you have to see at work. Kevin asks Tom if the beard is real and he says it was fake but he grew it in and the hair too.

Kevin asks how he keeps his hair so beautiful in the post-apocalypse word. Tom says Jesus doesn’t get too dirty if he doesn’t have to. Tom says when people approach him and say he looks like Jesus he’s not sure if they mean the character or son of God.

Tom says it’s great for Sasha to call Jesus out about not stepping up to lead. He says Jesus isn’t a coward but can’t sort out leading Hilltop on his own. Chris gives a shout out to Steven Ogg who plays Simon. Kevin says Simon just died on Westworld and says he’s like vice-Negan.

Xander says he and Steven have a bromance they call SandOgg and says it’s so much fun working with him. Kevin says they had a long scene and held everyone’s attention. Xander says he and Simon rehearsed a lot together before they shot it.

He says Scott Gimple was so excited writing the scene because he’s such a pop culture junkie.

#1 Jesus tells Sasha that Abraham said things that made him – grin and gasp, laugh and cry, or smile and wince. The last one is correct.

#3 Carl crashes the car into two red posts that read – drive and slowly, stop and ahead, look and out. Drive and slowly is correct.

Lauren and a poll

Lauren Cohan does a little interview. She says Maggie wants revenge but more so wants her child to be safe. She says she likes Sasha staying at her side. She says Gregory is trying to destabilize them but that doesn’t matter and Maggie will have Hilltop and he won’t if he keeps on.

Chris reads tweets about Maggie saying the baby is alive and calling her a queen and how Maggie is a born leader. Chris says Maggie is so strong and asks if Gregory is threatened by her. Xander says he doesn’t react well to physical abuse and it shocked him when she hit him.

He says Gregory was relieved when she looked at the watch and was diverted from hitting him. Xander says kneeling is no big deal. Tom says Jesus isn’t surprised that Gregory tried to betray them and that’s why he hid them elsewhere and says he was very disappointed with Gregory.

Kevin floats a fan theory that Gregory and Jesus might be related. He thinks they could be father and son since they’re both blue eyed. The crowd gasps. Chris says Jesus must have inherited his mother’s tweets. Poll question – should Maggie be the new leader of Hilltop? Yes gets 96%.

Chris’s mom is there

Xander says he has a dog in this race and laughs. A caller asks Tom would Jesus have kneeled if Simon asked him to. Tom says he would have but it would have pushed him harder towards Maggie and Sasha staying and Maggie being the leader.

Chris points out that his mom is in the second row and comes to all the tapings. Kevin says that’s cuter than two kids skating through the apocalypse. Now some behind the scenes info. Chandler Riggs (Carl) and Katelyn Nacon (Enid) both already knew how to skate.

The tractor killing walkers scene was made with blue Styrofoam wheels rolling over them to simulate it. Enid is the seventh person to have the watch. Hershel, Glenn, Termite Alex, Rick, Sasha, Maggie, Gregory and then Enid.

Tom talks about his fight training between seasons and says it was big for the comic character so he worked on it hard. He says he worked with the same guy that trained Lenny James for his stick fighting. Chris says everyone calls him flying Jesus and other positive comments.

Jesus learns to be a ninja

Tom sent some footage of him training and Chris says he put 80s montage music to it. Tom laughs at the blip they play. It’s hilarious. Tom gives it two thumbs up and laughs. Kevin says it was impressive and Chris says his hair was flying.

Chris asks why doesn’t Gregory fight and Xander says he’s a high-value asset so he can’t risk fighting. Then a poll about what will happen to Carl next – he’ll kill Negan, chicken out, or he’ll be killed. Kevin says Patch Adams won’t go anywhere and says he thinks Negan will toy with him.

65% say Carl will chicken out. Tom says Jesus isn’t judgmental and won’t tell Carl he shouldn’t have done this by hiding in the truck. Kevin says old Jesus was pretty judgmental. A tweet mentions they hope Carl’s breath was fresh before he kissed Enid.

Kevin says he liked them skating and kissing. He says it was ridiculous that Carl walked away from the girl that wanted him. He says he liked Carl and Jesus in the truck. He says the couple skate made him sad because it took him back to the days of couple skate when no one skated with him.

Chris talks about breaking his wrist when he’s on a skating date at age 16 and never skated again. His mom laughs. A caller asks Xander how did he prepare for the role knowing Gregory from the comics. Xander says he’s done a lot of animation voice work and loves channeling a drawing.

He says he likes finding the voice for cartoons and this was great and says he worked a lot with Scott to find the voice. Xander talks about how Gregory poses and postures and gestures. He talks about giving them the panel from the comics of Gregory’s stabbing.

Poll question- best teen date in the apocalypse? Hilltop bonfire, roller skating, or a nice drive. Most say roller skating. Now a sneak peek at next week. We see a young girl stabbing a wet walker in the head and another woman is with her. They are on the coast.

The girl spots another by the shore and goes to stab it but then the woman runs up and says stop. She’s alive. It’s Tara. The young woman says, she’s not a bobber, she’s alive. How did Tara end up at the ocean? Kevin says we might see zombie sharks soon and Chris laughs.