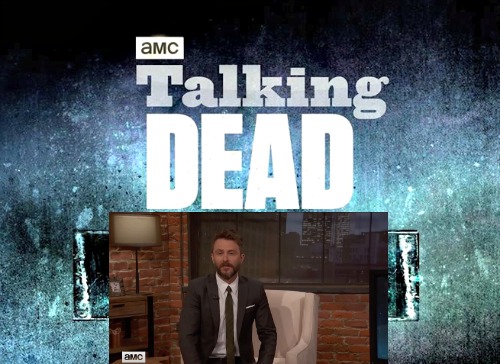 Tonight on AMC Talking Dead returns with an all new Sunday May 22, season 2 Spring Finale and we have your weekly recap below. On tonight’s episode, guests talk about “Shiva” episode of “Fear The Walking Dead” is discussed.

On the last episode Talking Dead host Chris Hardwick sat down with Mercedes Mason (Ofelia Salazar), comedian Jim Gaffigan and actress Tamera Mowry-Housley who discussed the episode “Sicut Cervus” from Fear the Walking Dead. Did you watch the last episode? If you missed it we have a full and detailed recap, right here for you.

#TalkingDead starts and it’s all about the mid-season finale. Tonight on the couch is Cliff Curtis (Travis), Gale Anne Hurd, Marlene Forte (Celia) and Ruben Blades (Daniel). Chris asks Gale if Daniel is really dead and she says in their minds, he’s not gone and says they didn’t see his body.

Marlene says she’s not a fan of zombies but her 78-year-old dad loves the show and says he freaked out and was so happy. She says her dad isn’t crazy about Celia. She says she binged all seven season of The Walking Dead while on set down in Mexico and that helped her.

She says she got hooked and now understands. Chris says sorry you got eaten. Cliff says he agrees with Mercedes Mason that Daniel is badass and would want him at his side. He says a lot of the characters struggle with the mortality of things but Daniel is very clear.

Now the In Memoriam – we see the sitting by the fence infected, fall down go boom infected, Jorge the guard, Celia, wine cellar infected, the ghosts of Daniel’s past. But they do NOT list Daniel among the dead.

We see on set down in Mexico for the Abigail estate shoot and they talk about studying the culture and the local relationship with death so that it touches on their beliefs. We see a comment about Nick opening up to this belief system.

A caller asks Ruben what it was like shooting the scene where Ofelia peels her face off. Ruben says they had to do it right because of the makeup and says the pressure was all on her since it took hours to put the makeup on and he had to remember to be horrified.

Chris asks Gale about the characters all going bananas – Nick, Madison, Strand, Chris, Travis. Gale says it’s the time when they thought they could pull it off and found a safe harbor. She says the boat wasn’t safe and now this and all the bonds are shattered.

She says it’s blood or bond this season and all have broken. Cliff says the Abigail house seemed miraculous but Travis was doubtful. He says Travis didn’t like the agreement Madison made with Strand. He says Travis doesn’t trust Strand right or wrong.

Chris says Strand does have his own MO. Chris asks Marlene why Celia hated Strand so much. Marlene says he was a player from day one. She says Celia was taking care of Thomas like her own and didn’t mind him having young men around but she knew Strand was trouble.

Marlene says Celia just has mother instincts about Thomas and she sees through Strand. Chris asks Gale of Ofelia will get stronger. Gale says Ofelia has felt for a while that she needed to take care of her parents and says she will feel pain and loss with both her parents gone but it’s an opportunity.

#1 How many people did Daniel tell Griselda he killed – a dozen, too many or just enough? The answer is too many.

#2 Celia tells Nick, “This is not an apocalypse, it’s ___” – our beginning, our new hope, or our second chance? The answer is our beginning.

#3 What does Nick use to tie up infected Luis – ropes, his jacket or barbed wire? The answer is his jacket.

Frank Dillane (Nick) talks about Travis asking Nick to lie and says he didn’t find him and says Cliff talked to him about what would do as a human since his son Chris is not well and that helped Frank think througnh how he would react.

Chris asks Marlene about Chris trying to cut his dad with a knife. She says Travis needs to toughen up and give him the back of his hand. She says boom, what are you doing that for? Then a poll, should Travis have gone with Chris or stayed with Madison.

Cliff says Madison chose to be on Alicia’s side and say Chris was Travis’ problem. Cliff says no one but Travis could help him. 83% say he should have stayed with Chris. A fan tweeted that she was happy Travis chose Chris over Madison and her brats.

Chris asks Gale if Chris is a Dexter in training. She says in the civilized world, structure kept him in line and says he was not a sociopath but has now crossed a line and doesn’t understand right and wrong and when he’s rejected by Madison and Alicia, it pushes him to the dark side.

Ruben says Travis did the right thing to stay with Chris and says Chris just can’t cope and has all this anger. He says it’s the making of how Chris might turn into a villain and you don’t always see the process. He says he was stunned when Chris tried to stab his dead.

Chris asks Cliff about the knife scene and Cliff says it was fun because Lorenzo does martial arts and they hit each other pretty hard. He says he enjoyed choking him out and says he handled it well and is a tough kid and they enjoyed it.

Ruben says they did a scene that didn’t show where Chris wandered off and then he slapped him after they got back from the beach. He says Lorenzo told him, slap me really hard. He says he told him okay and he slapped him solid.

Now some inside info on the episode. We see that a winery was used as the Abigail compound and they had to use special lights to preserve the wine. Mercedes Mason was freaked out when she read the skin peeling script because she didn’t know at first it was a dream sequence.

Kim Dickens (Madison) talks about the scene with Nick and his mom about his preoccupation with the dead being like his heroin addiction and says she doesn’t know how she’ll reconcile losing him since it’s so painful for her to lose him like that.

Chris asks Gale about Nick walking away. She says it’s hard to break out of being the black sheep of the family because your family expects the worst even when you’ve changed. She says Nick doesn’t think the family is making moral decisions.

She says when you’re a druggie and you lived in that environment, it’s not so strange. Chris then asks Marlene about Celia’s spiritual connection to the dead. She says Celia sees it as a next step and you’re not dead until someone kills you for good.

She says Nick is the black sheep and so was Thomas so when he walked in, she recognized him and says it’s a failure on Madison’s part to not see Nick for who he is. Ruben says the dead don’t judge Nick so that makes him feel more comfortable.

Now a poll – what do you think of Madison after tonight’s episode – is she mama bear or murder bear – for locking Celia in with the zombies? Ruben says Madison is cold when she needs to be and Chris says she has something dark in her past. 86% says mama bear.

Chris reads a comment from Colman Domingo (Strand) that Marlene terrifies him. Someone else calls it a smooth kill what Madison did to Celia. Cliff says Travis would never have done that. Marlene says Celia isn’t afraid of the dead and says Madison made a smart choice.

Cliff says Madison told Strand not to come between me and my kids. Ruben says Madison and Daniel have a connection because they know they can count on each other to do anything that needs to be done no matter what.

A fan comes up and asks Ruben about the dark material and if anything makes him laugh. Ruben says when Colman was on the boat and then pretended to be on the stairs but they didn’t go anywhere and it was funny (had to be there I guess).

Chris puts the fan into a cage on the set and then some people dressed as walkers come at her. She giggles. Chris says everyone who comes on the show gets something. She cowers and Chris says they were there first so they get her.

We see some more behind the scenes of Ruben tied up and Celia with him. Then we see some of Griselda, the wife, back to haunt Daniel. They talk about Daniel wanting to get rid of all the evil in the house and that includes himself when he lit the fire.

Chris asks why Daniel is seeing Griselda and Ruben says he needed closure. He says when Daniel lost her, he feels a hole since he couldn’t rescue her and it needs resolved. Marlene says Celia is the owl and has eyes in the back of her head and that’s why she pushed his buttons.

Chris asks Cliff how Travis will do without the group and just with Chris. Cliff says Travis has a lot of obligations in the middle of an apocalypse being a good dad and husband and he wants to see how he’ll transform free of some of those obligations.

Ruben says Travis is the moral center of the group and he doesn’t want to lose his humanity and says he finds it touching. He says Travis is always trying to believe and it’s a tough job. Chris says taking the high road sucks sometimes.

Ruben talks about how much he likes comic books and says he didn’t watch The Walking Dead TV show but read all the comics then when he went back to watch it, it didn’t correspond and says Carl had two eyes and he was like what…

Now a poll – what is the craziest thing that could happen next on FTWD  – #Strandison romance, pirates on water skis or finding a submarine? 67% vote for Strandison. Now we see a sneak of the mid-season premiere of Fear on Sunday August 21.

We see a man with a bat walking up to Nick who lies asleep on the floor. He stands above Nick who opens his eyes in shocks. Then Chris asks Gale if that was a Negan cameo since he’s got a bat. Gale says the families are split and people are headed different ways.

She says the danger will be amplified and now they must fear the infected and now maybe fear each other. Chris reads a fan question for Ruben and asks since Daniel is a barber, why did he never fix Nick’s hair. Ruben says Daniel was a barber, not a magician.