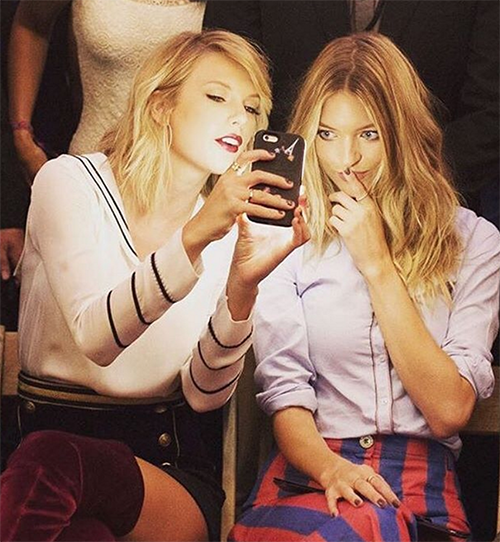 Taylor Swift is apparently having a hard time picking up the pieces of her disastrous personal life following her very nasty and public splits with ex-boyfriends Calvin Harris and Tom Hiddleston. In fact, there’s a new report that suggests the chart topper has been left all alone after her ‘squad’ of girlfriends have abandoned her. They want nothing to do with the chart topper.

According to OK! Magazine, Taylor’s famous girlfriends, including Gigi Hadid, Cara Delevingne, Karlie Kloss, and more are apparently letting Taylor’s phone calls go straight to voicemail, as they’ve distanced themselves from her embarrassing feuds and break-ups. Taylor has had a disastrous summer PR wise.

Everyone from Calvin Harris to Tom Hiddleston, and even Kim Kardashian and Kanye West, have feuded with the ‘Bad Blood’ singer in one way or another. To put it simply, everyone is tired of her playing the victim in her feuds when she in fact is the one who has been planting stories about her exes in the media in order to look like the one who was done wrong in her break-ups.

And now Taylor is absolutely furious that none of her famous friends are standing by her side or defending her in the press. One source dished, “Taylor was furious that Karlie didn’t drop everything to be by her side,” said the insider. “Instead she partied at Burning Man with Cara Delevingne. Even when Karlie got back to New York, she was back to work at Fashion Week and hasn’t even sent Taylor a quick text.”

If that weren’t enough, Taylor thinks that her friends have been using her for fame and publicity this entire time, the same way Calvin Harris and Tom Hiddleston apparently were. What Taylor doesn’t realize though is that she’s the one who has been using her boyfriends and ‘squad’ friends to help promote herself as a high-powered celebrity with faithful model friends and Hollywood boyfriends. But now everyone has moved on, including Tom Hiddleston, who has just landed a lucrative Gucci contract, and Calvin Harris with his revenge song, ‘My Way.” Taylor, meanwhile, has been left with a damaged reputation that she’s trying to repair.

The insider added, “She’s discovering who her real friends are and she expects much more from her friends, but they’re getting tired of supporting her through endless rounds of drama and her image obsession.”

Of course, only Taylor knows what the real truth is between her and her friends. Tell us CDL readers, do you think Taylor Swift has been abandoned by her squad of friends? Is everyone sick of her drama? Let us know what you think in our comments section.

I LOVE YOU KARLIE! You’re such an exquisite person, always trying to make things better for others. Every day I’m inspired by how giving, loving, and thoughtful you are. Happy 24th Birthday!!! @karliekloss

Going through old pictures today, because @selenagomez just turned 24! I can’t imagine my life without you, Selena. HAPPY BIRTHDAY!

Happy Birthday Cara!! Thanks for making my life more exciting, spontaneous and imaginative. Everyone who knows you is better for it. Love you!!