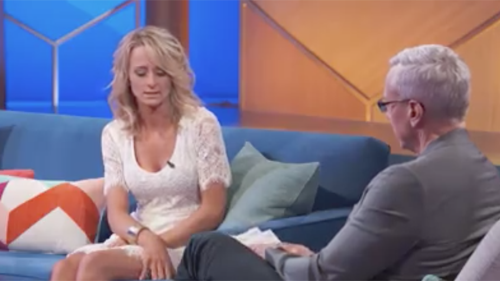 Tonight on MTV their series Teen Mom 2 continues with an all new Monday, June 13, season 7 episode, 13 called “Check Up With Dr. Drew, Part 1” and we have your weekly recap below. On tonight’s episode, part 1 of 2. Dr. Drew Pinsky meets with the cast to discuss their experiences during the season.

On the last episode, in the Season 7 finale, Jenelle’s fun day with her sons was ruined by an emotional meltdown over Barb; Kailyn and Javi’s marriage teetered on divorce. Did you watch the last episode? If you missed it, we have a full and detailed recap right here for you.

On tonight’s episode as per the MTV synopsis, “part 1 of 2. Dr. Drew Pinsky meets with the cast to discuss the events that took place this season of Teen Mom 2.”

It sounds like this special episode of Teen Mom 2 is going to be amazing. What kind of crazy drama are you expecting to see in this episode? What has been most exciting so far in Teen Mom 2? Sound off in the comments down below and let us know! Don’t forget to check CDL for our live recap of Teen Mom 2 at 9 PM ET!

This week on Part one of the Teen Mom 2 season finale Dr. Drew shows clips from the past season and asks the girls what sticks out for them from last season. Leah tells him that the situation with Ali was hard for her to see. Kailyn says “Everything. This has not been an easy season for me.” Dr. Drew then asks them about issues the girls have on social media. Janelle admitted that she and Kailyn had an issue over social media. The girls also acknowledge that even though they may have issues with each other they are all greatful to have each other to talk to because they can relate to each other and the experiences they have gone through.

First up to sit on the couch with Dr. Drew is Janelle. They look back at Janelle’s struggles over the seasons with the issues with Nathan and the pending charge that she has to deal with. They also show the issues she has had with Nathan and the ongoing battle she has had with her mother over custody of Jace. Dr. Drew asks her “Is the clock ticking until the next eruption?” Janelle says “I think a lot of that has to do with the stress between my mom and David.” Dr. Drew asks if that situation was better and Janelle says yes.

He then asks her about the assault charges. Janelle tells him “I swung at her because she came at me. We had a couple of altercations before this and she had been told not to come around my house.” Dr. Drew then comments on the tenderness that was shown between her and Nathan in the restaurant. He asks Janelle “Are there still romantic feelings there?” Janelle laughs and says “Definitely not. After the way David has treated me versus Nathan I would never take him back. I think it was all about the custody battle.” Dr. Drew then asks her “How is that going?” Janelle just laughs again.

When they return Nathan has joined them on stage. Dr. Drew talks to them about their relationship and Nathan says “We didn’t get married because the relationship was toxic. I wanted to go to counseling with her, but it was just too much.” Janelle and Nathan imeadiately begin arguing about the logistics of their relationship. Eventually Dr. Drew steps in and asks Nathan “Do you think that Janelle keeps Kaiser away from you the way Barb keeps Jace away from her?” Nathan says “Yes I do. I think she is using my son to manipulate me.” Once again the two begin to argue. Janelle says “I’m sorry that I am not with you anymore.” Nathan tells her “I don’t want you back. You have gained like thirty or forty pounds.”

Dr. Drew asks Nathan “Do you think David is a stabilizing force?” Nathan says “No. He should not be involved in co parenting with my son.” Janelle tells him “You told CPS that David was a heroin user.” Nathan denies this and says “I said you were living in a town where you used to buy heroin.” Janelle says “You will do anything to get my son taken away from me, but it’s not going to work.” She then asks Dr. Drew “Can we get my mom out here?” Dr. Drew says “I hope you guys can go to mediation and get something worked out so that Kaiser can have both of his parents.”

Barb, Janelle’s mom comes out next. Dr. Drew asks Barbara what she thinks about what happened between Nathan and Janelle on stage. Barbara says “Nathan is an alcoholic and a liar. He does shots all the time and he was mean.” Dr. Drew asks about Kiefer. Janelle says “Kiefer came for a one night visit. Nathan was so jealous that he choked Kiefer nearly to death and we never saw Kiefer again.”

Dr. Drew asks her about the issues between her and David. Barbara tells him “I have to yell because I’m short. When the cops came they were like Hi Barb.” Dr. Drew then asks about her relationship with David now. Barbara says “It’s much better now. We hadn’t seen each other for six months. We all went out to dinner and talked.” Dr. Drew then asks about Jace’s behavior issues. Barb says “Jace is doing much better now that they have changed his medication.” Janelle expresses her concern about Jace being on prescription drugs. She says “I worry that he is going to become dependant on these meds. I also worry about when he is a teenager and his friends find out he is on prescription meds that they will want to try and take them from him.” Dr. Drew tells her “They will reevaluate his meds over time so don’t worry about issues of addiction.” Dr. Drew then asks “Has David been a calming influence?” Both Barb and Janelle say that he is.

Dr. Drew asks them where they stand on the custody issue. Janelle says “We are going to court soon.” Dr. Drew asks “Isn’t there a less cantankerous way to handle this situation? Can’t you guys go to mediation?” Barb says “We could, but Janelle wants to go to court.” Dr. Drew says “We’ll leave it right there.” He tells David “Things do seem better. I suspect you have something to do with that so thank you.”

Leah is next to come to the stage and talk with Dr. Drew. They take a look back at Leah’s journey over the season. Dr. Drew talks to her about why she was so upset. Leah says “It’s hard watching Ali not be able to do some of the things she was once able to do.” Dr. Drew asks her “Has Corey’s family come around?” Leah says “Yes. They have become a lot more accepting.” Dr. Drew then asks her about the situation with Jeremy. Leah gets upset. Dr. Drew asks her why she is so upset.

Leah says “Jeremy has moved in with his new girlfriend and he doesn’t really see Addy all that much.” Dr. Drew asks her about how much she would like Jeremy to be involved in Addy’s life. Leah says “I want him to be there because I grew up without a dad and I know the toll it takes on a little girl.” She then tells Dr.

Drew “He’s not working. He claims he got laid off because he asked to come out here.” Dr. Drew looks confused. He says “Jeremy isn’t here, but he is blaming coming out here for him losing his job?” Leah says “I guess so.” Dr. Drew says “I have never known Jeremy to be a liar.” Leah laughs and says “I have.” Dr. Drew then asks Leah why Corey wasn’t there. She tells him “Corey coaches the girls baseball team. That’s why he’s not here.”

Corey joins them via Skype. Dr. Drew asks him why he wasn’t there. He tells him “We are all in a good place and I want to make sure it stays that way.” Dr. Drew addresses the fact that Corey felt that he was misrepresented. He apologizes for making Corey feel that way. He tells him “More than any of the other teen dads you have stepped up.” They also talk about Miranda and Corey’s new baby. They also talk about Corey’s worry. Corey says “I don’t worry so much anymore. Leah gets them to school on time and the girls are doing very well.” Miranda says hi in the background and Dr. Drew tries to get her in the picture but she runs away.