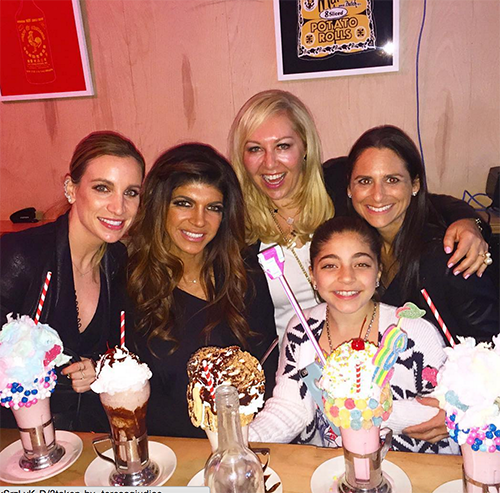 Is The Real Housewives of New Jersey star Teresa Guidice pregnant with baby number five? After serving over a year of prison time in a Connecticut prison for women, RHONJ’s Teresa Giudice was set free – and she had roughly a month to spend with her husband Joe Giudice before he checked into prison to serve his own sentence (which is several years). But, according to a new report, in the short amount of time that Teresa Giudice and Joe Giudice had together, she managed to get pregnant with baby number five!

Star Magazine is reporting that Teresa Giudice is rocking a baby bump, and apparently it is no secret in her inner circle that she is pregnant with her and Joe’s fifth child. An inside source dished to Star Magazine, “I immediately thought she looked pregnant. I mean, she’s showing. She’s probably just around three months.”

Here is the part that we are a little skeptical about. Joe Giudice and Teresa Giudice aren’t exactly a couple of fertile youngsters, they had a very small window of time to conceive between Teresa’s Homecoming and Joe’s going away party. Most couples their age try for months, sometimes years, to have a baby. And, let’s not forget, it’s believed that Teresa’s last child was born via IVF, and not even the old fashioned way because she was having trouble getting pregnant then.

If Teresa Giudice is indeed pregnant and has a baby bump, then congratulations are definitely in order because that is a miracle baby. But, we’ll believe it when we see it. After all, Teresa’s “baby bump” might just be a “bread baby” – prisons don’t exactly cater to low-carb diets.

What do you guys think? Is Teresa Giudice about to be a single mother of five? Share your thoughts I the comments below!