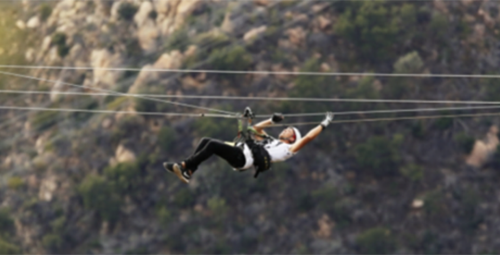 Tonight on CBS the Emmy award winning show The Amazing Race hosted by Phil Keoghan returns in an all new Friday May 13 season 28 finale called “The Only First That Matters” and we have your recap below. On tonight’s episode, the final three teams race from Shenzhen, China, to Santa Barbara, Cal.

In the last episode, the final four teams raced for a spot in the finale and a high-stakes foot race to the mat marked the end of one more team’s journey. Did you watch the last episode? If you missed it we have you covered with a full and detailed recap right here for you.

On tonight’s episode as per the CBS synopsis, “as the final three teams race from Shenzhen, China to Santa Barbara, Calif. for the final leg of the Race, they face a gut-wrenching leap of faith: jump off a building more than 150 feet high and perform a harrowing task of synchronized mountaineering.”

#AmazingRace starts with Phil meeting with all three teams in China and says the final leg will take them to LA. He says they all get upgraded to premium class on the flight home. The first stop in LA is Angelus Plaza. They all head to the airport and get their fancy first class seats.

At LAX, the teams run for taxis. At the tower, Tyler and Korey arrive first up and run up some stairs but Dana and Matt find the clue box lower down. The first #Roadblock is a leap of faith. They have to grab the clue that’s 175 feet off the ground. They have to leap out to grab it.

Cole says his mom is scared of heights. She’s out on a beam too and Cole says he said a prayer for her. Matt does a running jump and grabs it and they find out they need a helicopter ride to Santa Barbara. Dana and Matt are on the helicopter and Sheri is ready to make her leap.

She’s scared and is freaking out and crying. Cole says he can’t look. She jumps and misses. Matt says it’s a head game and she tells Cole at the bottom it’s so scary. She says she’s okay and will do it again. Tyler does the jump for them and he misses too.

Dana and Matt’s helicopter takes off for Santa Barbara. Sheri has to try again and says the clue is moved closer when you fail. Sheri gets it on her second try and is pleased. Cole grabs their bags and cheers her. Now Tyler has to jump again and it’s windy moving the clue around.

Tyler misses the second time and says fudge. Sheri and Cole take off in their helicopter. Tyler grabs it on the third try and tells Korey he’s sorry.

Tyler and Korey get into their helicopter. In Santa Barbara, Dana and Matt land and get into a cab to go to the harbor. They have to find the Theresa Ann, a specific fishing boat. They spot another helicopter coming in and Cole says there’s plenty of race left to catch up.

Matt and Dana get into their dinghy to go find the Theresa Anna among tons of other boats. They start looking. Sheri and Cole get their taxi. Dana spots the Theresa Anna and they get a clue. They have to go to Gibraltar Rock next.

Sheri and Cole look up the info on the boat and think it’s a museum. Matt and Dana struggle to find a taxi. Sheri and Cole find the dinghy and think they are looking for a museum not a boat. Sheri and Cole go right past the boat. Dana and Matt let their taxi go and it’s messing up their lead.

Tyler and Korey land and run for their taxi. Dana and Matt are freaking out. Tyler and Korey are in their dinghy now too. They are having trouble driving it. Sheri and Cole spot the boat by sheer luck and Sheri says they passed it twice. They head back to the dock and Tyler and Korey spot them.

Cole tells her to let them see the clue so they think it’s somewhere else. Sheri and Cole run back and get into a taxi and head to Gibraltar Rock but the first driver doesn’t know where it is. They run to the road looking for a clue.

Tyler and Korey find the right boat pretty fast. They are still struggling with the boat and run into things. Sheri and Cole run back to the cab but Tyler and Korey took it. They look it up on the phone and hand it to the cabbie.

They find another cab and get in and the driver Googles it. Tyler tries to give the cabbie directions but they worry she’s oblivious. Matt and Dana are in a cab too. They pull up and get their clue. It’s called Tyrolean Traverse. They have to get two halves of the clue with two obstacles.

Dana goes down while Matt goes across. Matt’s speed determines how she fast she goes down. She screams stop to him. Tyler tells the cabbie they’re in a hurry and then she gets on the phone. She’s pulled over to the side of the road.

Dana gets her half and Matt his and they have to work together to get back. Pulling her up is hard and they’re struggling. They finally make it back up and both are exhausted. Cole is worried this will be about heights and they show up.

Dana and Matt head to a vineyard for the next one. Sheri and Cole latch on and he’s doing the horizontal and Sheri the vertical. Cole says if you’re scared of heights, don’t make it to the finale of the Amazing Race. She cheers for him. Cole says it’s the most terrifying thing.

Sheri tells them Dana and Matt are already gone. Tyler and Korey start their turn. Sheri and Cole get in their cab and head out. Korey is going super fast and Tyler yells at him to stop. They start the climb back and are trying to make up time.

Dana and Matt drove past the clues – they are in the back of a truck on a hay bale. They now have to head back and are frustrated. They run around looking for a clue box. They run back and finally spot it. At this #Roadblock, they have to Roll Out the Barrel.

They must spell out nine cities they visited. Dana says she knew this would be important when she saw the hashtags on the clues. Dana is doing it for them. Sheri and Cole are headed there too and so are Tyler and Korey.

Dana is working fast on the clues. Dana has three cities left. Matt worries about the spelling on some of the cities. Dana calls to get checked and is told she got it right. She got the clue and runs off jubilant. Matt is thrilled and he hopes it’s for the finish line.

They are told it’s the finish line at the lake. They wonder if it’s nearby. Sheri and Cole make it there and spot the clue. Cole goes to do the Roadblock. Cole says he knows the cities. Korey and Tyler show up and Korey is doing the Roadblock.

Looks like all the teams were studying the hashtags. Dana and Matt spot a sign for the lake and they spot Phil. They race for the finish line and the others teams are all there cheering as they step up to the mat. Phil says 18 cities and 10 countries and they won the Amazing Race.

Dana and Matt do a little dance on the mat. Dana says they’re a thousand times closer now. Back at the wine casks, Cole gets their clue and they run off. Korey is still working. Sheri and Cole run up to the mat knowing they’re in second place.

Phil says they made the official second and did all 12 legs. Sheri says second’s not bad and Phil says their family must be so proud of them. Sheri says it was amazing to get to do this with her son and says they did the whole race and did it with a good spirit. Cole says they finally got a second.

Tyler and Korey jog up in third place. Phil says they had a good time and they’re still friends. Tyler says he’s so glad Korey and him did the race together and they had so much fun. Korey says he and Tyler met in college and says he’s the most confident person he knows.