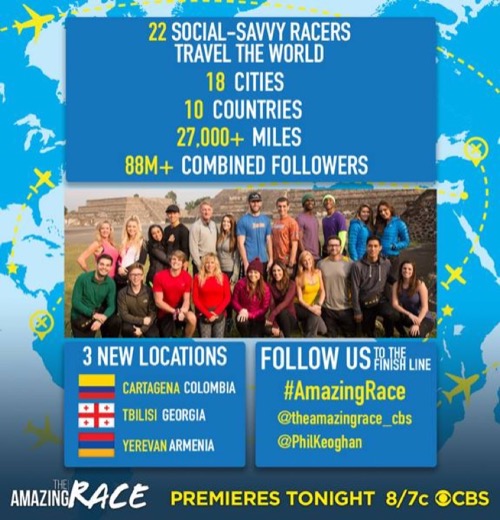 Tonight on CBS the Emmy award winning show The Amazing Race hosted by Phil Keoghan returns in an all new Friday February 12, season 28 premiere called Get in “I Should’ve Been a Boy Scout.” and we have your recap below. On tonight’s episode, eleven teams made up of social media personalities embark on a global race to win the top million dollar prize. In the opener, the duos begin the race from their homes and meet Phil Keoghan in Mexico City.

the last season finale Racers faced a third U-turn for the first time in the show’s history, and teams tried to power through an exhausting, late night detour on their way to an Indian wedding. Did you watch the last episode? If you missed it we have you covered with a full and detailed recap right here for you.

On tonight’s episode as per the CBS synopsis, “in a series first, 11 new teams of social media stars depart from their own homes all across the country and head for Mexico City, where they set off fireworks and dig deep at an archaeological Roadblock.”

#AmazingRace starts with Phil saying it’s a special season. The 11 teams are made up of social media stars. The teams get a text telling them the race is starting now. It’s 21 days and 18 cities for 27000 miles of travel.

The first clue is in Mexico City at the Monument of the Revolution. He says when he says go, grab your bags and head to the closest airport. He says go and the teams grab their bags and head out. They each leave from their home teams.

Tyler and Korey leave from LA and the cab driver asks them for an autograph. They met the day he made his YouTube channel. They are Amazing Race superfans and are determined to win. Dana and Matt are dancers and they have been engaged for almost four years.

They do Dance Tutorials Live and are choreographers. It’s the largest dance YouTube channel in the world. Erin and Joslyn host Out and About on Clevver Media, a huge YouTube channel. Zach and Rachel have been married almost a year and he makes Vine videos that are kind of magic.

Scott and Blair and she’s a YouTube video who does makeup and hair tutorial. Her dad is with her and he’s a lawyer and OB/GYN.  Sheri and Cole and mother and son. Cole makes videos with her. He does Vines with his parents.

Brodie and Kurt do Frisbee trick shot competitions and videos. Burnie and Ashley are a dating couple and they run Rooster Teeth, a YouTube gaming channel. Sheri and Cole meet up with the model couple at the Atlanta Airport.

Burnie and Ashley attract a crowd at their airport. Brittany and Jessica try out the pilot seat. Everyone is on the way to find Phil in Mexico City. The teams are off and running. They run for taxis. They pull up and run for Phil. They have a #Detour right away.

Mariachi Madness has them find a musician in the giant square that’s not making any noise with the instrument. Great Bulls of Fire makes them construct a papier mache bull and load it with fireworks and set it off. The teams seem to split evenly.

Many of the teams get lost right off the bat. The mariachi square is packed with musicians. The racers have to sift around and look for someone not making any noise. Brodie and Kurt think they found one but did not.

Erin and Joslyn are also there looking. Dana and Matt show up. Sheri and Cole are lost and find a sole guy with a guitar. Burnie and Ashley make it to the fireworks challenge. Marty and Hagan are there too. Scott and Blair are there too. Darius and Cameron are lost.

At the fireworks place, Tyler and Korey are zipping along. Burnie and Ashley are working hard. Darius and Cameron show up there. Brittany and Jessica show up also. Dana and Matt show up first and get the earliest time at 730 am. Brodie and Kurt and Erin and Joslyn are close behind.

There is only one 730 slot left. Sheri and Cole find a non-playing mariachi and get their clue. They run out. Zach and Rachel find one too but waste their time dancing around. Sheri and Cole are in the taxi heading to the next spot.

Burnie and Ashley are given thumbs down and have to fix something. Sheri and Cole are in the cab and get out. They get the last 730 am slot. Zach and Rachel get the first 740 am slot when they show up in 5th place.

Next morning, the teams are off to an early start. They show up to the assigned spot and race for the clue. They face a #Roadblock and have to come to a cave and search for 13 pieces of a mask then build the mask and get the nod from an elder to get the clue.

It’s at an archaeological mine and one of them is claustrophobic. Matt digs around and Kurt is in there too. They each have a pit assigned to them with sand and they have to dig. Matt thinks he has all 13. The next group shows up 10 minutes later and head inside.

The first four have their piece and head for the drums. That’s where they have to assemble their masks. Sheri has to go back in and get more pieces since they all had to be the same color. The third group shows up and heads down into the caves.

Matt has to go back for more pieces and so does Marty. Scott wanders around and dropped some pieces. Jessica comes up out and looks around. They have no clue the drums are down in the cave. Marty is bleeding after she cuts herself.

Dana and Matt leave in 1st to head to the Pit Stop at the Museo Soumaya. Tyler and Korey leave in 2nd. Scott is still wandering around above ground and Blair is in a panic. He finally finds the last piece he dropped and goes back down.

Brodie and Kurt arrive in 5th and Burnie and Ashley check in at 6th. Sheri and Erin wonder about taking the penalty together. Brittany and Jessica check in in 7th and Marty and Hagan in 8th. Erin finally gets it and she and Joslyn leave in 9th place.

Erin and Josslyn check in at 10th place. Scott and Blair show up last and Phil breaks the hard news to them that they have NOT been eliminated from the race. He says you’re still in it and says they get another leg and she says bring on the speed bump.