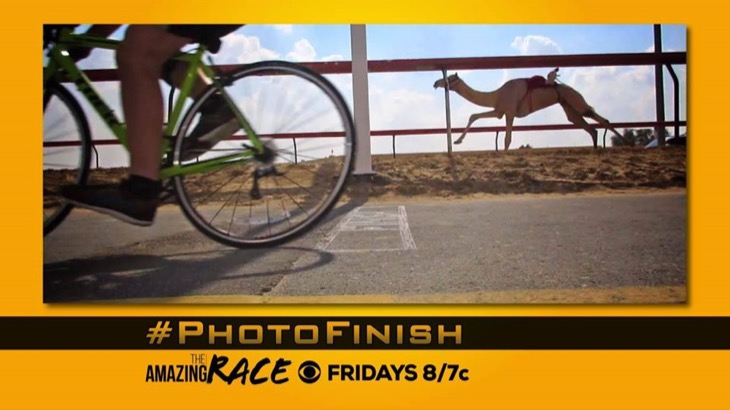 Tonight on CBS the Emmy award winning show The Amazing Race hosted by Phil Keoghan returns in an all new Friday April 15 season 28 episode 8 called Get in “I Have a Wedgie and a Half.” and we have your recap below. On tonight’s episode, the race continues in Dubai.

In the last episode, teams traveled to the country of Georgia where they learned how to make a traditional candy and go deep into the trenches at an old Georgian winery. Did you watch the last episode? If you missed it we have you covered with a full and detailed recap right here for you.

On tonight’s episode as per the CBS synopsis, “the continues in Dubai, UAE, where teams race camels and swim with sharks.”

#AmazingRace starts in Tbilisi, Georgia with Zach and Rachel leaving first and thrilled to be headed to Dubai. Outside the city, there’s a Bedouin camp where the teams have to come pick up a roaming gnome. The teams leave staggered out over a couple of hours in the dark.

At the airport, all the teams make it onto the same flight and they wonder what they’ll do in Dubai. They touch down and it’s a foot race to some nearby SUVs. They drive out of the airport excited to see the gnome.

The have to head out into the desert. A couple of the teams miss the exit they need. Sheri misses it. They have to look for race flags and are out of the city and in the sandy area. They come up on camels in the road then spot the flags.

They hoof it to the tents and are greeted. Korey and Tyler are first to make it there and are surprised to be greeted with a nose kiss and they find out what the #Detour is. One is camel racing where they have to race a camel while peddling a bicycle.

In Oasis, the teams have to lead some camels a mile to a camp. Tyler and Korey decide to race. Zach and Rachel and Burnie and Ashley all pick racing. Dana and Matt decide on the camels to the camp. Sheri and Cole are back on the path they need but are behind.

Kurt and Brodie’s SUV is stuck in the sand and that throws them off. The teams head to a camel race course to complete their race challenge. Brodie and Kurt have the express pass and wonder if they need to use it this leg.

At the #RacingCamels challenge, they set off against the camels. Two teams are there racing and are stunned by how fast the camels are. They all lose to the camels. Burnie and Ashley decide to switch events since she can’t ride fast at all. Zach and Rachel show up and she’s also worried about bike riding.

Sheri and Cole finally make it to get their detour clue and pick up their gnome. They’re in last place. Dana and Matt struggle to haul the camels to the camp and follow race flags. Brodie and Kurt barely beat the camels and are jubilant.

Rachel tells Zach have to leave to try the other one when she can’t keep up. Brodie and Kurt get the clue and leave in first place. They head to Aquaventure. Dana complains to Matt that she can’t do it and says she’s going to pass out.

They are given some bread to try and camel milk. They toast to the race. Dana says it was really good. They get their clue which puts them in third place. Sheri and Cole are at the camel race and are stunned by how fast they go.

Cole and Sheri are stunned at how far away the finish line is and how fast the camels go. They lose. Brodie and Kurt make it to Aquaventure which is a water park. They get their clue and are told they have to swim with sharks. One has to go in and retrieve a puzzle they must solve.

Brodie has to get into a pair of gold trunks and go into the water. He goes to get and is a little freaked out. He’s a bit worried about the sharks. Brodie comes out and starts the puzzle. Kurt teases him about the tiny gold trunks.

Tyler and Kory worry they missed the Atlantis hotel. Brody struggles with the puzzle where you have to get the letters RACE into matching holes shaped like letters. Zach and Rachel show up with their camels and get a clue that puts them in fifth place.

Sheri and Cole are on try two of the camel race. They win it. They get the clue that puts them in sixth place. Kurt tells Brodie to chill and focus. Other teams make it to Aquaventure and get into their tiny suits. Kurt and Brodie use their express pass and are told to go to Poseidon’s Revenge, a huge water slide.

Burnie goes #SwimmingWithSHarks and Dana is in it for her team. Tyler and Korey are there too and they remember a team that went out on the slide in a prior season. Korey gets the puzzle for them. Sheri and Cole seem to be lost again.

Brodie and Kurt face the slide. You get into a tube and the bottom drops out from under you. Brodie goes first. Korey is still working on the puzzle with the others. Zach is with the sharks. Burnie gets the letters in and he and Ashley move into second place.

Tyler and Korey take over third place when they get their clue for the puzzle. Sheri and Cole are still wandering lost. Burnie is terrified of the slide but Ashley loved it. Tyler and Korey watch them go. Zach gets his puzzle. Dana is still struggling.

Tyler and Korey do the slide next. Brodie and Kurt miss their street and have to turn around but are stuck in traffic. They worry they wasted the express pass and won’t take first. Dana is getting closer with her puzzle. Sheri and Cole finally make it to Aquaventure.

Dana solves the puzzle and then Zach and Rachel face the slide. Brodie and Kurt panic when they see Burnie and Ashley. They get onto boats to race across some water. They are going to have a foot race as they spot Phil at the mat.

They run. Brodie and Kurt land in first place. Burnie and Ashley are a close second. Brodie and Kurt win a trip to Helsinki Finland. Dana and Matt do the slide and are in fifth place. Tyler and Korey are on the boats. They check in for third place.

Dana and Matt bicker in the car over directions. Dana says something is mentally wrong with Matt and she rants. He tells her to calm down and quit fighting and getting worked up. She says she’s done with him and disappointed. She calls him psychotic.

Sheri and Cole are at the slide and he screams like a little girl. They head off in last place. Dana tells Matt to stop the car and ask for directions. Dana says she grew up in a house full of yellers. She keeps chewing Matt out. She says she’s going to quit and won’t get back in the car.

They finally get back in the car. Sheri and Cole run out of Aquaventure. Zach and Rachel check in at fourth place. Dana and Matt make it their after dark and Phil says they do not look happy. Dana says they had a huge argument and handle stress differently.

Phil says they’re still in at and check in at fifth place. Dana says there’s no excuse for how she treated him. Sheri and Cole show up in last place but smiling. Sheri says they just accepted what it is but didn’t give u. Phil says it’s a non-elimination leg and Sheri starts crying. They’re thrilled. They face a speedbump in the next leg.