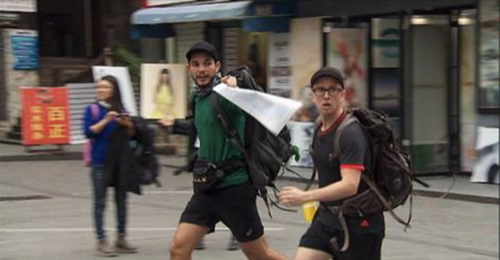 Tonight on CBS the Emmy award winning show The Amazing Race hosted by Phil Keoghan returns in an all new Friday May 6 season 28 episode 11 called “That’s Money, Honey” and we have your recap below. On tonight’s episode, the race continues in Shenzhen, China.

In the last episode, the racers visit Lembongan Island, Indonesia, where they faced a double U-turn and a gut-wrenching, 40-foot plunge. Did you watch the last episode? If you missed it we have you covered with a full and detailed recap right here for you.

On tonight’s episode as per the CBS synopsis, “The final four teams race for a spot in the finale and a high-stakes foot race to the mat will mark the end of one more team’s journey.”

#AmazingRace starts in Indonesia where they teams will head to China to Shenzhen, the Silicon Valley of the country. They will find their first clue there at the airport. Tyler and Korey tease Burnie and Ashley and call them #TheVillains.

Sheri and Cole talk about them not being up to par with the other teams. Sheri says they’ve been trying to win but seem destined for second to last or last. All the teams make it onto the same flight to China. They make it there and they race for the departure hall. Tyler and Korey are their first.

They are told to go to the Eiffel Tower for the next clue. Dana and Matt are there too and then they hide their clues so no one else sees it. Burnie and Ashley move into third place. Tyler and Korey lie about finding the clue box.

Burnie and Ashley show them the clue and that busts out Tyler and Korey for fibbing. Tyler and Korey are annoyed that they busted them out. The teams now run for the bus and only two teams get onto it. The other teams miss it.

The first two teams make it there and climb the Eiffel Tower. The theme park called Window of the World has a bunch of famous landmarks. They have a #Roadblock calls It’s a Small World which involves trivia on the landmarks.

Dana and Tyler work together on the roadblock. Burnie has to do it for his couple. There are riddles that give you clues to go to landmarks and collect stamps. Sheri and Cole make it there in last place. Sheri has to do it and promises to do her best.

Cole cheerleads his mom but she’s confused by this challenge. Sheri panics when she sees Tyler and Dana are working together. Dana and Tyler have three of their stamps. Sheri has one. Tyler and Dana are up to five. Burnie has four with two to go.

They miss the Taj Mahal one and have to go back. Sheri is up to four. Burnie gets his last one and says Tyler lied to him again. Dana and Tyler are at the Taj Mahal and get their stickers. Burnie runs up to get his passport checked. He gets his right the first try.

Sheri has two things left and decides to ask people. She gets help for one and then still needs the palace. Tyler and Korey make it to the park followed by Dana and Matt and Burnie and Ashley. The teams face a #Detour and have a choice of Commuter Cycle or Master of Arts.

They have to ride a weird automated device or deliver artwork and hang them. Ashley and Burnie do the commuter thing while Tyler and Korey and Dana and Matt go for art. Sheri gets her last stamp and heads back to get it checked.

Cole cheers her when she gets back and she gets the clue and they’re still in last place but rush off happy. Tyler and Korey make it to the art place. They find the vendor. Dana and Matt show up a bit later. Tyler and Korey get their packages of painting to deliver.

Dana and Matt grab theirs and head out. Tyler and Korey stop to ask for directions. Burnie and Ashley hop the commuter cycle will be faster but harder. Sheri and Cole get their clue and decide to do commuter cycle.

Tyler and Korey make it to their gallery, put on aprons and have to hang a complicated set of paintings that form one larger picture. They joke about being #CarpenterJocks. Dana and Matt find their gallery and start figuring out their puzzle.

Both have to make adjustments. Sheri and Cole are on the train heading for the cycles. Burnie and Ashley wonder if they should give up on it. They switch to the other detour. Sheri and Cole get their and change clothes.

Sheri and Cole are both struggling but she’s getting the hang of it faster. Burnie and Ashley get their paintings and head out. Tyler and Korey fix their painting and get their clue to take 1st place. They have to go to a library terrace which is the pit stop.

Dana and Matt fix theirs and get a clue to move into 2nd place. Sheri and Cole agree they have to stick it out since the others are all doing art. Burnie and Ashley go to hang their paintings and find their gallery. Sheri and Cole are getting better.

Tyler and Korey head to the pit stop followed by Matt and Dana. Sheri and Cole are struggling but committed. Tyler and Korey and Dana and Matt make it to the museum but struggle to try and figure out where they should be to find Phil and the pit stop.

Phil waits in the rain and Tyler and Korey race up the steps and leap onto the mat. They are in first place again. They are also in the top three for the $1 million prize. Dana and Matt show up not long after to take second place.

Burnie and Ashley are hanging their pictures and are told they got it. They head out to the library. Now Sheri and Cole are ready to do their commute. Sheri and Cole make it and get their clue from a briefcase and they head out.

Sheri and Cole make it there – they are the #ComebackKids and everyone greets them with hugs. They take third place. Burnie and Ashley show up several minutes later and are eliminated. Burnie is disappointed not to make it to the final leg. He says they just had a bad day at the race.