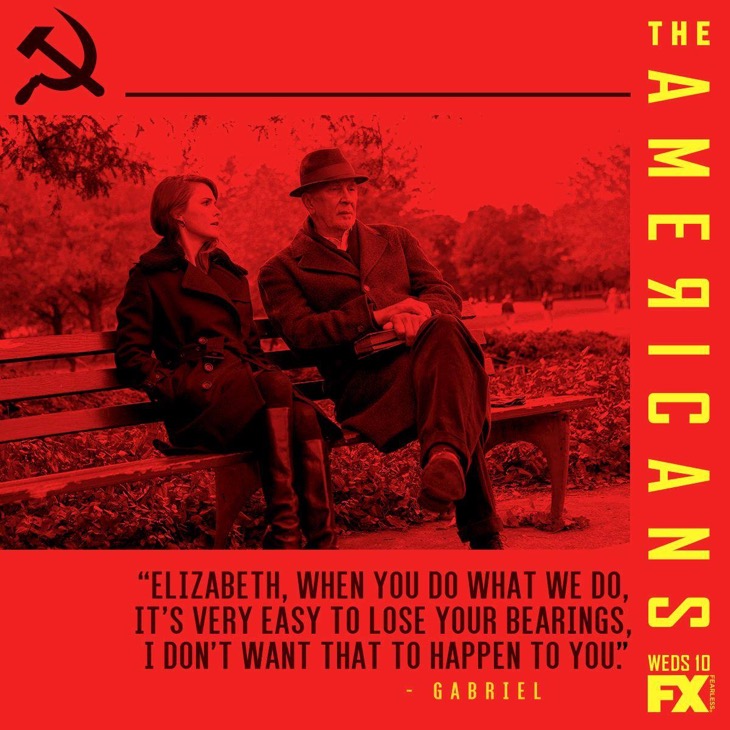 Tonight on FX The Americans airs with another all new Wednesday, March 30 season 4 episode 3 called “Experimental Prototype City of Tomorrow,” and we have your weekly recap below. On tonight’s episode, Paige (Holly Taylor) faces new burdens due to her family’s secret and Philip (Matthew Rhys) and Elizabeth (Keri Russell) try to keep their cover without destroying their daughter.

On the last episode Philip tried with increasing desperation to get rid of a sensitive and dangerous package as family tensioned in the Jennings House reach a boiling point when Paige shared a secret of her own. Did you watch last week’s episode? If you missed it we have a full and detailed recap, right here for you.

On tonight’s episode per the FX synopsis “Philip tries with increasing desperation to get rid of a sensitive and dangerous package as family tensions in the Jennings House reach a boiling point when Paige shares a secret of her own.”

Tonight’s episode looks like it is going to be a great and you won’t want to miss it, so be sure to tune in for our live coverage of FX’s “The Americans” Season 4 episode 3– at 10 PM EST!

Tonight’s episode of The Americans kids off with Philip lying in bed with Martha – she is still is getting used to what her husband looks like without his wig and glasses on. Philip catches her staring at him, she confesses she is not comfortable with his new look yet. Meanwhile, Philip’s real wife Elizabeth is at a Mary Kay meeting – sampling make-up with other women, and her friend Young Hee.

Philip and Elizabeth pay Pastor Tim a visit – to try to keep him quiet about their secret that Paige spilled to him. They spin their Russian spy professions, they insist that they are peace makers and they work with every one to ensure that there is no nuclear war. Pastor Tim wants to “do the right thing” and report them. Elizabeth warns Tim that if he turns them in – then they will go to prison and their children will go in to foster care, and it would destroy Paige. Tim agrees to “sit on it for a few days” and get back to them. Before they leave, Tim confesses that he shared their secret with his wife Alice.

Philip visits Gabriel and updates them on their predicament – he also brought back the viles of biological warfare, that he hasn’t been able to get rid of last week. Philip and Elizabeth want to leave ASAP. Gabriel tells them to keep calm and wait to see what the center wants them to do. In the mean time, Paige needs to step up and work on keeping Pastor Tim quiet. Philip heads home and sits down with Paige, he warns her that Tim spilled their secret to his wife Alice.

Elizabeth heads out with Young Hee, Young is teaching her how to sell Mark Kay make-up, they go door to door and make a couple of sales. Young jokes about how good Elizabeth is at it – she should be a used car salesman. They sit down in the park to take a break. Young invites Elizabeth to her family dinner later in the week.

Gabriel meets with Claudia in the middle of the night and tells her about Tim and Alice. He wants to get them out of there ASAP, their cover is about to be blown, they are dealing with way more than they can handle. Claudia reassures Gabriel that everything is going to be fine, and she tells him to have faith.

Gabriel sits down with Elizabeth and Philip – he tells him to take their kids away on a family vacation to Epcot. He reassures them that when they return, Tim and Alice will have had an accident. Philip says that it is a horrible idea – Paige is going to know that they are responsible, and she will never forgive them.

Paige visits Tim at his office – she is furious and confronts him about telling Alice that her parents were spies. Tim insists that he was just worried about Paige, and they need to find out if they are hurting people. Paige storms out, when she arrives at home – she learns that they are taking a vacation to Epcot in Florida. Paige takes her parents aside and tells them about her convo with the Pastor, she thinks he is acting weird and got annoyed with her.

Elizabeth heads back undercover and puts on her blond wig and goes to Young Hee’s family dinner for a night of Korean cuisine.

Nina is not doing too well – she is facing more treason charges after getting caught trying to sneak a letter out for the other prisoner. Her lawyer says that there is no question of whether she will be found guilty, now they just have to wait and see how harsh the sentence is. Nina heads back to her room and dreams about Stan.

At the FBI office, Gaad is not happy with their sloppy work. Meanwhile, Stan is busy stalking Martha – he can tell that she has been acting strangely after Gene’s death. He tells Aderholt that he has been following her after work and she doesn’t always go home, she has been sleeping somewhere else. While Stan is worried about Martha, his ex-wife Sandra stops by Philip’s house.

They meet up with William – the guy that gave them the pathogen, they tell him what happened and William turns around and makes a run for it. Obviously, whatever the disease is – it’s contagious. Philip chases William down and spits in his face, so now all three of them have been infected. William takes Philip and Elizabeth back to his apartment. He has a super strong antibiotic, he injects it in to his arm, and then gives Elizabeth and Philip a shot too. There is no telling whether or not it will work, but it is their best shot

William goes to Gabriel’s house with Elizabeth and Philip – he is still lying on the floor and gasping for air. William takes the pathogen out of the freezer and puts it in the oven – he says that the heat will kill it. Then he gives Gabriel a shot of the antibiotic too. It looks like they aren’t taking their family vacation to Epcot. William tells Elizabeth and Philip that they are all going to have to stay in Gabriel’s house under surveillance for 36 hours to make sure that none of them show any symptoms of ganders.

Meanwhile, Paige and her little brother are at home playing video games – waiting for their parents…who aren’t coming home.