After The Final Rose – Jojo Fletcher Next Bachelorette: The Bachelor 2016 Recap Season 20 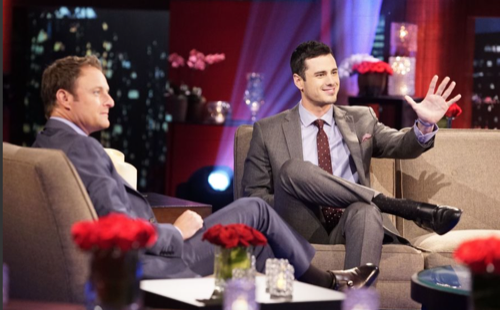 The Bachelor 2016 After The Final Rose airs on ABC this evening with an all new Monday March 14 season 20 episode and we have your weekly recap below. On tonight’s episode, Ben Higgins recaps the season in an interview with Chris Harrison. Also: The final two bachelorettes discuss the outcome of the show; and the next Bachelorette is revealed.

On tonight’s finale, the compelling live three-hour television event will began with America watching along with the studio audience as Ben Higgin’s journey to find love came to its astonishing conclusion.

On tonight’s show as per the ABC synopsis, “Immediately following the dramatic Season Finale, emotions run high as Ben sits down with Chris Harrison – live – to discuss his final two women of the season: Jo Jo, the beautiful real estate developer, and Lauren B., the stunning flight attendant. The Bachelor takes us back to Jamaica, where he spent the emotional last days of his journey, telling both women that he loved them – a “Bachelor” first.

Both ladies are back to sit with Ben to talk about the sensational outcome. It’s the live, unpredictable ending to his adventure to find everlasting true love. Does Chris Harrison have a trick up his sleeve? Anything could happen! In addition, the new Bachelorette will be revealed, live.”

We will be live blogging tonight’s episode of the The Bachelor 2016 After The Final Rose and you just know there is going to be tons of drama, cat fights and tears. So come back tonight at 8PM for our live recap of tonight’s episode. While you wait for the recap, hit the comments and let us know how excited you are for this season of The Bachelor?

It’s time for the always entertaining After The Final Rose live episode – Chris Harrison takes the stage. He dubs Ben’s final rose ceremony as one of the best in Bachelor history. Ben told Chris last week that he is ready to marry his fiancé right now – so Chris has flown in Ben’s parents, Lauren’s parents, and his pastor from back home – just to see if Ben will make good on what he said and get married right there on the ATFR stage.

Ben Higgins joins Chris Harrison on stage – and there is a lot to talk about. Ben explains that the Bachelor process is not easy, and his goal was to make a commitment at the end, and everything turned out okay. He can’t wait to show off Lauren and be seen together for the first time in public since the final rose ceremony.

Before Ben can sit down with Lauren though – he has to face Jojo for the first time since he dumped her. Jojo joins Ben and Chris on stage and awkwardly hugs Ben “hello.” Jojo explains that it was really hard watching the finale – and it literally hurt her stomach.

Ben insists that he never regrets having met Jojo or having him in her life, when he said he loved her he meant it. Jojo says that after watching the final episode, it helped her to see how hard it was for Ben to send her home. Ben just doesn’t want there to be any hard feelings between them.

Overall, Jojo seems to be in good spirits after getting dumped on national television. She insists that she is happy for Ben and Lauren and she wishes them the best. Jojo says that “everything happens for a reason” – and apparently she wasn’t meant to marry Ben.

Before Jojo Fletcher leaves, Chris asks her if she has any more questions for Ben. Jojo jumps at the chance and wants to know why Ben chose Lauren over her. Ben explains that on the last day he grew tired of having his feelings being in two places – and he decided that it was time to focus on one of them, and he couldn’t picture his life without Jojo.

Chris Harrison stands up and announces before Jojo Fletcher leaves the stage that she is the next Bachelorette. The crowd goes wild – probably because Reality Steve swore up and down that the next Bachelorette was going to be Caila Quinn, so everyone is truly shocked by the news.

Now, it’s time for Lauren Bushnell to join her fiancé Ben Higgins on stage. Of course the audience greets her with a ridiculous amount of cheering. Lauren explains to Chris Harrison that every day she “falls more and more in love with him.” Lauren insists that she wasn’t upset that Ben told Jojo he loved her too. And, she knew it was going to be on television because Ben told her all about it the day after they got engaged – so that she could brace herself.

Chris Harrison asks Lauren what her and Ben’s plans are now. Lauren says that she is moving to Denver and she can’t wait to get married. Jimmy Kimmel stands up in the audience and interrupts, he wants to know what “really happens in the Fantasy Suite” and he has a couple of other ridiculous questions for the new couple.

Before the “After The Final Rose” show ends – Chris Harrison puts Ben Higgins on the spot. He reminds Ben that he said he wanted to marry Lauren right now, and Chris has brought a pastor in to officiate. Chris Harrison pushes him to get married on live TV, but Ben isn’t having it. He thanks his pastor for flying all the way out there, but says they wont be needing them.

Ben does have a surprise for Lauren though. He had her family flown in – and he wants to officially propose to Lauren in front of her family, so that they can share the moment with her. Ben gets down on one knee…again…and ask Lauren to marry him. She says “yes” … again.

Afterwards, Chris Harrison jokes that Ben “wiggled out of that very well.” They bring all of Ben and Lauren’s family up on stage and Chris jokes that it is “one big beautiful family and this is their first reunion.” Ben’s dad David says that Lauren and Ben were meant to be, and the Higgins-Bushnell Family is going to be great.