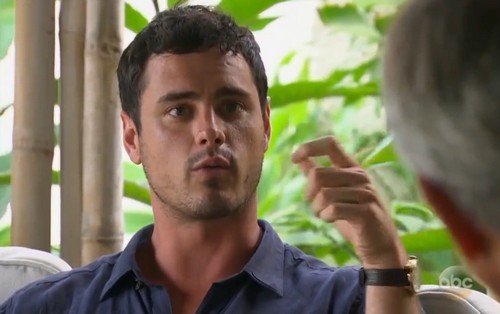 The Bachelor 2016 spoilers tease that Ben Higgins might not be the “perfect Bachelor” after all – and it looks like he broke a cardinal and unspoken rule on the television show. This week on Bachelor Live Chris Harrison released an all new spoiler video – of what appears to be from the final episode of Season 20.

In the promo, Ben Higgins is an emotional mess and he announces that he can’t decide between the final two women – because he is in love with both of them.

Of course after the shocking Bachelor 2016 video aired – the co-hosts on Bachelor Live had a field day with it… this is HUGE. Ben Higgins was on stage, and he confirmed that he did “fall in love with two women on the show” – AND he told both of those women that he loves them, which is a huge no-no.

How many awkward times on The Bachelor have we seen women profess their love for The Bachelor – and he just thanks them or kisses them, because he doesn’t want to say it back. There is nothing more horrible than telling a girl that you love them, and then dumping her on national television. And, no one wants to explain to their fiancé after the episode airs that she wasn’t the only one that he was in love with.

The fact that Ben Higgins told TWO girls that he loved them on Season 20 of The Bachelor really changes the game completely. First and foremost, The Bachelor 2016 spoilers from Reality Steve revealed weeks ago that Lauren Bushnell was the 2016 winner.

Supposedly, Ben and Lauren Bushnell are the perfect couple and their engagement is all rainbows and butterflies. But, that may not be the case anymore. We’re going to go out on a limb here and assume that Lauren is mortified that she was not the only woman Ben was telling that he loved – and she may be second-guessing their relationship right now.

Second of all, who is to say Lauren Bushnell is The Bachelor 2016 winner? Spoilers have teased since day one that Lauren Bushnell had the competition in the bag since day one – and Ben was basically going through the motions with the other girls for the show, but that obviously is not the case. Maybe Ben gave the final rose to the other woman that he is in love with?