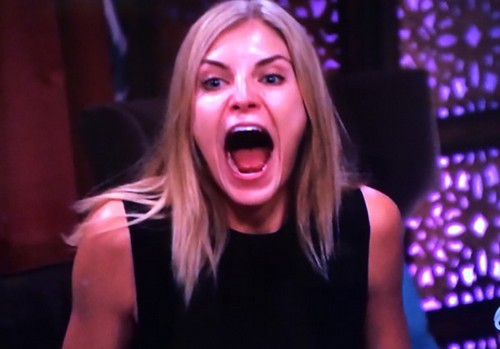 Olivia Caridi is Season 20 The Bachelor 2016‘s villain with her drama stirring going into full effect on the second episode. Steven Tyler is going to get a run for his big mouth money if Olivia keeps dropping jaw on The Bachelor.

Yep. Steven Tyler and his giant mouth was all I could think about as soon as I watched Olivia Caridi open her huge mouth for the first time on the when the first date card had arrived. She was seriously obnoxious with the dropped jaw of “excitement.”

The best part of that whole scene was when she finally shut her mouth after her name wasn’t read off of The Bachelor’s first date card. What a priceless moment that we should cherish throughout the rest of the already crazy season.

Admittedly, I was surprised when my distain for Lace was shifted to Olivia. My first impression of Olivia was matched up with Ben Higgins. I was thrilled when her gave her the first impression rose and giggled at crazy Lace and the fool she made of herself over it all.

But now I see Olivia in a whole new light. She’s not a nice girl like we all first though and everyone, except perhaps Ben knows it. But he will soon enough. Unless of course what he’s looking for is a girl who can open her mouth really, really big…. yep, I just went there. Don’t deny you were thinking it too!

It’s no secret what so many fans are thinking either. That Olivia Caridi is only on the Bachelor 2016 for the fame and a career boost. We have at least one of those every season, don’t we? And if this is true, then how long will it be until Ben sees through her fake interest in him?

Will several of the other girls have to sacrifice themselves by throwing her under the bus to make Ben Higgins realize what he’s really dealing with here? You know it happens every season. The ladies always call out the villain, The Bachelor guy will boot at least a couple of those ladies before he comes to his senses and realizes that what there were saying was in fact true.

I for one hope that we get to see the unraveling of Olivia sooner than later. I would love to see him make a smart choice that he will be able to live with at the end of this ride on The Bachelor 2016 crazy train. Keep coming back to CDL for all of your Bachelor updates and gossip!