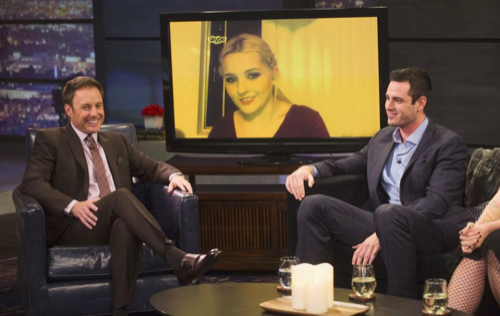 The Bachelor Live airs on ABC this evening with an all new Monday January 11, season 1 episode 2 and we have your weekly recap below. On tonight’s episode, the second episode of season 20 “The Bachelor” is discussed.

On the last episode, Bachelor Live featured Harrison discussing and dissecting the premier episode of “The Bachelor,” alongside cast members and celebrity fans. The man who has seen it all as the host of “The Bachelor” franchise since the first rose ceremony took place over 13 years ago, Harrison presented questions and comments from viewers, debut deleted scenes, outtakes and exclusive extra content, all the while allowing members of #BachelorNation to have their say. Did you watch the last episode? If you missed it, we have a full and detailed recap right here for you.

On tonight’s show as per the ABC synopsis, “Harrison will be discussing and dissecting the second episode of “The Bachelor,” alongside cast members and celebrity fans.”

We will be live blogging tonight’s second episode of the The Bachelor Live. So come back tonight at 10PM for our live recap of tonight’s episode. While you wait for the recap, hit the comments and let us know how excited you are for this season of The Bachelor Live!

Tonight’s episode of Bachelor Live kicks off with Chris Harrison, the host, and he has a special guest – Kardashian momager Kris Jenner. And, former Bachelor Chris Soules is also joining them. It’s the Chris, Kris, and Chris show.

The hosts get right in to it – and Chris Harrison asks Kris what she thinks about Olivia. Kris says that she thinks that Olivia needs to “slow her roll.” She thinks Olivia is being a bit too aggressive for week two. Chris Soules says it reminds him a lot of how Britt handled things on his season. Basically, Olivia already has a target on her back – so she can’t get too cocky.

Chris Harrison takes their first fan call – the caller thinks that Olivia has rubbed too many people the wrong way and she is heading on a downward spiral. Chris admits that he doesn’t know if Olivia is “going to get out of his way.”

Next they bring up crazy Lace – Chris laughs and says that Lace is the Ashley Salter of his season. Lace is probably a great girl in a normal situation. But, Lace also reminds him of Kelsey Poe. Kris Jenner laughs that if Kelsey and Ashley bad a baby – it would have been Lace.

Ben Higgins joins them on stage and Chris Harrison has a special surprise for him – Kaley Cuoco via satellite. Kaley rave about how Ben is the sweetest guy ever – she is obviously a bit drunk and confesses that she drinks a box of wine while she watches The Bachelor. She tries to ask Ben whether or not he is in love with one of the girls on the show, but Chris Harrison cuts their video chat short.

Next, Chris Harrison asks Ben what he thought about LB leaving so unexpectedly. Ben admits that he was thrown off – he thought that he and LB were doing fine, he definitely didn’t expect her to quit. Kris Jenner gives Ben a peptalk and tells him that he is amazing and he just needs to “do his own thing and follow his own heart.”

Chris shares a never-before-seen cli of Jubilee and Ben. Jubilee took Ben aside and gave him a teddy bear since he said that he felt unloveable. Jubilee joked that she he an sleep with the teddy bear in his bed – but eventually she is going to take his place. Chris Soules can totally relate to the way that Ben feels – he admits that when he joined the show as The Bachelor, he was afraid that no girls would come on the show to date him.

It’s time for the Bachelor news segment of the show – Chris Harrison revisits some of the most iconic moments in Bachelor history. They kick the segment off with Ashley Salter killing zombies on week two of Chris Soules’ season in Mesa Verde. Chris Soules says he misses Ashley – they lost touch after he set her home. Next, Chris shares a flashback of Jake’s season of the Bachelor – when he learned that Rosalind was cheating on him with a member of the camera crew. Victoria from Juan Pablo’s season definitely made Week 2 interesting to when she got wasted and made a fool of herself and then went in the bathroom and started crying and throwing up and shouting.

Former Bachelor star Ali Fedotowski joins via Skype to make a huge announcement – she is currently pregnant, and in her second trimester. She also is happily engaged. Chris Harrison jokes that whether or not the baby is a boy or a girl – they can name him or her Chris. Tanner and Jade appear on live video next – they announce that they have picked a wedding date within the next few weeks, it is going to be aired on ABC, and Chris Harrison is going to officiate the ceremony.

Before tonight’s episode of The Bachelor Live ends, Chris gives Ben some “Bachelor To Bachelor” advice and Chris Harrison shares a sneak peek of next week’s episode. It looks like things are going to get crazy in the Bachelor house – and Olivia is going to stir up some serious drama.