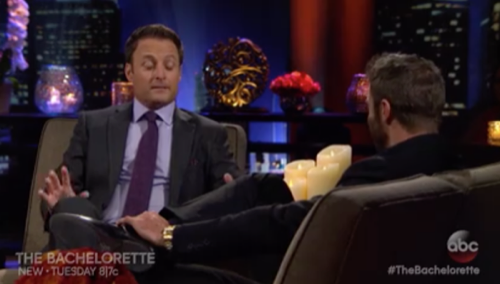 The Bachelorette 2016 airs on ABC this evening with an all new two hour special Tuesday, July 26 season 12 episode 10 called “The Men Tell All,” and we have your weekly The Bachelorette recap below. On tonight’s episode, JoJo and 18 of the most memorable men from the season return to discuss their experiences, including the controversial Chad.

On the last episode, a startling finish to the rose ceremony after the hometown dates left three men to be swept away for more romantic adventures in the exotic country of Thailand. Did you watch the last episode? If you missed it, we have a full and detailed The Bachelorette recap right here for you.

On tonight’s show as per the ABC synopsis, “it’s an exciting, unpredictable reunion viewers won’t want to miss as the most memorable bachelors from this season – including Alex, Chad, Chase, Christian, Daniel, Derek, Evan, Grant, James Taylor, Luke and Wells – return to confront each other and JoJo one last time on national television to dish the dirt and tell their side of the story.

A first look at the third season of ABC’s highly anticipated hot summer series “Bachelor in Paradise” will be featured, along with a preview of the explosive final days of JoJo’s journey to find love.”

Tonight’s episode of The Bachelorette Men Tell All Season 12 reunion show kicks off with Chris Harrison taking the stage. Jojo Fetcher is down to the final two guys – Robby Hayes and Jordan Rodgers, the season finale will air next week. Before the reunion show gets started, Chris Harrison shares a crazy and all new promo video for this summer’s season of Bachelor In Paradise. Of course, there are some familiar faces like Jared Haibon, Nick Viall, The Ferguson Twins, Jubilee, and some castoffs from Jojo’s season.

Chris Harrison gets the reunion started and introduces all of the guys, Chad Johnson is backstage, they don’t have him sitting with the other guys. Chris casks the guys about night one, and meeting Jojo. Luke raves that his and Jojo’s chemistry kicked off on night one, and he never expected to actually find someone like her on the show.

They share a clip of some of the craziest moments of the season, most of them involve Chad and Alex. There is a part of the promo that Alex calls out Chad an “insecure bitch.” After the clip, Nick B stands up and says what a lot of people have been thinking – Alex was manipulative and he was constantly antagonizing Chad. Daniel agrees with Nick and says that the guys were more worried about taking down Chad than they were about dating Jojo Fletcher.

It’s finally time for Chad Johnson to take the stage – security escorts him out, and he takes a seat with Chris Harrison. Chris shares a clip of Chad’s wild ride on The Bachelorette before he was eliminated. Chad explains that it was like living in a frat – and he literally couldn’t walk through the house without hearing one of the guys talking about him. Chad says he was the only honest guy, all of the guys on the show were fake and just trying to become famous.

Chad reveals that he has been dating Robby’s ex Hope and Grant’s ex Jen since he got kicked off The Bachelor. Chad says that he felt bad because Hope and Jen were both dumped by their boyfriends to be on the show. Nick jumps up out of his chair and threatens Chad and says that he is sick of his “egotistical bullshit” and he will fight Chad any day and anywhere. Chad laughs at his threats and says that Nick is just trying to get air time.Talk turns to Derek’s beef with Chad, they were roommates, but Derek asked to be placed in a different room. Derek still insists that he was scared for his safety sleeping in the same room. Derek and Chad start bickering back and forth for a good five minutes. They accomplish nothing…Chad

Talk turns to Derek’s beef with Chad, they were roommates, but Derek asked to be placed in a different room. Derek still insists that he was scared for his safety sleeping in the same room. Derek and Chad start bickering back and forth for a good five minutes. They accomplish nothing…Chad does however, point out that Derek’s pocket square doesn’t match his jacket.

Chad begins ranting about Jordan Rodgers next. Jordan is in the final two, so he actually isn’t even there to defend himself. According to Chad, Jordan only joined the show to be famous, and that has been his life long dream. Chad also says that the other final two guy, Robby Hayes,’ supposedly threatened his ex-girlfriend Hope and told her not to talk to the media.

Now it’s time to talk about the major drama of the season – when Chad accused Evan of pushing him on a date, and then punched the wall. Chris Harrison plays the clip back in slow motion, the audience agrees with Chad…Evan definitely pushed him. Wells interrupts, he says that he feels bad for the guys on the show, because the world never got to see how awesome they all were because they were all worried about Chad.

Chris asks Chad if there is anything on the show that he regrets. Chad says he doesn’t regret anything, if anyone was in his shoes, and was harassed by 20 guys in a house every day, they would have reacted the same way. Chris asks Chad what his mother would have thought of the show if she was still alive, Chad says that his mom would have loved it and she would have been cracking up the whole time.

Enough with the Chad drama, fan favorite Luke Pell takes the stage next to discuss his shocking exit that no one saw coming…not even Luke. Luke explains that he wished he had told Jojo that he loved her earlier, it would have made a difference. He confesses that he felt a lot of pain that night, but it’s all worth it now, if Jojo is truly happy with the guy that she chose. He wishes he had been more expressive and direct with Jojo though. Luke is a little nervous about seeing Jojo tonight, he hasn’t seen her since she dumped him on the show.

Jojo’s most recent ex, Chase McNary, takes the stage next. He was shockingly dumped by Jojo fletcher in the middle of their Fantasy Suite date. Chase took a chance and told The Bachelorette that he loved her, and in return Jojo dumped him. Chase tells Chris Harrison that was the first time he told a girl that he loved her first, and he wants to confront Jojo and find out why she would go on an overnight date with him if she planned on just sending him home. Season 12 Bachelorette Jojo Fletcher finally gets to come out and speak her peace. Jojo explains that when she took on the job, she never expected to fall in love with any of the guys, and it was really hard for her to break up with someone and send them home every week. Chris Harrison wants to talk about her break-up with Luke Pell. Jojo says that something happened on their last date, and it just didn’t feel right, or how she expected it to be. She admits that when she said goodbye, she thought she might make a mistake.

Season 12 Bachelorette Jojo Fletcher finally gets to come out and speak her peace. Jojo explains that when she took on the job, she never expected to fall in love with any of the guys, and it was really hard for her to break up with someone and send them home every week. Chris Harrison wants to talk about her break-up with Luke Pell. Jojo says that something happened on their last date, and it just didn’t feel right, or how she expected it to be. She admits that when she said goodbye, she thought she might make a mistake.

Luke interrupts and asks Jojo if he had told her that he loved her sooner, would it have made a difference? Jojo says that it’s hard to tell what would have happened, but she sent him home because on their last date, he kept saying that “his heart was her’s” but he never actually said that he loved her. Luke tells Jojo that he still loves her, and he wants her to be happy, he thanks her for teaching him how to love again.

Now it’s Chase’s turn to get to confront Jojo. He just wants to know why she took him on an overnight date, if he was going home. She explains that she never knew he was going home until that moment. But, when he said he loved her, she knew she didn’t want to hurt him, and if they spent the night together – then it would have hurt him even more, when she sent him home.

Chad interrupts, he wants to talk to Jojo. He says it was great to meet her, and then he goes in to a rant about her final two guys. Chad tells Jojo that Robby is a liar and a cheater, and he dumped Hope to be on the show. And, Jordan is a fraud and is using her, and his own brother won’t even speak to him. Jojo wants to go off on Chad, but she says that she is just going to ignore him, because that’s what he wants it attention.

Before the Men Tell All comes to an end, some of the guys get to speak their peace. Vinny brings up when he was eliminated in Uruguay, Vinny’s mom is in the audience and she stands up and interrupts. She tells Jojo that she screwed up, she never should have let Vinny go, and he never would have broke her heart. Jojo says that Vinny was his best friend in the house, and their relationship was never really more than friends. Vinny’s mom takes a seat, but not before she shouts to the cameras that Vinny is still single.
The reunion episode ends with a hilarious blooper reel of Jojo and the guys and some of their craziest moment of the season.