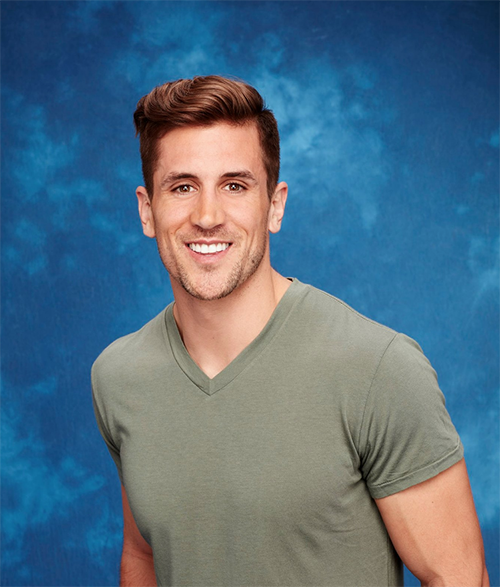 ABC has released the names and bios of the 26 men who viewers will watch meet and woo Bachelorette 2016 JoJo Fletcher. The new season begins on Monday, May 22. Among the gentlemen vying for JoJo’s heart are Brandon Howell, a 28-year-old hipster from Los Angeles; Daniel Maguire, a 31-year-old male model from Vancouver, British Columbia; Evan Bass, a 33-year-old erectile dysfunction expert from Nashville; and James S., a 27-year-old Bachelor superfan from Phoenix.

Jordan Rodgers (PICTURED ABOVE), 27, from California lists his profession as former pro football quarterback and seems to be the favorite to win JoJo’s heart. Jordan is the brother of Green Bay Packers quarterback Aaron Rodgers. JoJo has some high standards to live up to – actress Olivia Munn is Aaron’s girlfriend.

Sal DeJulio, 27, from Fort Lauderdale is an operations manager for a home building company. William ‘Will’ Haduch, 29, from Jersey City, New Jersey is a civil for a construction company.

Then there’s Vincent “Vinny” Ventier, 28, a barber from Delray Beach, Florida; and Peter Medina, 26, a staffing agency manager from Chicago. Luke Pell, 31, is a war veteran from Burnet, Texas.

Chad Thedford, 26, from Tulsa, Oklahoma is luxury real estate agent. It might be difficult for JoJo Fletcher to get over the fact that this bachelor has same first name as her ex-boyfriend Chad Rookstool.

There are two Nashville bachelors on the list. Wells Adams, 31, is a radio show host/DJ and James F. 26 who is a boxing club owner. James Taylor, 29, from Katy, Texas is a singer/songwriter. How appropriate and we’re sure this James will have a story to tell about his name.

There’s another Canadian on the list. Jonathan Hamilton, 29, from Vancouver, British Columbia, is a technical sales rep. There is some buzz that Jonathan has a BA in History and then studied mechanical engineering. This poor guy could be too boring for JoJo.

More guys with the same first name! Nick Benevenutti, 33, is an electrical engineer from Fort Lauderdale and Nick S., 26, a software salesman from San Francisco. How is JoJo ever going to keep all these gentleman with the same name straight? It could get awkward at Rose Ceremonies if she calls the wrong last initial, right?

Coley Knust, 27, is a real estate consultant from Chicago. Grant Kemp, 28, is a firefighter and reportedly does some modeling on the side. Christian Bishop, 26, from Los Angeles is a telecom consultant. We hear he is also a personal trainer.

Last but we hope not least is Alex, 26, a Marine from Oceanside, California and Ali, 27, a bartender from Santa Monica. Derek, 29, is a commercial banker from Fort Lauderdale and Jake, 26, a landscape architect from Playa Vista, California. There are lots of men from California, Florida and Texas on season 12 of The Bachelorette.

All these bachelors want to be the winner of Bachelorette season 12. Who will win JoJo Fletcher’s heart? Tune in Monday, May 22 as season 12 of The Bachelorette begins.