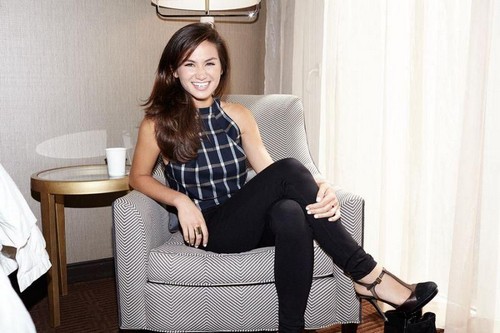 US Weekly reported that Caila was spotted in her hometown, being followed around by a camera crew, filming footage for her stint as the next Bachelorette.

It’s really not a shock that Caila Quinn was chosen as the next Bachelorette, she was one of the only semi-sane women on Ben Higgins’ season of The Bachelor, and is as close as they are ever going to come to a “diverse” Bachelorette.

ABC promised fans this year there would be more diverse Bachelorette – after fans’ outcries over a lack of diversity. It became pretty clear this was the route they were taking on Caila’s hometown visit when they made a huge deal about her mother being Filipino.

ABC has not made an official announcement that Caila Quinn is The Bachelorette – but already spoilers are rolling in, and we can tell you one of the guys that she will be dating this Spring. According to The Bachelorette 2016 spoilers, Caila will be dating former football player Jordan Rodgers. Jordan’s brother Aaron Rodgers is currently the quarterback for the Green Bay Packers.

Caila’s new suiter played for the BC Lions (in the Canadian Football League), and also spent some time playing for the Tampa Bay Buccaneers and Miami Dolphins before he announced his retirement in May 2015. Former athletes tend to do well on the series, look how far Josh Murray got, but in the end his engagement to Andi Dorfman still turned out to be a disaster.

So Bachelorette fans, do you think Caila Quinn will make a good Bachelorette? Are you excited for her season? Could former football player Jordan Rodgers wind up going all the way and getting the final rose? Let us know what you think in the comments below, and don’t forget to check CDL for all of your Bachelor and Bachelorette spoilers and news.