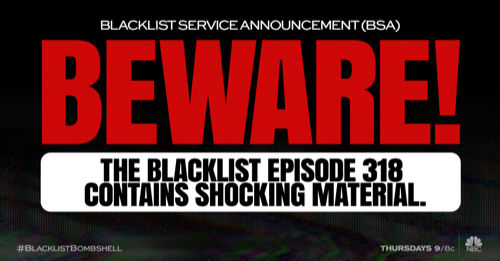 Tonight on NBC their criminal drama, The Blacklist starring James Spader continues with an all new Thursday April 14, season 3 episode 18 called, “Mr. Solomon: Conclusion.” On tonight’s episode, conclusion. A team member falls into grave danger due to a tragedy, leading the task force to rely on Red (James Spader) and his unorthodox methods.

On the last episode part 1 of 2. Thieves targeted a tactical nuclear weapon, so the team raced to stop them and prevent a nuclear disaster. Meanwhile, a decision could alter Tom and Liz’s relationship forever. Did you watch the last episode? If you missed it, we have a full and detailed recap right here for you.

On tonight’s episode as per the NBC’s synopsis, “conclusion. A team member falls into grave danger due to a tragedy, leading the task force to rely on Red and his unorthodox methods. Meanwhile, an unforeseen complication impacts Tom and Liz.”

Tonight’s episode of The Blacklist kicks off where we left off last week, Elizabeth and Tom are making their getaway from the church. Elizabeth gets emotional – she is certain that her mother is the one that hired Solomon to come kidnap her, because that is the only way that she could get her daughter back from Red.

Meanwhile at the church, Solomon gets word that Elizabeth and Tom have escaped. He has a partner that is tracking Elizabeth via satellite on the highway. Solomon and his men leave the church and chase after Elizabeth. Elizabeth and Tom wind up in a high speed chase, baby bump and all. Elizabeth tries to shoot out Solomon’s tires but she is unsuccessful. Tom crashes their wedding get away car in to a truck and they run in to a nursing home to hide. Elizabeth isn’t doing too good, she’s bleeding heavily and complaining that something is wrong with the baby.

To rushes Elizabeth to a nearby hospital – the bleeding stops and the on-call doctor seems to think that the baby will be okay. They are waiting for more tests when Red calls Elizabeth and tells her that Solomon is only a few minutes away. Red convinces her to leave the hospital with Kaplan and go to a make-shift hospital that has been set up for her at an old nightclub.

On route to the hospital Liz’s water breaks. Red arrives and learns that Elizabeth is in trouble, the placenta broke and her baby is not getting enough oxygen, the heart rate is dropping. They are going to have to perform an emergency c-section in the middle of the make-shift hospital or else the baby and Liz could die.

Meanwhile, Harold is working hard to try and figure out who hired the men at the church to try and kidnap Elizabeth. He ID’s some of the dead men and sends someone out to talk to their spouses to see if they can get any information.

Nik is the doctor on call at the makeshift hospital…awkward. While he is giving Liz and epidural, Red is bickering with Kaplan and Dembe. Elizabeth is a hot mess, Tom turns on the disco-ball, lights, and some music to try and keep her calm while Nik cuts her abdomen open. Nik pulls the baby out, but it’s not breathing. Nik and the nurses rush around the baby and clean out her lugs – after a few painfully long minutes the baby starts crying. Liz and Tom are the proud parents of a healthy baby girl. Red watches from outside, and gets a little teary eyed.

Red congratulates Elizabeth and Tom – and asks Liz if he can hold the baby. Liz freaks out, she tells Red to get out – she doesn’t want him anywhere near her daughter. Kaplan tells Red to wait outside – she will try to talk to Liz.

Aram manages to get an address for one of the men that stormed the church, he left behind his earpiece. Ressler and Samar rush to the address – the house is empty but they find something bizarre in the basement. An entire fiber optics set-up that was intercepting messages across the entire East Coast.

Back at the night-club, Liz is in trouble. She goes in to cardiac arrest. Amniotic fluid leaked in to her blood stream and she can’t breathe. It’s causing her lungs to swell, Nik tells Red that they are going to have to put her in to a medically induced coma so that they can control her breathing or else she is going to die. Red and Liz have a moment before the meds completely knock her out.

After Liz is put under the coma, Nik says that he is losing her. They have no choice, they are going to have to take her to the hospital. Red forces Tom to stay behind with the baby and make sure nothing happens to her.

In the ambulance, Elizabeth flatlines – Nik tries to give her CPR for what seems like forever. Meanwhile, Red is on the verge of a panic attack. He begs Elizabeth’s lifeless body not to go. Solomon and his men are getting closer… they have the ambulance trapped under a bridge.

Ressler, Samar, and the rest of the FBI arrive to help Red’s men fight off Solomon. After the shootout is over – Ressler and Dembe open the back of the ambulance. Red is hovering over Liz’s body. Nik tells Ressler that he had to call it and Elizabeth is dead.

The police arrive, Kaplan tries to get Red to get out of the back of the ambulance. He cries and kisses Liz’s hand and kisses her forehead. Ressler watches as Red says an emotional goodbye to Liz’s dead body. Ressler finally leads Red away and puts him in Dembe’s car – Red faints and Dembe has to help him.

Back at the FBI office, Aram and Harold get word that Liz is dead.

Kaplan watches over two medics as they load Liz’s dead body in to a body bag and then in to the back of a van. Red and Dembe head back to the nightclub where Tom is trying to calm the crying baby. Tom blames himself, he should have been with Elizabeth.

He needs to know if Elizabeth was in pain – Red reassures him that she never woke up. Tom cries over the baby, he can’t raise his daughter by himself. Tom finally lets Red hold the baby – Tom says that her name is Agnes.