BY Amanda Austin on May 5, 2016 | Comments: one comment
Related : Recap, Television, The Blacklist, TV 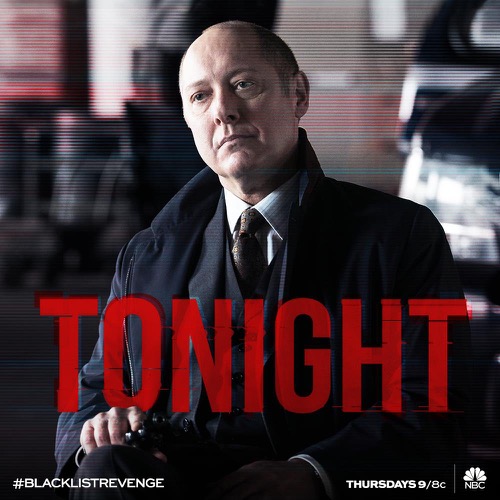 On the last episode assailants were pursued after a loss devastated the task force, with focus turned to a mysterious group using a global satellite network. Did you watch the last episode? If you missed it, we have a full and detailed recap right here for you.

On tonight’s episode as per the NBC’s synopsis, “Red connects an elegant yet dangerous woman to recent tragic events, leading the task force into a perilous cat-and-mouse game.”

Tonight’s episode of The Blacklist kicks off with Susan Hargrave meeting with a client – she is trying to get him to sign a contract, and pay for her company’s services. One of her minions knocks on the door and interrupts, he says it is an emergency.

Susan Hargrave heads to a warehouse where men in protective gear were guarding cases of thousands of gun. Someone slaughtered all of her men – and didn’t steal a single one of the guns. There’s a not tapes to one of the dead bodies. It says, “We should talk. Call my extension.” And, it is signed “R.”

At the FBI office, Aram briefs the team on his late night visit from Red – Red told him the woman they were looking for is named Susan Hargrave. According to Harold, Hargrave and her husband own a security company called “Halycon Aegis.” But, they aren’t your average security company, they take contracts from governments to do messy jobs that no one wants to touch – like negotiation with terrorists, or deactivating nuclear bombs. And, most likely someone hired them to kidnap Elizabeth.

The FBI team is not thrilled about Harold inviting Tom Keen to work this case with them. He wants Tom and Aram to get close to Amanda Bigelow – she is the assistant of the man that Susan Hargrave tried to kidnap. Harold explains that everyone needs to be on their toes – because Panabaker is protecting Halycon and Scottie.

Red is working his own angle. He visits Laurel, he tells her that she owes him one after the Kabul incident. He wants Solomon. Red tells Laurel to call Halcyon and tell them that she wants to hire Solomon for a job.

Laurel follows Red’s orders – she sets up a meeting with Halcyon, and Bradley comes for a sitdown. Red crashes Laurel and Bradley’s meeting, he tells Bradley that he needs to send Scottie a message and get her attention, because she ignored the first one (killing her guards at the gun warehouse). Brad says he would be happy to pass on the message – then Red pulls out his gun and shoots and kills him. Scottie gets word that Bradley is dead – she seems unfazed, and still has no interest in meeting with Red.

Harold tries to get a warrant for Susan’s arrest, but it is denied. The government is definitely protecting her. Meanwhile, Aram is tracking the last known phone that Brad called before he was killed. Samar and Ressler head out on the field to find the cell phone. They get a photo of the guy the phone belongs to – his name is Samuel Rand, he’s Vice President of an oil and gas company.

Meanwhile, Red is already two steps ahead of the FBI. He heads to Samuel Rand’s house, and lies and says his name is Lester – he tells Samuel that he is interested in buying one of his house. Red charms Samuel’s wife and gets invited in to the house for snacks. Red pulls out his gun and demands to know why Samuel hired Halcyon. His wife Cynthia starts rambling and says that a rival oil company has been selling oil to terrorists.

Tom Keen is working hard to get to Amanda Bigelow’s laptop. Stadler, her boss, seems to have vanished since they chatted with him about Susan Hargrave. Aram gives Tom a flashdrive to plug in to Amanda’s laptop so they can get info on Stadler. Tom heads to Amanda’s house for drinks – he flirts with her and intentionally spills his wine when she kisses him. While Amanda is changing her clothes – Tom plugs the flashdrive in to her computer. Once he is done getting the information off her computer, he makes up an excuse and rushes out.

Red meets with Harold and fills him in on his meeting with Samuel, he reveals that Samuel hired Halcyon to attack a rival oil company at the Port of Amsterdam. Harold agrees to get a team to the docks, when Halcyon shows up – they will grab them. The SWAT team spots Rowan, who is carrying a bomb and planning on blowing up the docks. One of the SWAT team members picks up the bomb and tries to put it in a container to minimize the explosion. While they are dealing with the bomb, Rowan and the Halcyon team get away.

After the FBI and SWAT screw up Susan Hargrave’s oil shipment at the docks in Amsterdam, she finally calls Red. He says he wants to meet with her in person to discuss Elizabeth’s death and who hired them to kidnap her. Scottie sets up a meeting with him at the airport.

Meanwhile, back at the FBI, Tom and Aram are listening in on Stadler’s calls – thanks to the flashdrive he plodded in to Amanda’s laptop. Stadler gets a phone call from Susan Hargrave. She apologizes for botching Liz’s kidnapping – apparently Stadler’s boss is the one that hired her and wanted Liz alive. Then, Susan says she has something just as good, she offers to kill Raymond Reddington for Stadler and his boss and says she has a meeting with him later.

Tom calls Red, he is outside the airport and about to meet with Susan Hargrave. Tom calls Red and warns him not to go in the airport, it’s a trap, Susan is going there to kill Red. He thanks Tom for the information, and then he heads in to the airport anyway.

Susan Hargrave is sitting in the airport lounge sipping a drink and waiting for Red. Right before he arrives, she calls 911 and tells the cops that she just saw him off a Wanted Poster. Two airport police arrest Red, and take him down the stairs where there aren’t any cameras. One of the cops are on Susan’s payroll – and they are taking Red to her. Red is two steps ahead of Susan though. Dembe is waiting for them, he grabs the cop’s gun, and he and tells him to lead them to Susan.

Red arrives at the garage where Scottie is waiting for him – with his armed men. Dembe kills Susan’s men and takes her gun. Red cuts to the chase and demands to know who hired her to go after Elizabeth Keen. Susan reminds Red that she didn’t kill Elizabeth – it was his fault because she wasn’t at a proper hospital. Red shoots Susan in the arm. She finally gives Red a name and says that she was hired by Alexander Kirk.

It turns out Red is friends with Susan’s husband Howard – Red taunts her and says that her Halcyon company has gone to hell, and Howard never would have taken a job for Alexander Kirk. Susan laughs and says she is taking over the company and she took the job from Alexander Kirk, her husband didn’t have anything to do with it. Susan points out that Kirk also wanted her to kill Red, but she turned down that job. Red isn’t going to kill Susan though, he says they are “getting in to bed together” because now they have a mutual enemy … Alexander Kirk.