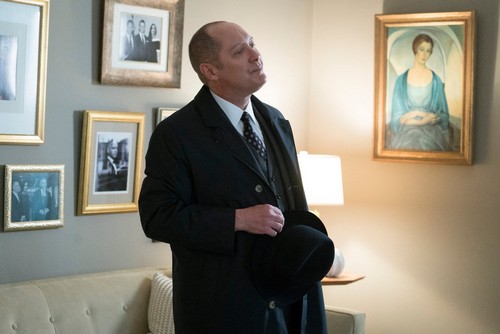 The Blacklist Season 3 spoilers tease that the two part finale, appropriately titled “Alexander Kirk” will kick off on Thursday May 12, and the finale episode will air on Thursday May 19. With Season 3 winding down, there is one major question on Blacklist fans’ minds, will Megan Boone return as Elizabeth Keen alive before the season is over?

Elizabeth Keen’s death last month shocked Blacklist fans, especially since there had been no news yet of Megan Boone’s exit. Even after Elizabeth’s death, NBC was mum on the actress’s status on the primetime drama. However, her co-stars James Spader and Ryan Eggold did release statements in lieu of her character’s death.

Was Elizabeth Keen’s death the real deal, or just a creative way to get Megan Boone off the canvas for maternity leave (she gave birth to her baby girl in April)?

The Blacklist spoilers for Season 3 Episode 22 tease that Raymond Reddington (James Spader), with the help of Susan Hargrave (Famke Jannsen) and the FBI task force will be closing in on Alexander Kirk, a nemesis of Red’s. Red wants revenge, he blames Kirk for Elizabeth’s death, since Kirk is the one who hired Hargrave and Solomon to kidnap Elizabeth.

But, when Red finally tracks down Alexander Kirk, will he learn that Elizabeth Keen is still alive? Is it possible that Kirk hired Hargrave’s agency as a red herring, and he secretly faked Elizabeth’s death behind their back to get her away from Red? If Alexander Kirk is anything like his old pal Red, then he definitely has access to modern medicine that would make it possible to make Liz appear dead – even if she wasn’t.

And, there is a good chance he could have bought off some of Red’s employees, like Dr. Nik and Mr. Kaplan.

The Blacklist spoilers tease that there may be some truth to the crazy fan theories that Elizabeth Keen is still alive. Blacklist fans went in to a frenzy this month on Twitter when eye witnesses claimed they saw Megan Boone on set of the Blacklist, the NBC drama is most likely already filming for their season 4 return in the Fall.

Or possibly Elizabeth returned after the birth of her daughter to film a tidbit for the Season 3 finale, or a The Blacklist Season 4 promo.

The fact that Megan Boone hasn’t spoken out about her status at The Blacklist only seems to further fuel rumors that Elizabeth Keen is not dead. You would think that by now Boone would have sat down with somebody and discussed her time on the show, her reasons for exiting, or her future plans. But, the actress has kept her lips sealed.

So Blacklist fans, do you think it is possible that Alexander Kirk is holding Liz hostage – and she is still very much alive? Did he pull an epic death hoax and even trick Raymond Reddington? Or could Elizabeth Keen have just been on set filming a few flashbacks?

Let us know what you think in the comments below and don’t forget to check CDL for all of your Blacklist spoilers and recaps.