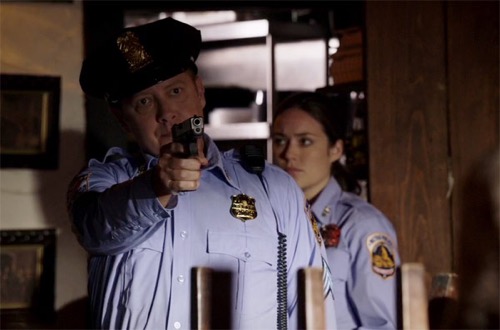 The Season 3 finale ended on such a crazy cliffhanger, even for The Blacklist. We learned that Elizabeth Keen (Megan Boone) was very much alive – then before we could even celebrate that super cute reunion between her and Tom Keen (Ryan Eggold) and baby Agnes, she was kidnapped by Red’s nemesis Alexander Kirk – who revealed in the final seconds of the show that he is Liz’s real father.

Megan Boone recently sat down with Entertainment Weekly for an exclusive interview, and to share some Blacklist Season 4 spoilers. Boone revealed while chatting with EW that just because Alexander Kirk is her father, doesn’t necessarily mean that he won’t harm her. After all, there is a reason Red (James Spader) went to such great lengths to keep her hidden from Kirk.

Season 4 spoilers indicate that when The Blacklist premieres in Fall 2016 that Raymond Reddington will be joining forces with the FBI again, only this time to rescue Liz and her family. While it may have almost seemed that Liz was going to get a happily ever after – she was reunited with her husband, her daughter, and a father she didn’t know she had, all in one day, don’t count on it.

The Blacklist 2016 spoilers for Season 4 reveal that Tom Keen will be ushered off the canvas early on – he’ll be leaving town to work with Scottie Hargrave (Famke Janssen). Eggold and Janssen have scored their own spinoff drama called Blacklist Redemption, which is expected to premiere in the Spring of 2017.

Executive Producer Jon Eisendrath also spoke with Entertainment Weekly, and he made it very clear that The Blacklist is not a love story, nobody wants to see Tom and Liz live happily ever after and change diapers.

Interestingly, there is a very twisted Blacklist rumor floating around. Several Blacklist social media fan pages seem to think that the writers might be setting up the stage for a Liz and Red romance.

Tom Keen will be out of the picture, and on an entirely different show, and now that Alexander Kirk has arrived, we know that Liz is not Red’s daughter.

Regardless of DNA, we can’t really wrap our minds around anything romantic happening between Liz and Red – but hey stranger things have happened on the show.

So Blacklist fans, are you as excited as we are for the Season 4 premiere? Do you think that Alexander Kirk has bad intentions towards Liz, or does he just want to know his daughter?

And, what do you think about those weird Red and Liz romance rumors? Share your thoughts in the comments below and don’t forget to check CDL for all of you’re the Blacklist 2016 spoilers and news.