The Bold and the Beautiful (B&B) Spoilers: Ivy Rescues Liam from Quinn – Returns From Australia During February Sweeps? 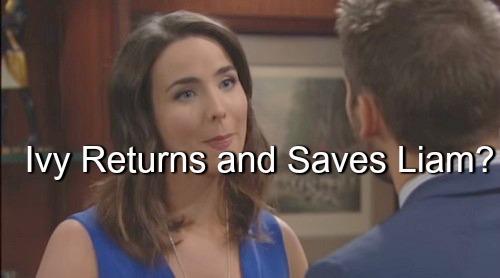 “The Bold and The Beautiful” (B&B) spoilers hint that Quinn Fuller (Rena Sofer) will be able to keep Liam Spencer (Scott Clifton) from the truth for a while longer, but it’s inevitable that someone will come looking for him – and that person may be lovelorn Ivy Forrester (Ashleigh Brewer).

We know Ivy is coming back for February sweeps and she’s already called Quinn once. When Ivy hits town and can’t find Liam anywhere and he’s not answering his phone, will the sassy Aussie start up a manhunt? And will that lead her to Quinn’s door in Topanga Canyon?

We know that Ivy can be annoyingly persistent so it’s likely that she will be the one person that won’t buy the story that Liam has gone walkabout and no can find him. Will it by Ivy that pries Liam loose of Quinn’s clutches and tells him that Quinn is not his wife but is his arch-enemy?

Will Ivy be the one to jog Liam’s memory? B&B spoilers have hinted that Liam will recover his memories in time to show up to Wyatt Spencer (Darin Brooks) and Steffy Forrester’s (Jacqueline MacInnes Wood) quickie wedding. Will it be Ivy that brings him there?

B&B fans have been tired of the Ivy-Liam-Steffy-Wyatt love quadrangle for quite some time, so let’s hope that even if Ivy does save Liam from Quinn, that it won’t relaunch more of this overdone storyline. What would be far more interesting is if Liam can’t get over Quinn.

By the time Ivy gets to Liam, Quinn will have had him alone for days and she’s clearly falling for him. Liam may be initially horrified that he was intimate with Quinn, but you have to admit, she’s hot and they have sizzling chemistry.

Plus, Liam may feel utterly betrayed that Steffy believed he would run off like that and it was Ivy that went looking for him rather than his fiancée. Liam may think Steffy was too busy getting cozy with his brother to care about what happened to him – and he’s not wrong about that.

Steffy moved on to making out with Wyatt at light speed after the misunderstanding with Liam. Could this be the end of Liam and Steffy? And will Liam be unable to forget his time with Quinn? Could this turn into a legitimate romance between the May-December couple?

If so, it will be a breath of fresh air since the writers are once again trotting out the Brooke-Bill-Katie triangle that has been done to death. Plus with Liam and Quinn together, that leaves Wyatt and Steffy a chance to make it work and makes Ivy available for a new love.

Deacon Sharpe (Sean Kanan) is back in town – maybe he’d like to give Ivy a whirl… B&B has already set up other May-December couple Caroline Spencer (Linsey Godfrey) and Ridge Forrester (Thorsten Kaye), so why not make it a trend and ship “Quinian” and “Deavy” both?

That would make B&B far more interesting than it has been in recent months. What do you think B&B fans? Do you think it will be Ivy that rescues Liam? And what does that mean for Quinn? Will she be locked up or back in a lip lock with her inappropriate boy toy?