The Bold and the Beautiful (B&B) Spoilers: Liam and Quinn Make Love – ‘Adam and Eve’s’ Forbidden Hookup Raises the Stakes 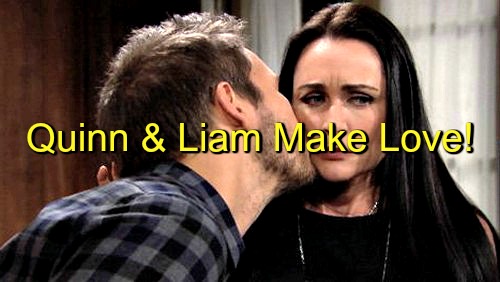 “The Bold and the Beautiful” spoilers reveal that Quinn (Rena Sofer) and Liam (Scott Clifton) will begin to grow closer than ever. Of course, Quinn is keeping Liam in the dark about their true identities. Liam still thinks he’s “Adam” and he believes “Eve” is his beloved wife. Like it or not, they’ll soon consummate this “marriage.”

Quinn has been opening up about her past and it’s bringing them together. In fact, Quinn mentioned that she’d never told anyone else about the tragic memories of her childhood. Liam doesn’t know much of anything right now, but he trusts Quinn and feels a connection to her. They’ve been making out frequently, but they’re about to take things to the next level.

“The Bold and the Beautiful” spoilers tease that Quinn and Liam will have a hot hookup. This sex session really raises the stakes for Quinn. It was bad enough that Quinn put Liam’s life in jeopardy by refusing to take him to the hospital. Now Quinn has misled Liam to the point that he wants to make love.

Liam will start to feel like this situation is becoming increasingly complicated. His head will tell him one thing and his heart will tell him another. Nevertheless, Liam has no reason to suspect that Quinn has been lying to him. It appears Liam will have to dig deep if he hopes to remember anything about his life.

Eventually, Liam’s memories will return and Quinn will be left to face the consequences of her actions. It seems likely that Liam will lash out in rage once he figures out that Quinn has been deceiving him. Still, we shouldn’t jump to conclusions about how all of this will go down.

Most B&B viewers thought Rick (Jacob Young) was going to go off the rails when he learned Maya’s (Karla Mosley) secret. Rick’s reaction actually turned out to be quite tame. Although that was a very different scenario, it just goes to show that soap characters often behave in unpredictable ways. It’s possible that some of Liam’s feelings for Quinn will linger.

If nothing else, Liam might have a new understanding of Quinn and what’s going on in her twisted mind. Then again, Liam could be furious and want Quinn locked up for what she’s done. It should be interesting to see how this storyline plays out. Whatever happens, it’s clear that Liam and Quinn are going to have a lot to deal with. Stick with “The Bold and the Beautiful” for updates on this bizarre love story.

So B&B fans, what do you think about the news that Liam and Quinn will hook up? Are you surprised that they’re going that far? Will Liam be horrified when everything clicks or will he have a new appreciation for Quinn? Voice your opinion in the comments below and don’t forget to check CDL often for the latest “Bold and the Beautiful” spoilers, updates and news.