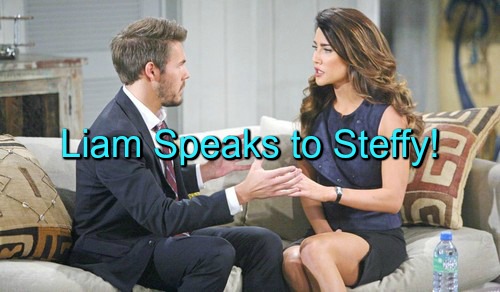 “The Bold and the Beautiful” spoilers tease that Quinn’s (Rena Sofer) scheme will be hanging by a thread. Quinn has been doing everything she can to give Wyatt (Darin Brooks) time to win Steffy (Jacqueline MacInnes Wood) over. It also looks like Quinn has found love with Liam (Scott Clifton) in the process.

Of course, their “marriage” is based entirely on lies. Sooner or later, this plot is going to fall apart. “The Bold and the Beautiful” spoilers indicate that Steffy will decide to give Liam a call. Despite the message Quinn delivered, Steffy just can’t let this go. Liam shouted that Steffy should never call his number again, but when has Steffy ever taken Liam’s advice?

In order for Steffy to have closure, she needs to actually speak with Liam. Steffy doesn’t know where Liam is and she doesn’t understand why he’s pushing her away. Steffy will pick up the phone to demand some answers.

Here’s where Quinn will drop the ball. B&B spoilers say Liam will manage to answer the phone when Steffy calls. If Steffy starts ranting, everything could come rushing back. Even Steffy’s voice could be a trigger. Quinn has hidden Liam’s old life by convincing him that he’s her husband, Adam. Since they’re at a secluded cabin, Liam has been kept away from anything and anyone who might jog his memory.

If Quinn walks in, she might try to snatch the phone and give Liam a bogus excuse. It’s possible that Quinn could pretend Steffy was a stalker or someone that Liam cheated with. It wouldn’t be too hard to come up with something. Quinn is a creative gal and Liam is pretty gullible in his current state.

Then again, this could be the beginning of the end for Quinn. If Steffy is able to blurt out Liam’s real name, he could suspect that something’s up. After all, Liam caught Quinn saying it once before. Quinn fibbed and claimed she’d said “Adam,” but he may not buy that if Steffy says it as well.

Regardless of happens on the phone, the jig will soon be up for Quinn. This storyline seems to be winding down. We’ll eventually see the aftermath of Quinn’s devious plan. Stick with “The Bold and the Beautiful” for updates on the chaos to come.

So B&B fans, what do you think about the news that Liam will take a phone call from Steffy? Will Quinn’s scheme blow up or will she counter with another quick fix? Voice your opinion in the comments below and don’t forget to check CDL often for the latest “Bold and the Beautiful” spoilers, updates and news.