The Bold and the Beautiful (B&B) Spoilers: Bill Teams Up with Brooke to Blackmail Ridge, Cheating Begins Behind Katie’s Back? 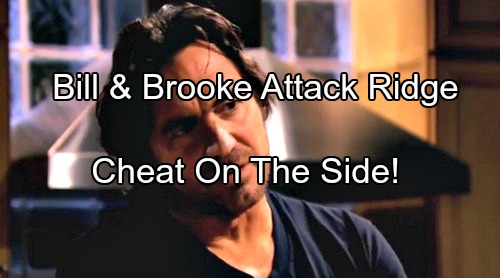 “The Bold and the Beautiful” (B&B) spoilers tease that on this week’s episodes Bill (Don Diamont) could gain an ally in his fight to bring down Ridge (Thorsten Kaye). Unfortunately, it won’t be Katie (Heather Tom). Once Bill learns Ridge’s secret, Katie will try to steer him away from his vindictive path. She’ll know this is a disaster waiting to happen.

Katie’s objections may not stop Bill from going after his goal. When Bill wanted to run the news story on Maya’s (Karla Mosley) secret, Katie insisted it wasn’t right. Ultimately, Bill didn’t care. He saw his opportunity to make a splash and he took it.

We’ll likely see history repeat itself as Bill continues his Ridge takedown efforts. However, Bill probably can’t pull this off alone. He’ll need some help and it could come from an intriguing source.

“The Bold and the Beautiful” spoilers indicate that former flames will team up to carry out a blackmail plot. Could the exes be Bill and Brooke (Katherine Kelly Lang)? We don’t know for sure if they’re the past loves in question, but this would certainly be an interesting way to take the storyline.

B&B viewers know that Ridge opened up to Brooke about his vasectomy and low motility. After Caroline (Linsey Godfrey) got pregnant, Brooke naturally wondered how it was possible. Ridge was able to appease Brooke with his bogus claims, but how will she react when she gets updates on the truth?

Brooke might be angry with Ridge for lying right to her face. She could think that his actions have been despicable. Ridge has done everything he possibly could to keep Douglas’ father away from him. He even tried to send Thomas (Pierson Fode) halfway around the world.

Plus, Ridge has done all of this while on the throne at Forrester Creations. Rick (Jacob Young) clearly feels like he’s suffering because of Ridge. Although Rick is a bit of a whiner, maybe Brooke will begin to see where her son is coming from. She might think Ridge needs to be knocked down a notch or two.

Will Brooke decide to help Bill take over Forrester? Bill isn’t a big fan of Rick, but perhaps there’s some sort of deal that can be made. Regardless, this alliance would give Brooke and Bill a chance to be tempted. Katie will be furious if she finds out Bill went against her wishes AND did it with Brooke by his side. Things could get downright ugly.

Summer preview spoilers have been hinting at a surprising twist, so this might be it. Brooke and Bill as a blackmail team would be unexpected, but also kind of satisfying. It could be fun to watch these two scheming together. The fallout could bring some popcorn-worthy moments as well.

Stick with “The Bold and the Beautiful” to see where the storyline is headed.

So B&B fans, what do you think about the idea of Bill and Brooke teaming up for a blackmail plot? Could they rekindle their spark in the process? Will Katie officially be done with both of them? Voice your opinion in the comments below and don’t forget to check CDL often for the latest “Bold and the Beautiful” spoilers, updates and news.