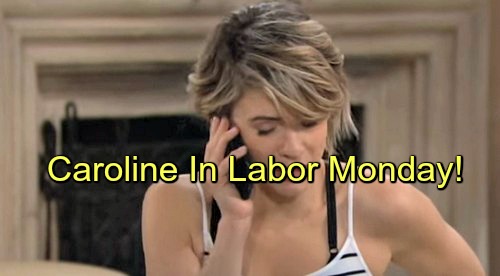 “The Bold and the Beautiful” (B&B) spoilers for Monday’s episodes, March 7, tease that Eric (John McCook) will announce that Ridge (Thorsten Kaye) and Caroline (Linsey Godfrey) are about to have their firstborn child in the Forrester mansion.

Rick (Jacob Young) will comment on the fact that Thomas (Pierson Fode) has been so supportive. He’ll suggest it’s almost like Thomas is the one with a baby on the way – YIKES!

Of course, B&B spoilers viewers know that Thomas is indeed about to be a dad. He just doesn’t know it yet. In the meantime, Thomas will let Caroline know that he doesn’t want her to have any reason not to trust him. That goes for Ridge, too.

Unfortunately, the drama between this father and son is about to heat up once again. Later this week, Ridge and Thomas will have another showdown as the tension bubbles over.

Elsewhere, Caroline will begin to have contractions. The big moment has finally arrived. “The Bold and the Beautiful” spoilers reveal that Caroline will realize she’s going into labor.

Ridge and Caroline will soon welcome a son, but their bliss may be short-lived. The paternity secret poses a serious threat to their happiness. Their family may be torn apart thanks to Rick’s desire for revenge.

Ridge and Rick will have a heated exchange about business, but things will quickly get personal. You can expect some low blows in this argument. The hostility will continue in episodes during the coming weeks as Rick attempts to get payback. Ridge may be sorry he put his foot down with his bitter bro.

Rick will tell Eric that he may not see it now, but one day he’s going to be in for a very rude awakening. It sounds like Rick is convinced that Ridge has a few buried secrets. Ridge will have to juggle the feud with Rick as well as the conflict with Thomas. These quarrels will eventually collide in an epic reveal. Stick with “The Bold and the Beautiful” for updates on the emotional upheaval.

So B&B fans, what do you think about the news that Caroline will go into labor at the mansion? Will Ridge and Caroline’s joy be ripped away once their secret is exposed? Will Ridge regret getting on Rick’s bad side? Voice your opinion in the comments below and don’t forget to check CDL often for the latest “Bold and the Beautiful” spoilers, updates and news.