The Bold and the Beautiful (B&B) Spoilers: Deacon Warns Quinn About Danger of Approaching Liam – Quinn Charges Right In

BY Heather Hughes on April 26, 2016 | Comments: one comment
Related : Soap Opera, Spoiler, Television, The Bold and the Beautiful 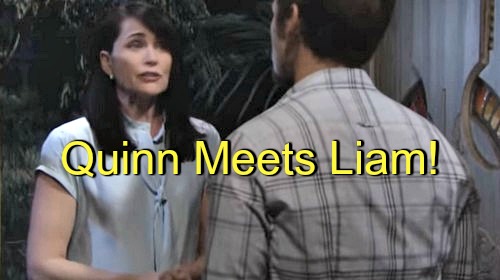 “The Bold and the Beautiful” spoilers for Wednesday, April 27, tease that Deacon (Sean Kanan) will try to talk some sense into Quinn (Rena Sofer). She’ll want a chance to apologize to Liam (Scott Clifton) for everything that happened. Quinn will think she needs to explain why she kidnapped Liam and kept him stashed away for months.

Deacon will feel like that’s a ridiculous idea. He’ll state that Quinn could explain from now until the end of time and it wouldn’t change Liam’s feelings toward her. Furthermore, Quinn is risking her life by approaching the man who despises her.

Nevertheless, Quinn is stubborn and just plain crazy. She’ll head off to face Liam and own up to her mistakes.

Meanwhile, Liam will try to convince Steffy (Jacqueline MacInnes Wood) that nothing should come between them. Steffy may be married to Wyatt (Darin Brooks), but that doesn’t mean her feelings for Liam just went away.

“The Bold and the Beautiful” spoilers say Liam will declare that he loves Steffy and he always will. He’ll gaze in Steffy’s eyes and insist that she loves him, too.

It appears Steffy will leave to mull over what she’s just heard. Liam’s words will make Steffy wonder what her future should look like. Steffy will remember all of the good times she’s shared with Liam over the years. However, Steffy has made some great memories with Wyatt as well. She clearly cares about him.

Of course, Wyatt also has the advantage of being Steffy’s current husband.

Later, Quinn will arrive to have a chat with Liam. B&B spoilers say Liam will be shocked that Quinn would dare to show her face. He’ll be prepared to lash out at Quinn for tearing his life apart. Quinn will admit that she did things she shouldn’t have done and she’s ready to accept the consequences.

It’s doubtful that Liam will buy Quinn’s apology act. Quinn claims she’s changed, but can we really trust her? Liam certainly shouldn’t. It’s far too risky. There could be more trouble ahead. Stick with “The Bold and the Beautiful” for updates on Quinn’s next move.

So B&B fans, what do you think about the news that Deacon will try to stop Quinn from approaching Liam? What does Quinn actually hope to gain from this encounter? Will Liam’s plea make any difference to Steffy?

Is Steffy putting Wyatt’s needs above her own? Voice your opinion in the comments below and don’t forget to check CDL often for the latest “Bold and the Beautiful” spoilers, updates and news.