BY Heather Hughes on May 6, 2016 | Comments: 2 comments
Related : Soap Opera, Spoiler, Television, The Bold and the Beautiful 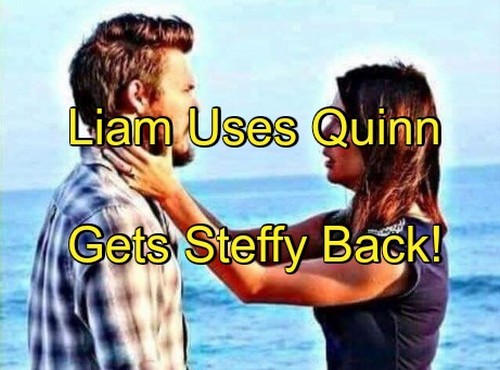 “The Bold and the Beautiful” (B&B) spoilers tease that Quinn (Rena Sofer) will get back to scheming, but it seems Liam (Scott Clifton) could cook up a plan of his own. B&B viewers know that Liam desperately wants to break up Steffy (Jacqueline MacInnes Wood) and Wyatt’s (Darin Brooks) marriage.

It’s the only way Liam can reclaim what he’s lost.

Of course, Liam would enjoy getting revenge on Quinn as well. Will Liam decide to kill two birds with one stone? Liam wasn’t too happy with Quinn during their last meeting, but he might approach the next one with a different mindset. A touch of jealousy can do wonders for a broken relationship on “The Bold and the Beautiful.”

Steffy is trying to honor her commitment to Wyatt, but what might happen if Liam pretends he’s falling for Quinn again? Envy could strike and Steffy may slowly start to drift from her new hubby. From that point, there are a couple of ways this could go.

Liam may pull a “gotcha” moment eventually and show Quinn how it feels to be duped. He might give Quinn the news that it was all a ploy to get Steffy’s attention. Liam could show Quinn what it feels like to be conned through a selfish plot. Quinn may be left to wallow in her own tears and regret.

However, there’s another option to consider. Liam fell for Quinn once and those feelings could return. Since Liam had no memories while he was held captive, he was capable of seeing Quinn through different eyes. He had no preconceived notions about Quinn or her twisted patterns.

After Liam remembered Quinn’s history and learned what she’d done, he immediately turned his back on her. Still, there has to be a part of Liam that cares about Quinn deep down. They truly connected during their isolated time together.

Could Liam’s potential charade turn into a real romance? It’s a possibility. Whether Liam follows through with a revenge scheme or not, it sounds like some great scenes are coming up. B&B is never boring with Quinn around!

Stick with “The Bold and the Beautiful” for updates on what’s in store.

So B&B fans, what do you think about the idea that Liam could use Quinn’s obsession to his advantage? Would that make Steffy jealous? Will Liam deceive Quinn and crush her dreams? Could Liam fall for Quinn again instead?