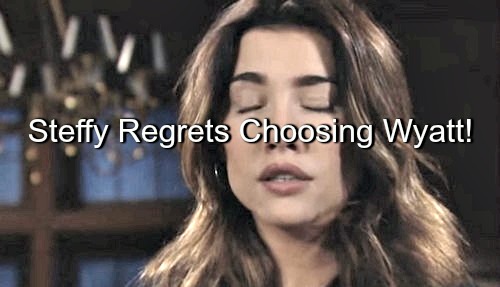 “The Bold and the Beautiful” (B&B) spoilers reveal that on this week’s episodes Steffy (Jacqueline MacInnes Wood) will find herself caught in the middle of Liam (Scott Clifton) and Wyatt’s (Darin Brooks) feud. She won’t want to hurt either one of them, but someone’s going to end up with a broken heart anyway.

That’s just the reality of the situation Quinn (Rena Sofer) forced on all of them.

Steffy is trying to give her marriage a chance, but she’s already showing signs that she won’t be happy in this relationship. If she sticks with Wyatt, Steffy will always have to wonder what she could’ve had with Liam. She’ll be settling for the runner-up and that may not work for Steffy indefinitely.

Still, Steffy might stand by Wyatt for now. That would leave Liam to mope around for a while and it could pave the way for his own runner-up to get back in the mix. “The Bold and the Beautiful” spoilers suggest that Ivy (Ashleigh Brewer) will be headed back to the show eventually.

Could Ivy finally get her wish and secure another shot with Liam? It’s possible. We also can’t forget that there’s a suspected Hope recast coming soon. Maybe Liam won’t have to settle after all. Hope is arguably Liam’s true love. There’s definitely more to explore with this pair.

If Steffy chooses to honor her commitment to Wyatt, Liam might sulk for a bit and then move on. He could get together with Ivy, Hope or even someone new. Regardless, B&B viewers know the drill. Steffy sees her boy toy with another woman and decides she just has to have him back. Will this scenario play out once again?

Of course, there’s no guarantee that Liam would still want Steffy by then. It would probably depend on Liam’s next love interest. If Liam were to reunite with Ivy, he’d likely come running the second Steffy called. If Liam ended up back with Hope, Steffy would have some serious competition on her hands.

Nevertheless, we have to consider the possibility that Liam will keep at it until gets what he wants. When it comes to women, Wyatt faces a constant streak of bad luck. He might be the one who turns to Ivy or Hope for comfort. Stick with “The Bold and the Beautiful” for updates on how things will pan out.

So B&B fans, what do you think about the news that Steffy will feel stuck in Wyatt and Liam’s rivalry? Will Steffy stay with Wyatt or reunite with Liam? Could Ivy or Hope catch the eye of a Spencer brother again?