BY Heather Hughes on April 18, 2016 | Comments: one comment
Related : Soap Opera, Spoiler, Television, The Bold and the Beautiful 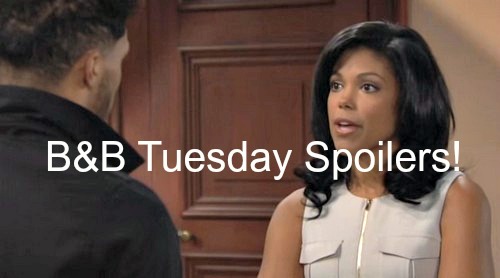 “The Bold and the Beautiful” (B&B) spoilers for tomorrow’s episode, Tuesday, April 19, tease that Wyatt (Darin Brooks) will feel like it’s time to tell Liam (Scott Clifton) the truth. He needs to know that Wyatt and Steffy (Jacqueline MacInnes Wood) are married now. Steffy will agree that they can’t hide their secret any longer.

However, Steffy will believe she needs to be the one to break the news. It’s going to be tough, but it’s important that Liam hears it from her. Meanwhile, Liam will decide he’s ready to propose to Steffy again. After everything that’s happened, Liam will think it’s the right thing to do.

He’ll ask Bill (Don Diamont) if he has his blessing to make Wyatt his best man.

Bill will probably realize that it’s not his place to blab. He’ll stay tight-lipped and let Steffy explain this mess. Later, Liam will ask Steffy to spend the rest of her life with him and she’ll be forced to drop the bomb.

B&B spoilers reveal that Liam will be devastated when he finds out Steffy is already taken. To make matters worse, Liam’s own brother rushed Steffy to the altar. This is going to be a difficult blow, but Liam will quickly become determined to reclaim his life.

Other “Bold and the Beautiful” spoilers say Maya (Karla Mosley) will give Zende (Rome Flynn) a hard time about moving on with Sasha (Felisha Cooper). Zende will admit that he’ll always love Nicole (Reign Edwards), but Maya will think he has a funny way of showing it.

If Zende cares so much, why is he with Nicole’s former best friend?

Across the hall, Vivienne (Anna Maria Horsford) will try to talk some sense into Sasha. Since Vivienne has known Sasha since she was a child, she’ll want to be as gentle as possible. Love is a tricky game, but Vivienne will likely wonder if Sasha would be willing to let Nicole win this round.

Sasha will be outraged that Vivienne expects her to put her life on hold just because Nicole did. It’s clear that we’re dealing with a lot of intense emotions here. Sasha is someone who knows what she wants. She’s not going to give it up for Nicole’s sake.

Stick with “The Bold and the Beautiful” for updates on Sasha’s fight to keep her man.

So B&B fans, what do you think about Liam’s new proposal? Will Steffy have major regrets about marrying Wyatt? What about all the confrontations over Zende? Will Sasha convince Zende to stand by her?